The two sides of the CCS debate go head to head - should CCS be backed or sidelined?

The two sides of the CCS debate go head to head - should CCS be backed or sidelined?

No, we don’t need CCS

Carbon capture and storage (CCS) is a possible technology to mitigate anthropogenic carbon dioxide emissions to the atmosphere. CCS includes multiple methods to accomplish the goals of capturing, transporting and storing CO2; most such efforts focus on fossil-fuel-based power generation. Primarily because of its high cost and environmental issues, CCS will face considerable obstacles. Several economic and technical challenges must be overcome for CCS to compete with alternative energy strategies for CO2 emissions avoidance.

To better understand the relative importance of the cost of CCS and its effectiveness in avoiding CO2 emissions, we performed a comparison of carbon avoidance via CCS and using alternative energy technologies.1 In this comparison, the resources that would be spent on CCS were instead used to develop alternative energy capacity - specifically wind, nuclear and geothermal power - a concept called ’virtual CCS’. This comparison was designed to rank CCS and alternative energy technologies according to the effectiveness and cost of avoiding CO2 emissions. The calculations involved in this simulation determined the cost of performing CCS on a globally significant mass of CO2 emissions by considering the wedge concept of Pacala and Socolow.2 Specifically, we considered 100 billion (giga) tonnes (GtCO2) to be avoided over 50 years as the basis for comparison. Pacala and Socolow proposed to divide anthropogenic CO2 emissions into ’wedges’ to facilitate the implementation of a portfolio approach to solving the CO2 problem. Global emissions were estimated at 30 GtCO2 for the year 2010, assumed to increase linearly over time, and expected to double by 2060. Stabilising the emissions at 2010 levels would require 800 GtCO2 to be avoided in the next 50 years. Assuming $51 (?33) per tonne of CO2 (tCO2) avoided via CCS, an estimate based on the 2005 International Panel on Climate Change (IPCC) report for a new coal-fired power plant,3 we estimated the cost for one wedge of CCS to be $5.1 trillion. For virtual CCS, this means that $5.1 trillion spread over 50 years could be utilised to build, maintain, operate and decommission alternative energy installations such as wind farms, nuclear plants or geothermal plants.

All three alternative energy technologies considered were found to be much more cost-efficient than CCS at avoiding CO2. The carbon avoidance ratio (ie the CO2 amount avoided by a $5.1 trillion investment in alternative energy over 100 GtCO2) was determined for each technology using CCS as a base case. Wind, nuclear and geothermal power had CO2 avoidance ratios of 1.9, 4.3, and 4.5, respectively. In order for CCS to be competitive with wind and nuclear, the cost of CCS must be improved to $26/tCO2 and $12/tCO2, respectively. In addition to better CO2 avoidance on a per-dollar basis, alternative energy technologies also resulted in revenue, while CCS has no significant revenue. Wind, nuclear, and geothermal power were estimated to result in revenues of $9 trillion, $22 trillion, and $31 trillion, respectively, for a $5.1 trillion investment over 50 years.

Our results show that, with current technology, CCS is less effective than alternative energy in avoiding CO2 emissions. We can most effectively address this issue by pursuing virtual CCS, including investments in energy efficiency, renewable energy, nuclear energy, and biofuels until research in CCS (which also faces significant thermodynamic issues4) makes it competitive with alternative energy.

Costas Tsouris and Douglas Aaron are at the Oak Ridge National Laboratory and Georgia Institute of Technology, US 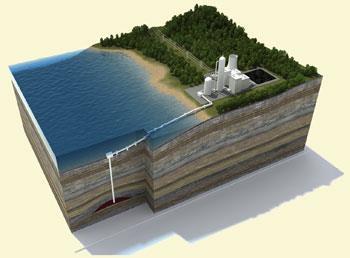 Yes, CCS is sensible and necessary

Costas Tsouris and Douglas Aaron question whether CCS is really needed to help reduce the amount of CO2 pumped into the atmosphere; suggesting that we may do better to invest the funds it will take to capture and store carbon in the development of renewable energy sources. We argue that, rather than investment in development of renewable energy techniques as an alternative to spending on CCS, the activities are complementary and necessary in the short to medium term (next 50 years) to ease the transition and maintain stability of supply.

Superficially, Tsouris and Aaron’s premise seems reasonable. Why should we do anything that does not make a profit? Fundamentally, burying something in the ground and not using it cannot make a profit whether it be CO2 or gold. Similarly, cleaning polluted rivers is intrinsically not profitable, nor is saving whales or having a state health service. Closer to home, the weekly visit of the dustman does not make a profit. Instead it provides a service at a cost. We pay to have our rubbish cleared away so that it does not accumulate in our neighbourhood. CCS is the same principle.

A key piece of Tsouris and Aaron’s argument is that for a given investment we would have twice as much impact on CO2 emissions reduction by investing in wind energy than we would have by installing CCS. In a deft move he has admitted that prices may be volatile but using the best cost estimates today give this 2:1 leverage for wind (nuclear is even better). Balderdash!

This is akin to comparing whale oil and mineral oil prices in the late 19th century. Whale oil was cheaper than mineral oil, meaning mineral oil required an initial fillip from government. But shortly thereafter the industry took off and prices fell dramatically as technology improved and the cost base lowered. The same has happened with computers, mobile phones, 3D seismic acquisition and so on and it will happen with CCS, a highly immature technology when compared with wind power.

Pacala and Socolow5 demonstrated the scale of the global CO2 emissions in an elegant way, splitting the seemingly unmanageable task of stabilising output of CO2 into seven huge but probably manageable wedges each of which could be tackled with the technology available today. Their key point was that no single technology could deliver all the required reduction of emissions. Since publication of their paper in 2004, CO2 emissions have continued to rise. What was seven wedges in 2004 is now eight wedges in 2010.6 We are getting further behind. Action is urgently required but what can we do now which will allow business to continue as reliably as usual - increase wind power 40 fold, increase solar power 700 fold while simultaneously reducing dependency on coal by a similar amount and halving the fuel consumption of two billion cars? Of course we must improve the efficiency of our energy consumption as well as further developing solar, wind, wave and other renewable power sources, not to forget significantly reducing deforestation. But will fossil fuels cease to be used in the short or even medium term? No, fossil fuels are just too easy to use. The physical, social and legislative infrastructures are well established. The energy concentration is too dense for an energy hungry world to ignore, even if finding new deposits of light oil (and gas) is getting ever more difficult.

We accept that a sustainable future demands that we switch to renewable energy sources as fast as possible. In the meantime CCS provides a way to minimise emissions of greenhouse gases.

Jon Gluyas is chair in geoenergy at Durham Energy Institute, University of Durham, UK; Susie Daniels is at Geospatial Research in the university’s department of earth sciences