Cities are hotbeds of creativity. In the hubbub of the market, the coffee house and the office, connections between individuals are forged and buzzing exchanges nourish new ideas. In the great cities of the world, ambition, finance, competition and connectivity have combined to produce sudden, spectacular flowerings of creativity, from Athens to Tenochtitlan, from Baghdad to Florence and Shenzhen.

Living in London one is acutely aware of this – and not simply the current dynamism of the intellectual and business life, but the persistent recurrence of innovation and invention through time. 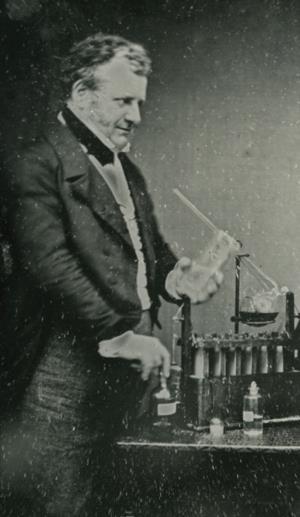 John Daniell (1790â€“1845). British meteorologist. Inventor of the eponymous cell that is in all schoolbooks on chemistry

Although sometimes parodied with the effete dandyism of Beau Brummel, the Regency, at the start of the 19th century, was a time of rampant wealth-creation and rapid economic growth. One of the beneficiaries was John Daniell, whose father was a London lawyer. Daniell was educated privately and as a teenager came across Adam Walker, an itinerant lecturer whose course in science, covering optics, magnetism, chemistry and astronomy, probably gave Daniell the science bug.

At 18, Daniell was hired in a relation’s sugar works where he applied his ingenuity to improve the process – he would later patent a method for clarifying sugar by adding lead salts – but at the same time he attended Hunter’s Great Windmill Street Anatomical School where Thomas Brande lectured on chemistry. The two got on famously; when Brande succeeded Humphry Davy as professor at the Royal Institution (RI) in 1813, Daniell became an annual member. There he met Michael Faraday who would also become a lifelong friend.

It must have been an incredible time. Davy had just completed his run of electrical experiments, and his battery – a Voltaic pile to end all piles, consisting of some 2000 plates of copper and silver – had unlocked a slew of new elements. Daniell’s association with Brande led to his being elected a fellow of the Royal Society (RS) and then appointed as manager of the RI in 1815.

Daniell married in 1817 and moved into a house on Gower Street on the newly developing edge of London. He began to strike out on his own scientifically, working alongside Faraday on ‘lampic acid’ but also developing a strong interest in meteorology. He devised a system for maintaining methodical weather records and a new dew point hygrometer; he would eventually build a huge water barometer for the Royal Society. His 1827 textbook of meteorology was among the first to relate weather phenomena to fundamental physics and chemistry. During this time Daniell kept his family afloat with a series of commercial appointments and consultancies, often alongside Brande.

But he really wanted to do science. When King’s College London was established in 1830, a search committee was set up for a professor of chemistry. Daniell was one of several applicants, including Andrew Ure, Thomas Graham and, somewhat cheekily, Edward Turner, who already held the chair at University College. That Daniell was selected was in part due to the intervention of another connection, the poet Samuel Taylor Coleridge, who was a good friend of both Davy and of Daniell’s sister Georgina Louisa. When the college council met to finalise the appointment, it was agreed that he would need £500–600 to set up his laboratory; they gave him £300. 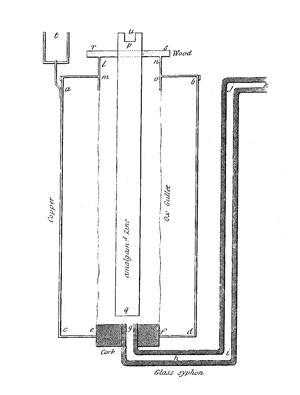 Daniell set to work immediately. He developed an improvement of Guyton de Morveau’s pyrometer for which he was awarded the RS Rumford medal. He also made the first observation of vibronic structure in the visible spectra of the halogens. But it was while repeating some of Faraday’s experiments on electrolysis that he was struck by the limitations of the Voltaic pile: the current dropped off rapidly. Daniell designed a new cell consisting of a copper vessel filled with copper sulfate solution. Into this he suspended an ox gullet containing a zinc rod immersed in dilute sulfuric acid. It worked – the current remained steady, and with his new cell (replacing the gullet with a more convenient porous earthenware tube, and the acid by zinc sulfate) he verified Faraday’s theory of the equivalence of chemistry and electricity.

This work earned him the RS Copley medal in 1836, and his experiments established that it was the dissolved salts and acids that mattered in electrolysis, rather than the water. He also formulated the oxyanions of carbon, nitrogen and sulfur as distinct entities. He was awarded the RS Royal medal in 1842, a hat trick that has yet to be replicated.

Daniell died suddenly at an RS meeting in 1845. By then, his battery had spawned not just the electroplating industry, but more importantly, it powered Charles Wheatstone’s telegraph along which dense flocks of ideas would start to fly, like starlings, across the globe.

Today, people are still moving to the cities and more of us live in them than anywhere else. The ferment provided by proximity has become ever more intense. But the rise of the internet, with its myriad ways of linking individuals together, now provides additional layers of connections that promise us more Daniells in the future.

Thanks to Hasok Chang, Katherine Holt and Daren Caruana for their advice and suggestions