Or: How I learned to stop worrying and love Twitter

I’m a chemist who loves conversation. Some of my favourite times in the lab have been at the end of the day, talking to labmates while TLCing fractions and vaccing down what I hope will be something vaguely pure. Whether it’s a chat about their day, the chemistry they’re up to or just life in general, those conversations have gotten me through some of the toughest times in my life as a chemist. 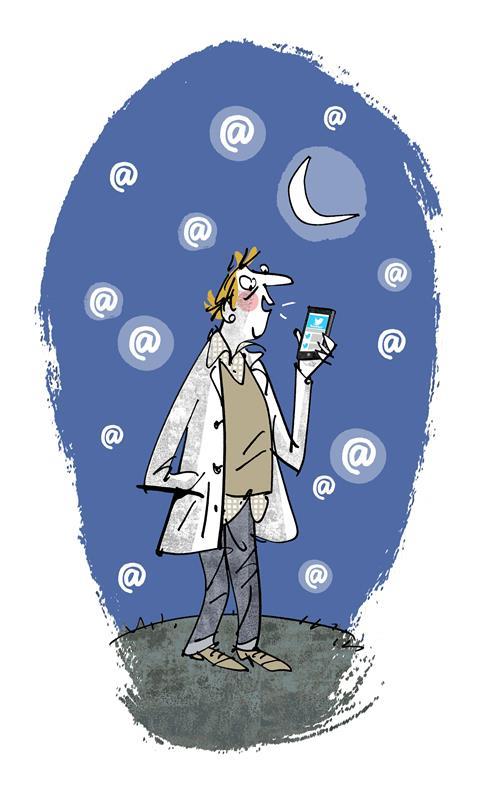 It’s surprising, then, that I was late to social media. My first foray into Twitter was in David Leigh’s lab (@ProfDaveLeigh). My more techno-savvy lab mates Guillaume De Bo (@GuillaumeDebo) and Miriam Wilson (@miriamrwilson) always seemed to know what was going on before everyone else. I asked how and the answer always seemed to be ‘on Twitter’ – so I thought I’d see what it was all about.

For the uninitiated, Twitter is a live messaging website, where you can post messages, links and pictures of currently up to 280 characters (a ‘tweet’). You can follow other users’ accounts (all collected in chronological order on a news feed), and, in turn, people can follow yours. At first, I hadn’t a clue what was going on: it was as though I had dipped my toe into what appeared to be a sea of equal parts cat memes and puns. I followed the accounts Twitter suggested and gave my phone to an experienced friend, @sineadfaced, to find accounts I should follow. I occasionally liked (gave imaginary Internet points for) or retweeted (shared on my timeline) things that caught my eye. But I didn’t start posting items myself for a couple of months – mainly because I didn’t think anyone would be interested in what I had to say, or that I would invoke the wrath of a Twitter mob with an off-the-cuff remark.

At first I got it all wrong. A good deal of my first few months on Twitter involved a hefty dollop of shameless self-promotion – tweeting about my papers and talks. I rapidly found that this was incredibly dull – just another admin job I had to do as a modern researcher. My activity on Twitter dwindled. Did I really need another thing to distract me from what I was supposed to be doing?

My interest was rekindled after finding three accounts. I was expecting Stuart Cantrill (@stuartcantrill), editor of Nature Chemistry, to be a dry, serious voice. Nothing could have been further from the truth. He made jokes, often with a hefty dose of sarcasm; he tweeted his thoughts, even if they were controversial; he shared personal parts of his life. The same was true for organic chemist Nessa Carson (@SuperScienceGrl) and materials scientist Paul Coxon (@paulcoxon) – both shared their experiences not just as scientists but as people too. More accounts followed – industrialists like @AlexFGoldberg and academics like @professor_dave and @leecronin always had something interesting to say. The job market seemed plentiful thanks to @Chemjobber. I laughed at jokes from @TehshikYoon. Most importantly, they all interacted with other people – social media, I had learned, was supposed to be social.

I started sharing my thoughts more freely. I commented on people’s tweets. I shared my personal life as well as my professional activities. And my experience totally changed. At conferences and meetings, people started chatting with me because we’d exchanged tweets. Social media has led to new collaborations and new friends. It’s made me more accessible to my students – both current and from the past. And it’s helped me feel like I’m part of a conversation, not just about science but all the things that are important to me.

I still tweet about the science I do – and Twitter helps me keep up with the work of my friends and scientists who work in my area. My news feed is like my own personal table of contents, spread across all journals and interspersed with commentary from scientists and friends whose opinions I respect. Twitter has become the main source I use to keep up with the current literature, and also my main source of comic science-related GIFs.

It can be lonely as a new PI, but chatting on Twitter makes me feel connected to my friends all over the world. Whether it’s a Tweet from @cathleencrudden in Canada, my old colleagues in Ireland (@BlanaidWhiteDCU and @andrew_kellett) or the far-flung and always entertaining now Aussie @all_isee, I feel like I’m back in the lab with them. It really doesn’t matter how late I’m up: someone, somewhere, is always vaccing down.