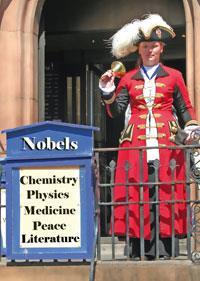 Gunnar von Heijne of the Royal Swedish Academy of Sciences didn’t mince his words when he announced the 2009 winners of the Nobel prize in chemistry, saying the laureates had ’accomplished what many scientists thought impossible’ in determining the three-dimensional structure of the molecular machine that makes all the proteins in a cell, the ribosome.

Once again, the prize is split between several winners, so the SKr10 million (?880,000), along with the honour and recognition that go with the award, will be shared by Venkatraman Ramakrishnan of the Laboratory of Molecular Biology in Cambridge, UK, Thomas Steitz, of Yale University, US, and Ada Yonath, of the Weizmann Institute of Science in Israel.

However, October not only saw the announcement of the Nobel prize winners but also, as it is now customary, the controversy and division of opinion that followed the news.

The decision to award US President Barack Obama the Nobel peace prize, for example, was surprising and stirred praise and criticism in equal amounts. The criticism? Many, perhaps quite simplistically, assume that the prizes are awarded to acknowledge accomplishment, and argue that with Obama in post for less than 10 months, the honour may be premature. The Norwegian Nobel committee, however, felt the award was appropriate in light of Obama’s ’extraordinary efforts to strengthen international diplomacy and cooperation between peoples,’ which has helped create ’a new climate in international politics’.

Although undoubtedly the most high-profile case, debate was not limited to the Peace prize. This year the chemistry prize seems to have once again caused a bit of a commotion. The criticism? Well, some in the scientific community have suggested that the research had too strong a biological focus. There are others, however, who see this as an oversimplification and maintain that chemistry is still at the core of this research. Understanding life and resolving any biological questions involves working with biology at the molecular level and this is an area where chemistry and its laws are fundamental to explain and interpret the processes of life. Right? I’ll let you make your own mind up.

Interestingly, with awards in medicine and chemistry but not biology, this dispute touches on a wider ongoing debate - the breadth of the Nobels. To put it into context, when Alfred Nobel wrote his last will in 1895 and left much of his wealth to establish the Nobel prize, he envisioned just five categories: medicine or physiology, chemistry, physics, literature and peace. The Sveriges Riksbank prize in economic sciences in memory of Alfred Nobel was added in 1968, but is externally funded.

However, science has changed a great deal since then and it has become apparent that many disciplines do not fall clearly within the remit of the existing prizes. It’s a recurring issue, and yet again scientists have petitioned the Nobel Foundation to reform the prizes to reflect today’s science and to be able to reward those who work in areas ostensibly somewhat removed from the current prize categories.

So if the foundation were to act on this suggestion, would the controversy stop? I doubt it. it is the Nobels after all!