The winners of the Ig Nobel awards were announced on 29 September. It’s been said - with a hint of sarcasm - that these awards are the highlight of the scientific calendar. You can judge for yourself: the 2011 chemistry prize was awarded to a group of researchers in Japan for inventing the ’wasabi alarm’, a system that sprays the said substance in a concentration such that it will awaken sleeping individuals in case of a fire or other emergency.1

More seriously, the true highlight of the scientific calendar took place a few days later - from 3 October - when the Nobel prize winners were announced. And so, on 6 October came the news that the 2011 Nobel prize in chemistry had been awarded to Daniel Shechtman at Technion in Haifa, Israel, ’for the discovery of quasicrystals’.

The announcement was well received by the scientific community - despite the relative obscurity of the field - because his tale is one of perseverance and determination. For many years he bravely faced scepticism - at times open hostility - from critics, who believed he had made a mistake. He was famously branded a ’quasiscientist’ by double Nobel laureate Linus Pauling. 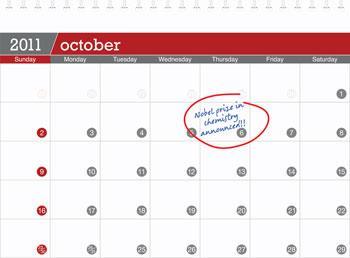 So, together with the recognition, he has won SEK10 million (?952,000), which we hope he enjoys and spends wisely. Indeed, looking at how some Nobel prize winners have spent their money is a fascinating exercise. From the remarkable, to the dedicated to the plain extravagant:

The remarkable: Albert Einstein famously spent all his Nobel money on his divorce papers, leaving it to his ex-wife and two sons. The circumstances are quite remarkable though: he won the Nobel prize in physics in 1921, but he left the money to his wife in a document signed in 1919. Was this an act of boldness or extraordinary foresight?

The dedicated: Marie Curie is still, to this day, one of only two people to have ever received two Nobels in two different categories: first in Physics in 1903 for her work in spontaneous radiation - she shared this with her husband Pierre Curie and Henri Becquerel - and the second in Chemistry in 1911 for discovering radium and polonium. She spent her money how you’d expect her to: on her research into radioactive elements, which likely caused her untimely death. We are, of course, nearing the end of the International Year of Chemistry, which marks the centenary of her second Nobel (See Chemistry World, January 2011, p42).

The extravagant: Biogen founder, Phillip Sharp, shared the 1993 Nobel prize for physiology or medicine with Richard Roberts of New England Biolabs in Beverly, US, ’for their discoveries of split genes’. Sharp spent his half of the money on an old Federalist house, while Roberts - as well as donating to his school - installed a croquet lawn in his garden.

Interestingly, Pauling is the other person, besides Marie Curie, to have won prizes in two categories (chemistry in 1954 and peace in 1962) and remains the only person to have two unshared prizes. For him, the money meant he could resign from the California Institute of Technology and dedicate all his energy to campaigning against war - and particularly nuclear weapons - which he continued to do until his death. I’m sure Shechtman will be able to forgive him for his scepticism.