There will be mutterings of unrest in the corridors of the US Food and Drug Administration (FDA) this month. Its authority has been questioned after a study published in the New England Journal of Medicine  (NEJM) brought to light cardiovascular risks associated with GlaxoSmithKline’s diabetes drug, Avandia. 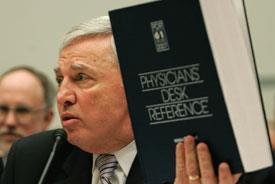 The FDA came under heavy fire in 2004 for its apparent mishandling of the regulation of Vioxx - Merck’s subsequently withdrawn arthritis drug. Yet a new leaf appeared to have been turned over earlier this year. In May, the US Senate passed a ’revitalisation act’ to reinforce the FDA’s powers. The legislation is yet to pass through Congress, and recent events could stimulate some important amendments to restore public trust.

As it stands, the new law will empower the FDA to increase ’user fees’ paid to the agency by companies for assessment of their products. But the fact that the FDA’s assessment relies on industry funding at all has caused consternation. Critics argue that a conflict of interest exists within the organisation because it regulates the very industry that pays for its existence.

Valuable changes were made under the act, including the expansion of a database of clinical trials, which will be made freely available to the public. But this will be of little value if the regulator itself is not transparent in its use of this data during the decision-making process.

Panic-stricken headlines about Avandia have damaged the FDA’s reputation once again. This time it was quick to respond and a safety alert about the drug immediately followed the publication of the NEJM  study. A congressional hearing was convened to examine the FDA’s role in the regulation of Avandia. No official conclusion was drawn as to whether or not the agency did its job properly, but the hearing did spark some revelations.

FDA commissioner Andrew von Eschenbach (above) attempted to subdue suspicion of a lack of vigilance by announcing at the hearing that a severe ’black box’ warning had been added to Avandia’s packaging. Yet this box warned of a risk of congestive heart failure - a different side effect that had shown up in clinical trials more than a year earlier. One FDA staff member, Rosemary Johann-Liang, who recently left the agency, revealed that she had recommended the black box in February 2006 and was disciplined by her superiors as a result. The FDA has not confirmed this but the question remains; why delay such an important decision for so long?

This month, the FDA announced a plan for increased cooperation with the European Medicines Agency (EMEA), including more sharing of safety data. This is an important step, but the FDA has an additional burden that the EMEA doesn’t : its approved products are often directly marketed to consumers. This puts more responsibility for patient protection on the shoulders of the agency. In Europe, where medications are marketed to healthcare professionals, it is easier to communicate risks.

It is in pharmaceutical companies’ interests to ensure products are as safe as possible for patients. In the Avandia case, clinical evidence from GSK was not lacking. But if a regulatory body does not act on the data it receives and it emerges that patients have been put at risk, nobody benefits (except the lawyers). The revitalisation act and this unpleasant wake-up call gives the FDA an opportunity for a crucial overhaul.