The Nobel prize for chemistry 2010 went to Ei-ichi Negishi from Purdue University, US, Akira Suzuki from Hokkaido University, Japan, and Richard Heck from the University of Delaware, US, for the development of palladium-catalysed cross coupling reactions (see p28). It was felt by many in the chemistry community, especially among synthetic chemists, that this was a much deserved and long awaited award. For them the Heck, Negishi and Suzuki couplings revolutionised the chemistry of C-C bond formation, both in academic and industrial synthesis, opening the gateway to the preparation of a myriad compounds with applications in medicine, agriculture and many other fields. 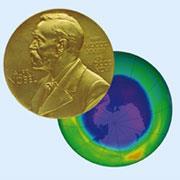 But chemistry scooped a second Nobel this year thanks to graphene. The Nobel prize for physics was awarded to Andre Geim and Kostya Novoselov from the University of Manchester, UK, for the discovery of this versatile compound (see p12). Interestingly, the winners candidly confess that their discovery was made by chance as a ’fun Friday afternoon project’. This is quite a refreshing admission that shows at the same time humility and perhaps a naivety that is appealing and charming and hopefully inspires many. It also shows that there is still research in today’s labs that allows the mind space to play, and not be constrained by focusing solely on applications-driven research.

The United Nations climate change conference in Cancun, Mexico, this month has renewed my interest in the state of health of the ozone layer. Apparently, it is still in intensive care but the long-term prognosis is good. In fact, it is estimated that it will be back to pre-1980 levels by 2060 in most regions of the world. But for the Antarctic, recovery is expected by 2075, according to a report from the World Meteorological Organization in collaboration with the United Nations Environmental Programme.

This recovery is in part thanks to the excellent treatment provided by the Montreal Protocol, a treaty that has been a great success on several fronts. Firstly, it has succeeded in getting all governments around the globe to commit to reductions in the production and consumption of ozone-depleting substances. Secondly, it has proved that developing countries are ready and able to contribute to the global efforts to protect the environment given the right kind of assistance. Thirdly, it has avoided a public health crisis as, had action not been taken, increasing atmospheric levels of ozone-depleting chemicals would have potentially led to millions more cases of skin cancer and eye cataracts. Finally, measures taken to reduce the amount of ozone-depleting chemicals during the last decade - many of which are also powerful greenhouse gases - have avoided the release of 135 gigatonnes of CO2 into the atmosphere, five times the reductions targeted in the first commitment period (2008-2012) of the Kyoto Protocol (see p10).

Kyoto never got the same level of commitment. The issues and interests embedded in the climate change debate are arguably vastly more complex. But those taking part in the Cancun meeting should still try to learn from the success of Montreal - what can we do to repeat this?