In about 1910, the great Austrian physicist Lise Meitner was looking into the eyepiece of her electroscope. It was charged, as shown by the divergence of its metal leaves. A knock sounded on the door – the postman. Simultaneously, the electroscope leaves began to collapse together – the air had become conducting, one of the effects of radioactivity. Without taking her eye from the electroscope, Lise told the postman ‘You have a letter for me from Manchester.’ He did too, from that Mancunian pioneer of radioactivity Ernest Rutherford. In those distant days, scientists sent each other terrifyingly radioactive samples by ordinary letter post. By contrast, we are nowadays very frightened of radioactivity. A modern insurance contract I am looking at has, among its many exclusions, one which refuses any claim caused by ‘ionising radiation or radioactive contamination from nuclear fuel or nuclear waste, or any risk from a nuclear device or other nuclear equipment’. These days Rutherford, Meitner, and the postman would have all voided their insurance, and Rutherford might have broken the law. 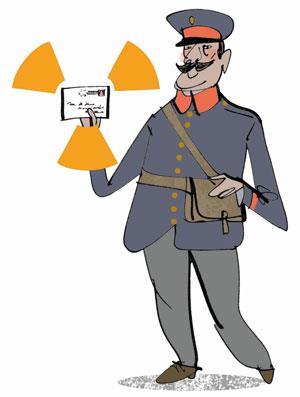 Lise Meitner was a unique scientific thinker. Einstein called her ‘The German Madame Curie’ and she rose to a high position in the Kaiser Wilhelm Institute for science in Berlin. But she was a Jew, and the Nazis opposed her. She fled to Sweden in 1938. In 1939, she and her nephew Otto Frisch heard how her previous collaborators at the institute, Hahn and Strassman, had analysed a sample of uranium that had been bombarded with neutrons and had found a trace of barium. In a famous discussion, Meitner and Frisch realised that this must have come from the fission of the uranium nucleus, and would have liberated a vast amount of energy. They even wrote a paper to Nature on the idea. But soon the whole topic was wrapped in secrecy, and later the hectic American work on the atom bomb began, for the second world war had started. Many physicists feared that the Germans would make an atom bomb first.

Hahn was awarded a Nobel prize for his discovery. Meitner and Frisch, who worked out what it meant, got nothing. Somehow they were overlooked by the Nobel prize committee. And yet a belated effort has since been made to recognise their achievement.

One of the games played by modern physicists is an attempt to extend the high end of the periodic table, well beyond its usual limit at element 100 or so. Unstable superheavy elements can often be made one atom at a time by firing well-chosen nuclei at each other. Sometimes a pair will stick together. The new heavy nucleus will soon accumulate enough circulating electrons to become electrically neutral. The result: a new element! Of course, the newly-made nucleus is radioactive. It generally decays in less than a second and chemistry on it is almost never possible. Physicists continue to dream of an ‘island of stability’, with a really heavy element that might be stable enough for us to study its chemistry; but that island continues to get heavier and more elusive. Meanwhile, the new transient elements have to be named. They are often named after notable scientists. Thus we have Einsteinium, Fermium, Mendelevium, Lawrencium, Rutherfordium and so on. In the 1970s it was planned to call element 105 Hahnium but the naming commission changed its ideas. Element 105 became Dubnium, after Dubna, where the Russian Joint Institute for Nuclear Research is sited (it has made many superheavy elements).  Hahn was not celebrated in the periodic table and element 109 became Meitnerium.