Combustive chemistry to light up the holiday season

The end of the year brings cold weather and dark evenings, but it’s also a time for celebrations and ceremony. As a youngster, I remember hearing the stories behind the various festive celebrations at school. Of all the tales I heard, one in particular stayed with me: the miracle of Hanukkah.

The story of Hanukkah begins in the 2nd century BC, in the wake of the Maccabean revolt. Having fought a successful revolution against the Greeks, the Maccabees, a Jewish rebel army, returned to liberate Jerusalem. Upon entering the city, the soldiers found the holy temple in ruins. Before the Greek occupation, the temple had been the centre of Jewish religious life. It was home to the menorah, a seven branched candelabra that stayed alight day and night. Amidst the destruction, the Maccabees found a small vial of oil and relit the menorah. And then, unexpectedly, a great miracle occurred. The oil, only enough for a single day, kept burning for eight days straight.

Stories and miracles aside, it’s worth sparing a thought for the chemistry behind this biblical tale. The source of the menorah’s glow is perhaps the first chemical process to be harnessed by man – combustion. Upon lighting the lamp, an exothermic reaction occurs between the fuel – oil – and the oxidant – atmospheric oxygen. Both heat and light are produced, giving a nice, hot flame, or in the case of the menorah several nice, hot flames. In Hebrew scripture, the oil used to light the menorah is described as pure olive oil. 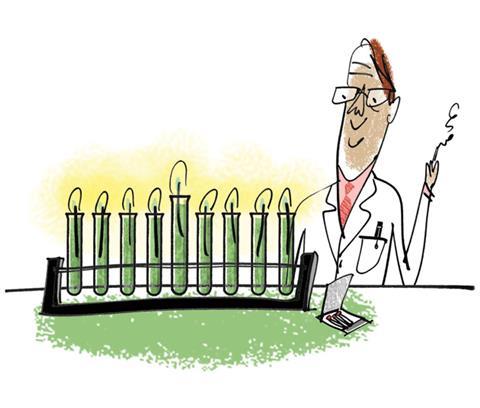 A simple lamp is made by adding a wick to oil and setting it alight; a design that has been used by humans since antiquity. Olive oil is particularly good for lamps because the temperature at which it will give off enough vapour to ignite – its flash point – is high, so the pool of oil itself won’t catch alight easily. Of course, if you want the lamp to burn indefinitely, the oil must be refilled on a regular basis. A small vial of oil, enough for a night, would not be able to burn for eight days without a top up – hence the miracle in the Hanukkah story.

Today, most observers of Hanukkah don’t celebrate it using an oil-based lamp, but by lighting candles. Rather than olive oil – which is perhaps best reserved for culinary purposes – modern candles use solid wax (a mixture of hydrocarbons) as a fuel, which can be moulded into decorative shapes, sizes and colours.

Of course it’s also an important time of year for Christians, and during Christmas celebrations, other ‘fuels’ come into their own. The great tradition of flambéing the Christmas pudding uses brandy, which burns with a virtually colourless flame with a bluish tint. Not only does this produce a spectacular visual effect when you turn off the lights, it also makes for a tastier pudding, as the alcohol rapidly burns off leaving the other brandy flavours behind. And of course no Christmas meal is complete without pulling crackers. These use a cardboard strip coated with silver fulminate, an explosive that is detonated by the friction of sandpaper on a second strip when the two are pulled apart, producing the characteristic snap. And the celebratory bang of champagne party poppers is the result of a small amount of gunpowder paste, again ignited by friction when the string is yanked out.

Despite the familiarity of these customs, there is something magical about watching a lamp or candle burn with dancing flames. It is fitting that within this beauty, some simple but wonderful chemistry can be found.