Scientists in Russia and the US created elements 113 and 115 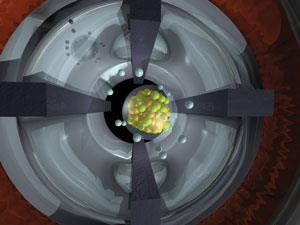 A team of scientists from the US and Russia claims to have successfully created two new super heavy elements.

The scientists from the Lawrence Livermore National Laboratory (LLNL), California, and the Joint Institute for Nuclear Research (JINR), Dubna, created elements 113 and 115 using JINR’s cyclotron to fire a beam of calcium-48 nucleii at an americium-243 target. Conducting their experiments in July and August last year, the team inferred the presence of the new elements from the atomic decay patterns produced by the collisions.

Element 115 was produced first and lasted for a few hundredths of a second before it transformed into element 113 as a result of alpha decay, which involves the loss of two protons and two neutrons. The team observed three similar decay chains, which terminated in the formation of an isotope of dubnium (element 105), an element with a half-life of 16 hours.

‘This just opens up the horizon on the periodic table’, proclaims Ken Moody, team leader at Livermore. ‘It allows us to expand the fundamental principles of chemistry. From new chemistry comes new materials and new technology.’

Ed. The US–Russian collaboration between the LLNL and the JINR, which still continues today, has resulted in five new elements – with atomic numbers 113–116 and 118.