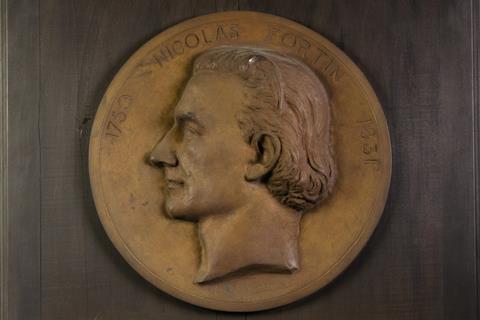 On a wall at the back of our teaching lab stores hangs a case, dusty and forgotten, containing an old black and silver barometer almost a metre in length. It is a relic of a former age when precise measurement of atmospheric pressure was not available in two clicks of a mobile phone. Built by the British scientific equipment house Griffin and George, a close look shows it to be a Fortin barometer – the screw at the base gives it away – the first truly portable mercury barometer. Today few will have heard the name Fortin, and fewer realise the critical role that he played in establishing chemistry as a quantitative science and in defining the metric system of units.

Jean-Nicolas Fortin was born in 1750 in the village Heilles, some 20km south of the town of Beauvais in France. He had two brothers, neither of whom survived to adulthood, and one sister. His father was a labourer, while his mother died when he was 12. He must have been apprenticed in some way but there is no known record of his education and training. Although it is sometimes suggested that he started by making globes, this is almost certainly the result of confusion with his contemporary Jean-Baptiste Fortin (no relation), a map- and globe-maker who published a French edition of the British astronomer John Flamsteed’s star atlas.

Nicolas Fortin made his name when he presented a hand-cranked double piston vacuum pump to the Academy of Sciences in Paris in 1779. Tested by Antoine Lavoisier and three coworkers, one of whom was Pierre-Simon Laplace, a brief report recommended the pump to the Academy, noting that the valves were positioned well away from the platform supporting the bell jar. Lavoisier would buy several for his laboratory and examples of Fortin’s pumps still exist, beautiful in their design and workmanship.

Lavoisier and his wife had recently nailed down the composition of water. Hydrogen was of considerable interest because of its low density. The Mongolfier brothers’ spectacular ascent in a hot air balloon in 1782 was followed only days later by a flight by Jacques Charles in a hydrogen-filled balloon made of rubberised silk. The excitement led the Academy of Sciences to commission studies to improve the preparation of hydrogen on a large scale, and to develop improved fabric to contain the gas. Fortin contributed a foil-backed fabric that was widely praised.

By 1784 Fortin had become one of Lavoisier’s trusted instrument makers alongside Pierre-Bernard Megnié, who had constructed the ‘gasometers’ that allowed Lavoisier’s group to weigh gases as they were absorbed or evolved for reactions. Although Fortin may also have made some of these, the evidence for this is a little ambiguous.

But he is certain to have made the apparatus for studying the combustion of oils, consisting of a copper reaction chamber linked through glass scrubbing tubes to four glass bulbs about 20cm in diameter. The entire apparatus is mounted on a wooden stand and the polished brass fittings are equipped with elegant winged stopcocks. It is a thing of beauty that is on display at the Musée des Arts et Métiers in Paris. For the commission, Fortin received 390 livres (approximately £5200 in modern terms). After seeing the apparatus in January, it struck me that the great portrait of Lavoisier and his wife, commissioned from the painter Jacques-Louis David around this time, includes a large round-bottomed flask with a fitting that looks suspiciously similar to those on the oil apparatus. Was it one of Fortin’s?

As Lavoisier’s work to quantify chemistry advanced, it became obvious that the balances he was using were not accurate enough. To compensate for this, Lavoisier had adopted double weighing, where each measurement was made twice, swapping the flask and the weights between the two pans, and taking the average value. Now, however, Lavoisier needed a balance on a different level of precision from what had come before. In the summer of 1788 he turned to Fortin for the job. 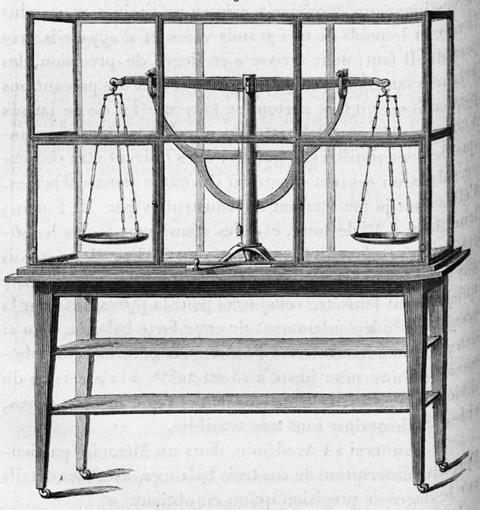 Fortin’s balance, with it’s accuracy of one part per million, was the prototype for future balances

Fortin delivered something truly exquisite that laid down the rules for future analytical balances. The balance itself was enclosed in a large rosewood box with glass sides and sliding doors to protect it from the least draught; Lavoisier ordained that it sit in a separate room to avoid the influence of corrosive vapours from the laboratory. Two large pans hung from the ends of a metre-long mild steel beam. A large lever at the base of the box could raise the beam using two arms connected to the central post, so that the beam was locked while being loaded. Sliding the lever gently lowered the beam onto a knife-edge made from wear-resistant quenched (martensitic) steel. A small microscope allowed the experimenter to read a pointer from outside the closed box. The balance operated to a precision of about one part per million. With it Lavoisier was able to draw the conclusion that underpins all of chemistry (but which he never actually wrote): Rien ne se perd. Rien ne se crée. Tout se transforme. (Nothing is lost. Nothing is created. Everything changes).

Fortin also delivered two other balances with smaller beams. Lavoisier was delighted, and described them in detail in his Traité Elementaire de Chimie, noting that ‘they combine all the corrections and conveniences one might desire. I cannot imagine any other, with the possible exception of one made by [Jesse] Ramsden, that can compare both in accuracy and in precision.’ It had cost 600 livres but was worth its weight in gold. Over the next 30 years, Fortin would make several other balances along the same lines for chemists like Louis-Jacques Thénard, Joseph-Louis Gay-Lussac and Michel-Eugène Chevreul. At least two of the balances still survive.

All of this equipment did not come cheap. Lavoisier had realised very early on that to do science would require serious means; with the help of his father he had bought a lucrative position as a partner in the Ferme Générale, the semi-autonomous corporation that collected certain taxes on behalf of the Crown. The French Revolution, when it came in 1789, would lead to disaster for Lavoisier. But in an unexpected twist it also laid the foundations of much more quantitative science.

In August 1789, the newly established National Assembly of France voted to abolish the feudal system of land ownership. The result was a collapse of the system of measurement which had been under the control of the aristocratic landowners and which, not coincidentally, had allowed them to rip off the farmers who worked the land. Amid the resulting chaos, the Bishop of Autun, Charles-Maurice de Talleyrand-Périgord, made a proposal as revolutionary as it was nerdy: a new unified system of measurement should be introduced. The Academy of Sciences was tasked with the creation of a new system of what Talleyrand called natural units.

King Louis XVI rubber-stamped the measure in 1790 and a commission to study the problem was set up. It was given the huge budget of 300,000 livres with Lavoisier chosen to administer the funds. A new unit, the metre, would be defined as 1/10,000,000 of the distance from the equator to the pole. This led to a survey that took several years of repeated triangulation to measure the distances along the meridian that runs from Dunkirk through Paris to Barcelona. One of the key instruments used for the survey was made by Fortin.

The task of defining mass was assigned by the commission to Lavoisier and René Just Haüy, who proposed that it be defined by the mass of a cubic decimetre of water, determined at the melting point. They made painstaking measurements in air and in vacuum, using a hydrometer designed by Fortin. The work stopped in 1793 as the Revolution grew in intensity, and the Academy of Sciences was disbanded. Lavoisier, Haüy, and several other members were denounced by the rabble-rousing journalist Jean-Paul Marat and arrested. As a leading member of the Ferme Générale, scurrilous pamphlets about Lavoisier were circulated both by revolutionaries on the left and by opponents on the right, and he was put on trial. While there is no record that anyone actually said ‘The Republic has no need for scholars and chemists’, the pleas of his colleagues fell on deaf ears. Lavoisier was executed in 1794.

After his death, Fortin, physicist Jacques Charles and the instrument maker Etienne Lenoir (another of Lavoisier’s artistes mechaniciens) were asked to make an inventory of Lavoisier’s lab. The collection included over 13,000 pieces of chemical and physical equipment, much of which was then spirited away to the Chateau la Caniere near Auvergne for safe-keeping. It later entered the collection of the Musée des Arts et Métiers. I would urge you to go and see it.

By 1795, as things calmed down, the commission was reinstated and the new metric system was enshrined in law. After the original determinations were rechecked, Fortin was tasked with making a provisional kilogram standard out of copper, a cylinder as wide as it was high, along with a special comparator to establish its dimensions. With the mass fixed, the King’s former jeweller Marc-Etienne Janetti was given 48kg of crude platinum from which he cast four prototype metres and four cylindrical kilogram weights. Fortin was tasked with adjusting the cylindrical kilograms using ‘his’ balances to check and recheck their mass, making meticulous buoyancy corrections. He returned one weight to Janetti because it was unsatisfactory.

Fortin’s work for the commission is well-documented and his signature appears in the minutes of the meetings where the étalons (standards) were presented and approved. He later worked extensively with the Paris Observatory and with the Office for Longitude. Both he and Lenoir made astronomical and surveying instruments, as well as further copies of the various étalons, including a metre standard for the Royal Society in London.

Once almost universal in laboratories, the Fortin barometer remains a design masterpiece

But Fortin had one last trick up his sleeve: a portable barometer. The barometer was constructed at the centre of a hinged wooden tripod that doubled as protection for the delicate glass parts when carried. To calibrate the barometer and ensure that the level of mercury at the bottom could be adjusted, Fortin equipped the cylindrical glass reservoir with an ivory pointer and a leather base. Turning the screw at the bottom pressed the leather upwards until the level of the mercury in the reservoir just touched the pointer. Hence the scale, read with a Vernier on a rack and pinion mounting, never needed to be moved. Fortin barometers were almost universal in laboratories until about 30 years ago.

Fortin was given many prizes and made Chevalier of the Légion d’Honneur in 1822. But he seems to have been a modest man who remained hands-on and never expanded his workshop; he worked with his daughter Marie-Josephine and no more than a couple of employees. After his death in 1831, he was gradually forgotten. In 1901, his remains were ceremoniously moved from a cemetery in Paris to his home village of Heilles where a monument was constructed. No trace of this remains aside from small plaque in his memory that stands at the junction of a country road, a small reminder of the critical role played by technical staff. Perhaps it’s a small thing, but isn’t it time to move the barometer back out into the lab where it belongs?