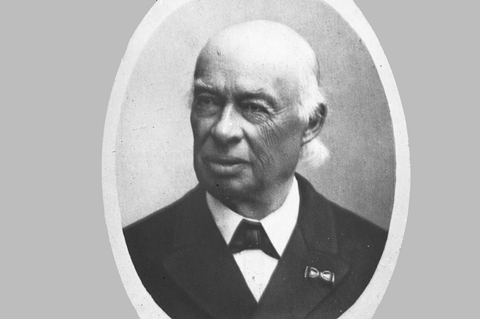 Qualitative analysis is one of the rituals that contribute to the education of a chemist. The older you are, the longer you will have spent in a lab doing a practical that pits you directly against a battery of test tubes. While some students love it, for many the sessions leave scars from stress, frustration and uncertainty. It is a lab class that emphasises method, attention to detail and technique, and is unforgiving of the hasty and the slapdash. Yet it is also one of the few practicals that approaches the epistemic uncertainty of research, or indeed of real life, where the conclusion to be drawn and best course of action to be taken are not listed in a model answer. But if today we see it as a useful practical experiment in thinking and inference, its origins were much more serious. It is to qualitative analysis that we owe a piece of kit as ubiquitous today as it is fundamental: the wash- or squirt-bottle.

Water analysis was one of the grand challenges of chemistry at a time when commercial interests were coming into conflict with consumer protection. Across 17th century Europe there were multiple claims of the curative powers of different ‘mineral waters’, and analytical chemistry came to be in great demand to verify and authenticate claims of aqueous superiority between different spa towns. Wet analytical methods that produced colour changes and formed precipitates from the metal ions in the water under test developed quite gradually as chemical elements were identified and their compounds began to be classified, analysed and understood. This disparate knowledge was finally pulled together at the end of the 18th century by Torbern Bergman in a textbook of water analysis.

Bergman’s approach was to boil water down to a solid residue. He then selectively dissolved and precipitated components in sequence using carefully selected and prepared ‘precipitants’, a long list that included mercuric chloride, soap, white arsenic and lead acetate. His book was translated immediately into several European languages and the challenge was taken up by chemists across Europe, who extended the number and range of tests. But a systematic principle for testing was missing.

In 1829 Heinrich Rose published his Handbuch der Analytischen Chemie. Rose introduced a revolutionary idea: reagents like chloride or hydrogen sulfide (under alkaline or acid conditions) would precipitate groups of metal ions, each of which could then be separated from the rest for final identification.

Rose’s ideas were highly influential, but were not laid out in a way that lent itself easily for use by a non-expert practitioner. A young chemist, Carl Remigius Fresenius, from the University of Bonn in Germany, began to teach himself mineral water analysis from Rose’s book in the laboratory of his professor Johann Marquart. Fresenius took to it like a duck to water.

Wrestling with the methods, he gradually developed a systematic way of working through the groups. Marquardt suggested that Fresenius summarise his method in a book, which earned him a doctoral degree and a position as Justus Liebig’s assistant at the University of Giessen. Fresenius’s book opened with all the technical instructions, from how to prepare reagents to what equipment would be necessary and how to use it. Fresenius spends three pages describing the apparatus required to wash a precipitate. 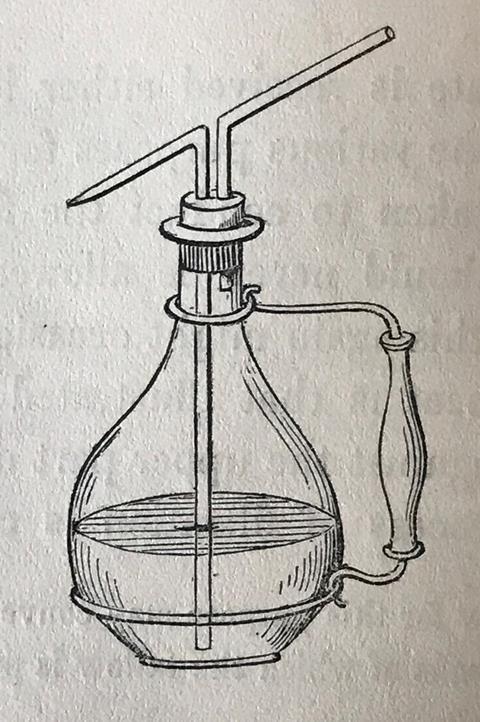 The device he recommends is a flat-bottomed flask, the cork bored with holes to accommodate two glass tubes, one long, one short. The end of the long one is bent and narrowed to a nozzle (later replaced by with a flexible rubber tube to direct the jet). The second, shorter tube is bent round to be colinear with the nozzle of the first tube. To wash a precipitate the chemist would pick up the bottle by a wired handle, point the nozzle at the precipitate and then blow gently through the shorter tube to squirt the water. Chemists would forever squirt water in the lab.

The book then laid out a simple and systematic sequence for analysis that could be used in teaching, or in business. It was so clear that it became a best-seller, especially with an introduction from Liebig himself. Fresenius soon had his own academic position and edited his own journal. His book ran to 17 editions in his lifetime, as well as being translated into English, Hungarian, Chinese and more.

The need for washing precipitates has never gone away. The wash bottle would continue to be used until the 1960s when squeezable polyethylene bottles replaced their glass forerunners and removed the need for chemists to put glassware in their mouths. And today they are ubiquitous. Even in computational chemistry suites are not immune – you’ll find them over by the white boards, ready for a squeeze and a splash.

I am grateful to Alwyn Davies for his memories of making his own wash bottle as an undergraduate in the 1940s.