Get with the quantum program

We stand at the threshold of the age of quantum computing. These fantastical machines, which promise to provide the kind of computing power that silicon chip makers can only dream of, are taking their first steps into commercial reality. At the moment, these infant quantum computers barely match a smartphone in terms of molecular modelling, but it’s clear that these capabilities will advance quickly. 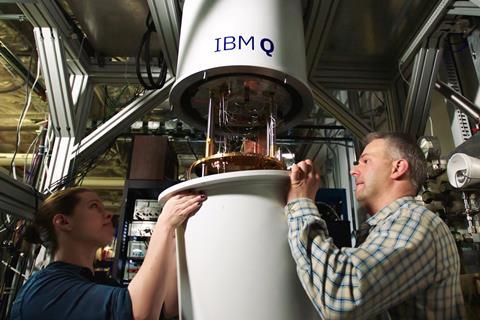 One of the most interesting aspects in the development of these machines from an academic curiosity into something really useful is the difference in the way they are programmed, and the kind of problems they are likely to be directed towards. Quantum computers will not supersede the traditional transistor-based computer on your desktop, but for tackling the problems for which they are suited, nothing else will come close.

That’s why it’s time for chemists to start paying attention. Up to now, quantum computing has been dominated by physicists, engineers and computer scientists who have designed and constructed the hardware and architecture. But it is chemists who have the knowledge and expertise needed to describe and define the quantum nature of the chemical problems that these machines are so adept at solving. Quantum computer software needs to be partially written in the language of chemistry.

So it is perhaps unsurprising that chemistry companies are leading the way in exploring quantum computers’ capabilities. This is partly because they have the resources and can afford to invest in this early stage, but one could equally argue that the potential rewards – in terms of competitive advantage – mean they can’t afford to sit on the sidelines.

Problems like catalyst design, complex reaction simulations, oilfield recovery modelling and the like are severely limited by conventional computing power. That’s why companies such as BASF, BP and Total have their own supercomputer facilities (see Chemistry World, May 2018, p18), while others like Evonik and Dow have partnered with IBM to get access to its Watson supercomputer. Even then, the simulations they can run include significant approximations and generalisations, and cannot encompass the full quantum mechanical complexity of the problems.

There is still a long way to go before quantum computers will even begin to address these challenging problems. But the hope for the companies at the vanguard of quantum computing is that the expertise they develop along the way will put them a quantum leap ahead of the competition, once the technology matures.