A down-to-earth tale of fuel cells 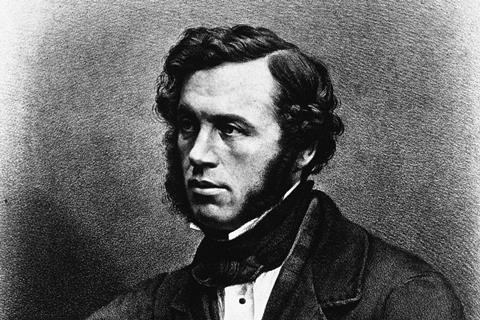 I have recently been gripped by a BBC podcast made by Andrew Luck-Baker and Kevin Fong called 13 Minutes to the Moon. The second series dissects the mission of Apollo 13, which nearly ended in catastrophe after a pressurised oxygen tank exploded. The three fuel cells, fed with hydrogen and oxygen, were instantly made useless. Not only was there no power to run the on-board computer and instruments, but the astronauts would be without water needed for drinking and to rehydrate their freeze-dried meals.

The podcast reminded me that, in spite of endless hype, there have been few truly successful examples of fuel cells since their discovery by Welshman William Grove in 1839.

Grove’s fascination with science began as a sideline to his training as a lawyer. Called to the bar at Lincoln’s Inn in London, his poor health prevented him from practising. The situation left him long hours of reading and tinkering on his own.

Ever since 1799, when Alessandro Volta reported that daisy-chaining alternating pieces of silver and copper in a series of wine glasses resulted in electrical activity, chemists across Europe have been carrying the science of electricity forward. William Nicholson discovered electrolysis. Humphry Davy used massive banks of plates – batteries – to split molten salts and to isolate wildly reactive metallic elements. His former assistant, Faraday, had gone on to quantify the relation between chemistry and electricity.

While the voltaic pile was very effective, it was fiddly and took up a lot of space. The problem of polarisation plagued work to find other ways to produce electricity from chemistry: yes, a current would begin to flow, but within a few minutes the voltages would drop and the current would dwindle to nothing. One of the first people to solve this problem was John Daniell at King’s College London, who developed a constant battery by combining copper and zinc electrodes into solutions of the respective sulfates, separated by a porous barrier that kept the two solutions apart.

Grove had, during this time, married the daughter of a Royal Institution (RI) member and travelled to France and Italy on what was both a honeymoon and an opportunity to experiment. He began to investigate Daniell’s battery, and found, to his surprise, that changing the electrolyte from sulfate to nitrate made a big difference to performance. In 1839, on his way back to Britain, he wrote a short note about this in The Philosophical Magazine and presented his improved battery at the Académie des Sciences in Paris. He later spoke at the British Association meeting of 1839 and was invited by Michael Faraday to give a Friday evening discourse at the RI. If it led to his election to the Royal Society, it also led to an unpleasant spat with Daniell who wrote, rather petulantly, that Grove’s battery was nothing more than his own with a bit of nitric acid thrown in. 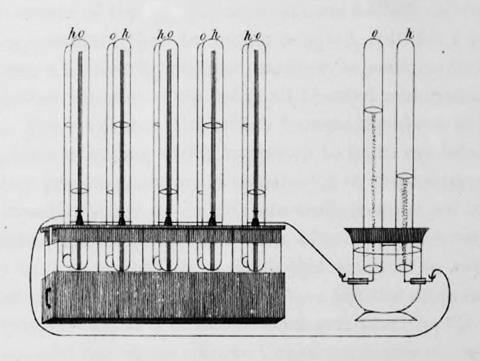 On of Grove’s experimental ’gas batteries’

Tucked at the end of Grove’s 1839 note was an utterly unexpected postscript. He described placing glass tubes partially filled, one with hydrogen, one with oxygen, in a tank of acid, with two platinum foil electrodes sitting in each tube. When a voltage was applied, hydrogen and oxygen streamed off the electrodes. But if the platinum foil was pushed up out of the liquid to make contact with the gas, a voltage appeared. The idea that a gas could replace a metal to generate electricity was mind-bending.

On the strength of his initial battery work, Grove was appointed professor at the London Institution, a now-forgotten rival to the RI. He now had time to think and experiment and he soon demonstrated that by daisy-chaining several of these ‘gas Voltaic batteries’ in series he could deliver a jolt felt by ‘five people holding hands’. In a particularly elegant experiment, five pairs of his gas cells could be used to deliver electrolysis in a sixth. Over the next few years he published a series of papers developing the idea, studying different pairs of gases and starting to generalize ideas about electrolysis. He also began to develop an idea that all the ‘forces’ must be linked in some way, giving a lecture in 1842 in which he formulated one of the earliest statements about the conservation of energy, predating Harmann von Helmholtz by five years. He would expand these ideas into a book On the Correlation of the Physical Forces that would run to several editions. Grove would become a leading science policy maker in Britain, instrumental in setting up a system of government funding for science. But his gas cell would lie dormant for decades. 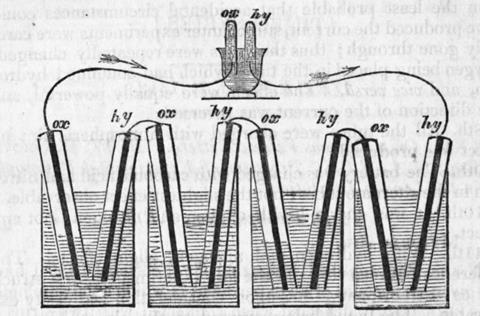 Despite many refinements since Grove’s time, fuel cells haven’t quite lived up to their potential

In 1890 Ludwig Mond resurrected Grove’s idea, improving on it and renaming it the ‘fuel cell’ and pointing out that its efficiency might outstrip that of a conventional heat engine. Even this was not enough to make the cells commercially viable. It was not until the engineer Francis Thomas Bacon began working on the problem in the 1930s that truly usable fuel cells began to emerge. Bacon’s fuel cells were a real tour de force using molten caustic soda as the electrolyte, porous nickel membranes and running at huge gas pressures. In the 1960s Nasa licensed Bacon’s patents and contracted Pratt & Whitney to develop the cells for the space programme, where they provided silent power and water for astronauts from Gemini onwards.

Even so, down on earth fuel cells still haven’t properly taken off. Could this be the decade when Grove’s vision finally turns into reality? After all, on Earth, you don’t need a fragile oxygen tank.