The making of a modern Prometheus

‘Chemistry is that branch of natural philosophy in which the greatest improvements have been and may be made; it is on that account that I have made it my peculiar study.’

The bicentenary of the publication of Mary Shelley’s classic Gothic novel Frankenstein has elicited a great deal of commentary. But there has been very little acknowledgement that her creation Victor Frankenstein’s fateful achievement was chemically inspired. At the start of the tale, his mentor – whose advice, says Frankenstein, ‘decided my future destiny’ – is revealed as Waldman, a professor of chemistry at Ingolstadt, who is quoted above.

As a student, Victor hears the professor deliver a ‘panegyric upon modern chemistry’ that seems to reflect Shelley’s own ambivalence about the power and peril of science:

‘The ancient teachers of this science promised impossibilities and performed nothing. The modern masters promise very little; they know that metals cannot be transmuted and that the elixir of life is a chimera. But these philosophers… have indeed performed miracles. They penetrate into the recesses of nature and show how she works in her hiding-places. They ascend into the heavens… They have acquired new and almost unlimited powers; they can command the thunders of heaven, mimic the earthquake, and even mock the invisible world with its own shadows.’

In this way, Waldman turns Frankenstein aside from his infatuation with alchemists such as Paracelsus and Agrippa and engages him with what chemistry is really about. That brings the student to the burning question: ‘Whence… did the principle of life proceed?’ And so begins the morbid fascination that leads Frankenstein to become ‘capable of bestowing animation upon lifeless matter.’ You know the rest.

Shelley gives few clues about what the secret of reanimation is, although she supplies hints that electricity is involved – mindful as she was of the experiments reported in 1791 by Luigi Galvani, in which he stimulated a frog’s dissected leg with electricity from a primitive Voltaic pile. More dramatic still were the experiments in 1803 by Galvani’s nephew Luigi Aldini, who restored a brief semblance of life into the corpse of a recently executed criminal (such experiments were banned in the following decade). 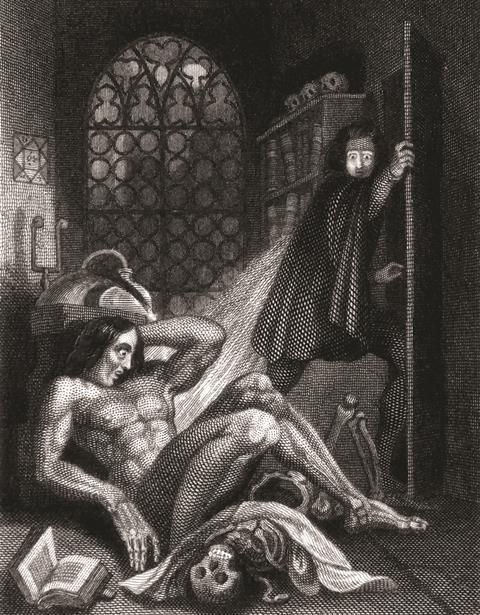 In the classic novel, Victor Frankenstein is inspired by his chemistry professor

At this point in Frankenstein chemistry seems to recede, and one might wonder why Shelley introduced the topic in the first place. But electricity and chemistry were already intimately entwined. There were the experiments on electrochemistry and electrolysis by Humphry Davy, an associate of Shelley’s father William Godwin, whose Elements of chemical philosophy she read in 1816. It was probably Davy’s book that taught Shelley the distinction – rather too emphatic by modern standards – between chemistry and alchemy.

By the early 19th century there was a growing sense that chemistry held the key to life, maybe through the sustaining agency of Lavoisier’s oxygen. Electricity was widely regarded as a kind of fluid much like any other, with vital powers. The 1830s saw excited debate about the experiments of English gentleman-scientist Andrew Crosse, who claimed to have synthesised insects and spiders from an electrified solution of salts and acids dripped over a mineral. Ada Lovelace, estranged daughter of Shelley’s friend Lord Byron, visited Crosse but was not impressed. Michael Faraday found himself obliged to deny reports that he had reproduced the work.

The teenage Shelley showed uncanny prescience by intimating that life was fundamentally a chemical affair. In the early part of the century, chemists such as Jacob Berzelius and Justus Liebig began to establish organic chemistry as the link between the living and the abiotic, and to erode the need for any ‘vital force’. Soon, even Charles Darwin was speculating about life’s chemical origins, while his ally Thomas Henry Huxley considered there to be a kind of universal living substance called protoplasm. In the early 20th century the focus of this nascent biochemistry came to be the issue of organization, not mere composition – but one could say that molecular biology never looked back.

And yet Shelley’s tale puts a Faustian stamp over the whole business, which chemistry has never quite dispelled. There are obvious parallels between Frankenstein and that later prototypical Gothic horror, Robert Louis Stevenson’s The strange case of Dr Jekyll and Mr Hyde (1886). Here again is the scientist – Jekyll is a physician – meddling with things he cannot understand or control. And here, again, chemistry is the culprit. Stevenson builds on the popular theory at the time that the hemispheres of the brain may be inhabited by separate personalities: one rational and moral, the other impulsive and decadent.

Stevenson has Jekyll release the bad from the restraining agency of the good with a drug apparently made from substances bought from wholesale chemists – the bubbling potion that became obligatory in every movie version since Rouben Mamoulian’s racy 1931 version. It’s a chemical potion, too, that bleaches the blood pigment of HG Wells’ antihero in The invisible man (1897) – and leaves him a homicidal maniac.

Chemistry was recognised as the art and science of transformation. But some transformations, as these authors implied, are best left alone.