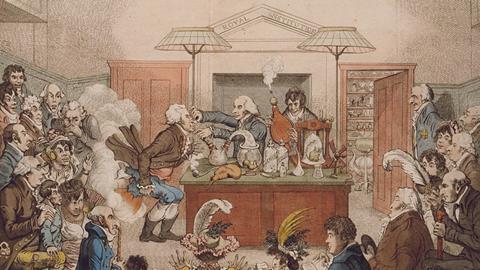 Source: Image courtesy of the Royal Society of Chemistry library

Humphry Davy may have been more than two centuries in advance of his time if recent ideas in fertiliser production come to fruition. He was certainly one of the most influential natural philosophers of the early 19th century. To the general public, Davy is probably best known for his miners’ safety lamp, that protected the flame with a metal gauze and prevented methane pockets from igniting. To chemists, he is perhaps best known for the first isolation of many of the alkali and alkaline earth elements, such as barium, calcium, potassium sodium, magnesium and strontium. This he did in the years 1807 and 1808 by electrolysing their salts with a Voltaic pile, a battery stack built with multiple alternating zinc and copper plates, a design that first became available in 1799. Yet it could be that his less-known work on the electrolysis of air will also have a big impact.

Davy’s experiments with air were reported in his 1807 article in the Transactions of the Royal Society.[1] He found that the prolonged electrolysis of pure water with a 200 plate Voltaic pile and gold electrodes gave what appeared to be some ammonia at the cathode, and ‘nitrous acid’ – presumably HNO2 or HNO3 – at the anode. 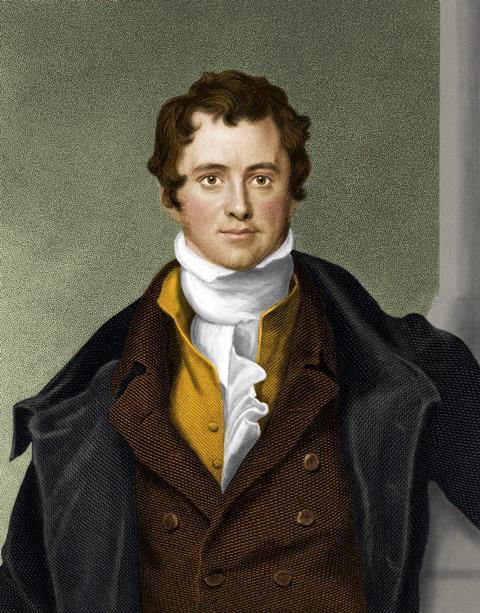 Davy considered that residual saline matter in the water might have been responsible, but alternatively that aerial nitrogen was the source. In modern terms, dissolved nitrogen might have been reduced to ammonia at the cathode and oxidation of some of that ammonia gave the nitric acid at the anode.

Fichter and Suter[2] repeated the experiments in 1922, and confirmed the result – at least to the extent of finding a small yield of ammonia on electrolysis of dilute sulfuric acid with platinum electrodes under 200 atmospheres of pressure in a nitrogen-rich environment.

Moving forward to the present,3 a number of workers have taken up the problem with modern methods and have found much more substantial Faradaic yields of ammonia (the efficiency of the electrochemical reaction). These vary from 0.5–78% with nickel, platinum or palladium electrodes at elevated temperatures and pressures.

If electrolysis should become a viable strategy for nitrogen fixation, it could be a way to circumvent the Haber and Ostwald processes and their big carbon footprint. The Haber process converts atmospheric nitrogen to ammonia and the Ostwald process further converts a part of the resulting ammonia to nitrate, resulting in the NH4NO3 that is widely used as a nitrogen fertiliser. Both processes are very energy intensive – the resulting CO2 emissions are estimated to account for around 3% of the global total. NH4NO3 also presents numerous hazards of transport, storage and even deliberate misuse.

The most recent suggestion[3] for applying electrolysis is that conventional silicon solar arrays on farms could capture sunlight, even in winter, and convert ambient air to a dilute NH4NO3 solution for direct application to the fields. Low Faradaic yields of NH4NO3 would be no bar to viability, because any hydrogen produced as a byproduct from the concomitant water electrolysis pathway could be routed to a fuel cell. This would both recover some of the energy lost in proton reduction and simultaneously partially deplete a stream of air of its oxygen, thus preparing it to be introduced into the electrolysis cell as a more suitable substrate stream than standard air.

Of course, there are challenges before such a green solution is implemented, both in terms of finding suitable electrocatalysts and setting up the array. But if these problems are resolved, Davy’s pioneering efforts could help bring us to a green economy – adding further laurels to the memory to one of science’s most recognisable names.