Is the pressure to publish making chemists cut corners?

The great Justus von Liebig once said: ‘The foundation of all chemical works is tireless patience and persistence without limits.’ Such a statement was not unusual for a 19th century chemist. History seems to be overflowing with scientists who had Liebig’s ‘patience without limits’. Organic syntheses were designed using trial and error. The rare earth elements were discovered after thousands of repeated crystallisations and gravimetric analyses that are reflected in their names: lanthanum (lanthanein; to lie hidden), dysprosium (dysprositos; hard to get at) and so on. Jöns Jacob Berzelius determined the atomic weights of all known elements by making careful analyses for over two decades. Time seems to have meant nothing to the chemists of the 19th and early 20th centuries. For them it was important to say, as Dmitri Mendeleev once did, ‘this is my monument’. Mendeleev’s great monument – his legacy – includes the periodic table, theories on solutions and the elasticity of gases, and his general chemistry textbook. 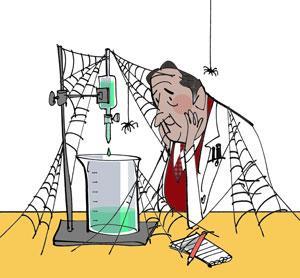 The situation is quite different nowadays, when a typical chemist might say: ‘I published x papers that were cited x times.’ Few seem bothered about publishing results that will be their ‘monument’. Instead, they race to publish as many papers as possible. Today’s chemist doesn’t have the patience to spend years trying to get the results that really matter. They only want to write a manuscript that passes the review process of one of hundreds of journals. If the manuscript is rejected by one journal, they send it to another. Why not? Someone will eventually swallow the results. Impatient chemistry is, unfortunately, the mark of our times.

As a theoretical chemist I am faced with this impatience virtually every day. Not because I myself am forced to ‘publish or perish’, but because I use published data to calibrate my models for the prediction of stability constants of coordination compounds. One surprising thing I have learned is that the constants measured by the late Fred Basolo in the mid 20th century are much better than the constants determined in this century. In those days everything was made manually; there were no automated burettes, and balances were not dissimilar to the contraption used by Lavoisier. Stability constants were estimated from hand-drawn plots and diagrams, not by sophisticated computer programs – and yet these constants are frequently better than those determined a few years ago. Why?

Because back then, chemists were patient. They were eager to find any possible systematic error in their experiments. They paid attention to the calibration of their glassware, and were masters of laboratory work. Berzelius purified his own chemicals and made all the glassware for his experiments, and as recently as three decades ago chemists at my institute designed their own instruments.

It is impossible to turn back the wheel of history. After the appearance of sophisticated and automated apparatus, it would be absurd to reintroduce manual work to the laboratory. But I’d like to think we can keep this kind of expertise alive somehow. What we really need are careful laboratory workers who have to manipulate chemicals, vials and flasks, not just design experiments and process the data from automated instruments. Perhaps we should introduce an undergraduate specialisation in experimental chemistry. The ‘master of chemical experimentation’ would be a real artisan, a person able to perform any experimental task, especially in analytical chemistry, to its utmost perfection. And, of course, they would have patience without limits.