Noteworthy unions between science and music

At the start of this year’s Graphene Week conference, I joined the crowd inside Manchester’s beautiful town hall to listen to the usual welcome speeches. Before spending the week learning about the various areas of research that had been inspired by the material, we were invited to take in the results of a different kind of inspiration: a musical performance based on graphene.

To mark the occasion, the National Graphene Institute’s composer-in-residence Sarah Lowes had spent the last few months composing the Graphene Suite, a process which she explained helped her appreciate the similarities between music and research. As I listened to the short preview I tried to watch out for graphene-inspired parts of the performance. Some were obvious: six was a running theme, given graphene’s hexagonal arrangement – with a total of six movements to the composition and several six-time sections even the most rhythmically challenged could spot. Others were more subtle – the portion I heard had an almost mournful quality, maybe to reflect the weight of expectations being placed on the material. 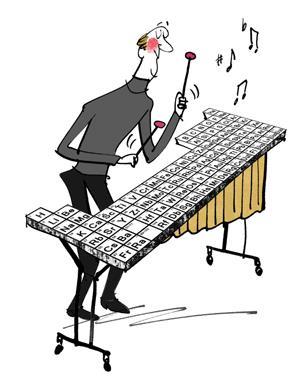 Although I am neither a graphene expert nor a musical genius, the experience did get me thinking about other instances where composers have been inspired by concepts in science.

One example that immediately springs to mind is The Planets by Gustav Holst, parts of which are just about as toe-tappingly catchy as classical music gets. Admittedly, each planet’s piece is influenced as much by mythology as astronomy, with inspiration taken from the Greco-Roman gods from which they take their names (Mars, god of war, Uranus the magician and so on). Nevertheless, the tunes are universally recognised. As for the natural world, it would take pages to list and describe all the examples of biological or geological phenomena inspiring and influencing musicians.

So what about chemistry? I could hardly go without mentioning Tom Lehrer’s The Elements at this point – chances are you’ve tried to sing it from memory at some point (which gets harder after a few drinks). It’s a catchy song, though it tells you woefully little about the elements except their names. Lehrer clearly wasn’t a chemist (he may have at least tried to put them in order!) Some notable musicians were, though. I wonder if Edward Elgar’s compositions were ever inspired by his activities as an amateur chemist. If they were, he never said so.

Perhaps Elgar missed an opportunity. There have been many artistic representations of the periodic table – the Royal Society of Chemistry’s Visual Elements Periodic Table, for example, uses symbolic images to represent each element. What if there was a sound version, which depicted the elements with uniquely meaningful music? I can imagine loud, energetic outbursts for reactive group I or II elements, for example, that take me back to the explosive demos of the school lab. Or perhaps elements’ special significance as essential for life, the planet or any other contribution to society could be reflected. Of course it could be taken very literally – perhaps the most fleeting of sounds for the short-lived species, or even some heavy metal for the heavy metals. And why stop there? Beyond the periodic table there are plenty of other compounds that could be given the graphene treatment.

For a creatively minded chemist the possibilities are almost endless. I’m keeping my eyes – and ears – open.