Lab of the living dead

When it comes to former work colleagues, what is dead may never die

In one of my former labs, when people moved on to new haunts we’d say (quite morbidly) that they had died. ‘Oh, Charlie would have been able to help you with your stubborn cyclisation – pity he’s dead,’ was a typical example, or ‘looking forward to your funeral!’ as a greeting to a graduating friend, one time enthused breezily as a horrified professor passed by. As students with little direct experience of the careers we hoped for ourselves, we sometimes wondered whether our passed comrades were ‘in a better place’. 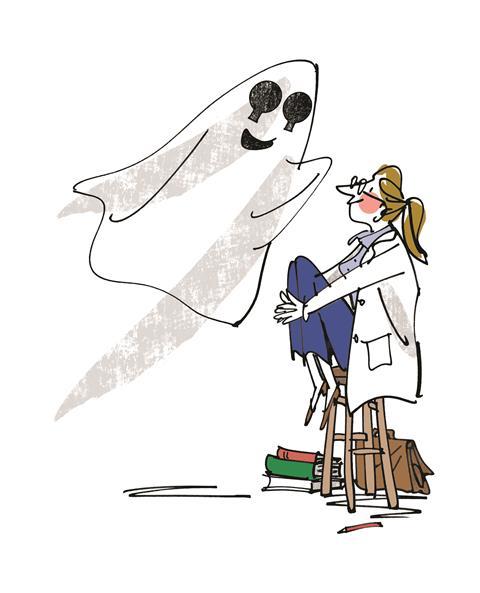 Yet in some ways departed colleagues never leave. Mementoes of them remain around the lab: a chemistry meme they printed out; an angry scribbled warning in an instrument logbook; their name blackened onto several cork rings to deter theft. Once, when I moved to a new desk, I found a frisbee, a dried-out HPLC column, a children’s colouring book (complete with crayons), six pairs of goggles, some 12-year-old chewing gum and a tray of long-rotten Chinese food that rapidly found secondary containment in the bin.

And it turns out there is life after death: who hasn’t encountered someone who’s asked ‘is that where you work? Hey, do you know my old labmate/housemate/mentor/rival?’ Half of the time you haven’t met this mutual connection, as they left before you started – but you’ve heard so many tales you feel as if you know them. These are stories passed down in group lore, some of them for decades. Imagine my joy when I got to tell a professor who had once worked for my supervisor that I’d seen a photo of him in drag, or my relief when the same professor regaled me with the story of how his labmate lost his eyebrows after washing a large quantity of potassium hydride – just after I had completed the same procedure.

‘If the boss ever suggests you work on a project involving a certain transition metal, say no at all costs. It’s killed three postdocs and it will go on to kill again.’

Tales of lost comrades are beyond value for choosing one’s own path within a group, with cautionary tales more prized than success stories. The dearly departed provide a textbook of what should never be done – and what you can get away with. Often, gossip is the only way to obtain insight to arcane academic practices enacted behind closed doors, including the dreaded viva or defence. Above all, the daring dead can provide instruction on delicate matters such as the diplomatic tactics required to persuade your supervisor to end a project. ‘If the boss ever suggests you work on a project involving a certain transition metal, say no at all costs,’ I was once warned. ‘It’s killed three postdocs and it will go on to kill again.’

There are lighter moments, too. Chemistry is full of oddballs, and dramatic stories only become embellished with time. One such character, his tale passed down to me by former co-workers, was Georgie. Infinite stories abounded about this eccentric student, a man who loved large amounts of free food and seemed happily unaware of social niceties. His life seemed to be made of escapades straight from the pen of Lemony Snicket.

Years on, while at a US conference, I stumbled upon a familiar face. ‘Oh,’ I began, ‘you must be Georgie. I worked in your PhD group, a year or two after you.’ I blustered that I was familiar with him because of his papers, not the enduring capers his friends had shared. Yet Georgie’s demeanour was uncharacteristic of the larger-than-life legend I had imagined. He maintained a serious expression and we moved on to discuss a recent review. They say never to meet your heroes, but lab legends will also brutally shatter your mental image when you meet them. They’re… normal.

Well, as normal as chemists get. Let’s be real: we are a proudly odd bunch. And, whatever their personality type, mutual connections make for a great source of career opportunities and recommendations (and further gossip). As my newfound academic sibling, Georgie happily provided me with insider information on several groups I was interested in hearing about. Chemistry is such a small world; perhaps we shouldn’t kill off our former colleagues just yet.