It belongs to the people 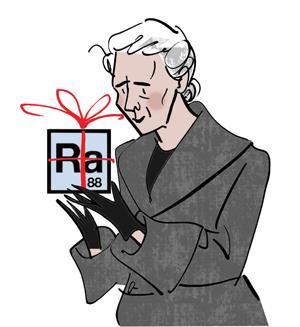 Marie Curie is one of the most extraordinary characters from the history of science. As a woman, she faced idiotic prejudices at every turn but always battled on. She fought her way to be the first female professor at the University of Paris; she was the first woman to win a Nobel prize and the only person ever to win two Nobel prizes in different sciences. How extraordinary then, that by 1921, Marie was left unable to afford even a single gram of an element she had discovered and named.

Radium had been painstakingly isolated in 1902 from over a ton of pitchblende. Marie and her husband Pierre had put themselves, albeit unwittingly, in harm’s way to isolate it; even today their papers are still too radioactive to be handled safely.

With its faint green glow, radium was an object of fascination. As Marie and Pierre had shared not only their discovery but their method, there was a radium boom. Radium became an element of miracles. Radium tonics would restore your hair (ironically, ingesting radium can cause hair loss); radium in your toothpaste would whiten your teeth (it wouldn’t) and radium tablets to increase your sexual vigour could be followed by radium contraceptives. In the years following the discovery, people around the world were eating, drinking and even wearing radium. It is lucky for many that a lot of these products were snake oil, the vendors lacking the skill, money or determination to isolate radium.

There were true applications of radium, however, and by the 1920s radiotherapy was taking its first tentative steps. The Curies could have made a fortune. If a single patent had been taken out, the process would have been theirs to sell, but this wasn’t the Curie way. They had unleashed radium onto the world and it was for the world to play, test and explore this new toy like a curious child.

The radium phenomenon had changed the world, but the style of Marie’s life had changed very little until a chance question during an interview with the leading US journalist Marie Mattingly Meloney: ‘If you had the whole world to choose from, what would you take?’ Her dream sounded simple: ‘I need a gram of radium to continue my researches, but I cannot buy it. Radium is too dear for me.’ In the years since its isolation, the price of a single gram of radium had risen to $100,000. Marie had been left unable to carry on her work, incapable of purchasing the smallest amount of her element.

But the American public warmed to Marie – for her dedication to science; her quest for knowledge and her unstoppable resolve in the face of sexism. Soon a national campaign was underway. Before too long the money was found and Marie was on a boat to America. Crowds of people flocked to see her and show their admiration. She was taken on a whirlwind tour of the US and soon found herself at the White House being presented with a small golden key by the president. The key unlocked a lead-lined cabinet containing a single gram of her precious material.

Marie might not have made her fortune, but she became a pioneer in the openness of science. She never regretted sharing her discoveries with the world. ‘Radium was not to enrich anyone,’ she told Meloney. ‘Radium is an element, it belongs to the people.’