No princes were needed on the quest for structure factors

When most of us think of fairy tales we think of cute characters struggling against evil only to be saved by the miraculous intervention of a strong-jawed ‘prince’ or mysterious half-relation. But as the literary critic and fabulist Marina Warner points out, in their original form, fairy tales, are always darker, scarier, and less comfortable than we think. 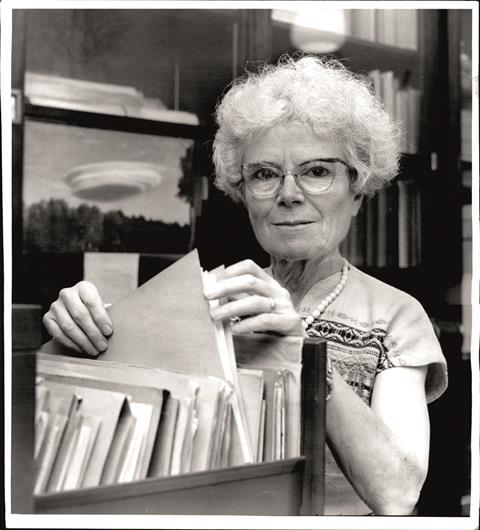 The story of Kathleen Lonsdale is one that at first sight might lend itself to the fairy tale treatment. Born in Ireland, Kathleen Yardley was the last of ten siblings, four of whom died in childhood. Her father was erratic and something of an alcoholic. When Yardley was five, her mother left him and moved the family to Essex, England. Tiny, but bright as a button, Yardley had a sponge-like mind for facts, as well as a ferocious work ethic. She got a scholarship to the local girls’ grammar school, but the school’s limited curriculum meant she had to take classes in science and maths at the neighbouring boys’ school.

At the age of 16, the mathematician Harold Hilton accepted Yardley to study science at Bedford College for Women (part of the University of London). She later switched to physics, graduating with the highest marks of any student for 10 years. Her spectacular performance caught the eye of one of the examiners, William Henry Bragg, who offered her a studentship.

Bragg was not, by all accounts, a ‘hands on’ supervisor. William Astbury, a member of the group at the time, recalled that Bragg ‘never “led” any of us, in the technical sense … as often as not when he popped into your room (not terribly often) it was to ask you a question in connection with some lecture that he was due to give.’ Bragg simply told Yardley to get on with assembling her own X-ray apparatus, including one of the new Coolidge tubes, a gas ionisation detector with a gold leaf electroscope; he also suggested that she read Hilton’s book of mathematical crystallography.

Bragg was not, by all accounts, a ‘hands on’ supervisor. William Astbury, a member of the group at the time, recalled that Bragg ‘never “led” any of us, in the technical sense … as often as not when he popped into your room (not terribly often) it was to ask you a question in connection with some lecture that he was due to give.’ Bragg simply told Yardley to get on with assembling her own X-ray apparatus, including one of the new Coolidge tubes (Chemistry World, February 2013, p62), a gas ionisation detector with a gold leaf electroscope; he also suggested that she read Hilton’s book of mathematical crystallography.

Hilton had written the book in 1903, well before Max von Laue’s first X-ray experiments. He systematically built up the possible internal symmetries of crystals, deriving the basis of the 230 space groups. Enthralled by the book (it would be a treasured possession), Yardley worked with Astbury to connect these symmetries with observed diffraction patterns. Unbeknown to them, tables of space groups had already been derived independently by Paul Niggli and Ralph Wyckoff. But Yardley and Astbury’s work was subtly different, deriving a diagrammatic way of representing the space groups that made it obvious how molecules within a unit cell relate to each other.

Bragg moved his group to the Royal Institution in 1923, and in the following year, somewhat reluctantly, presented Yardley and Astbury’s paper to the Royal Society. His instinct was wrong – their paper would become one of the most cited and reprinted papers in Philosophical Transactions because of its practical approach. It would form the basis of the International Tables of Crystallography for which Yardley calculated the tables of structure factors for every space group. The facsimile of her handwritten notebook is a thing of rigour and beauty. If there isn’t a modern version sitting in your local X-ray lab, then the formulas are subsumed in the instruments’ software. 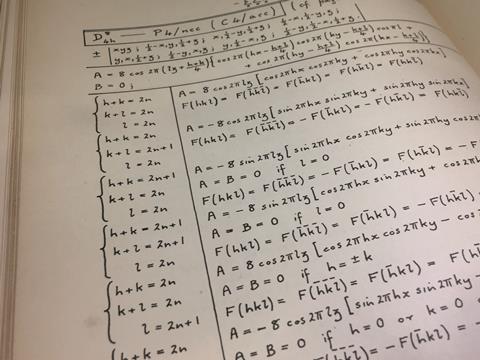 Yardley also succeeded in building her ‘spectrometer’ and used it to solve the structure of succinic acid as part of her MSc, completed in 1924. Measurements involved spending hours watching microscopic movements of the gold leaf as the crystal was rotated to different positions. Only later would she realise that the structure was entirely wrong, leading her to ask herself whether she should return an undeserved degree…

In 1927 Yardley married her boyfriend, Thomas Lonsdale, an engineering student who had won her heart in part by teaching her to use a soldering iron as she built her kit. When he got a job in Leeds she moved with him and was given a part time position in the physics department. With a grant from the Royal Society she set out to determine the structure of crystals of hexamethylbenzene that Christopher Ingold, then professor of chemistry at Leeds, had offered her. This structure was of enormous significance, proving that the benzene ring was planar and hexagonal.

Kathleen Lonsdale was the first to use Fourier methods when she solved hexachlorobenzene in 1931. The work was brutally time-consuming, as all the calculations were done using pencil, paper and a lot of mental arithmetic. Bragg arranged a grant to pay for help with housekeeping and looking after the young couple’s baby, a gesture that was hugely appreciated. The same year, Bragg invited Lonsdale back to the Royal Institution where, in 1945, she would become one of the first two female Fellows of the Royal Society.

Was her life a fairy tale? Bragg may have helped her, but she succeeded by sheer force of personality, brilliance and hard work. In the real world, there is no prince, and no fairies. It is people like Kathleen Lonsdale who let in the light.