For once, the right man gets the credit 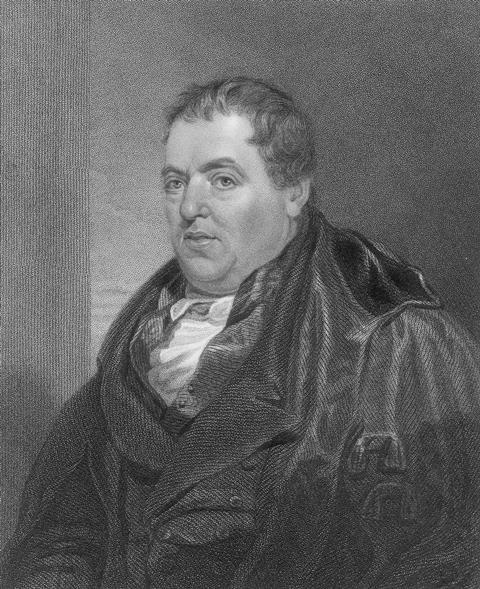 Source: © Engraving by H. Cook after a painting by A. Chisholm. (Photo by Hulton Archive/Getty Images)

Scottish physicist whose cubes demonstrate the intricacies of radiant heat

A recent BBC Radio 4 series addressed ‘Laws that aren’t Laws’, amusing rules of thumb that, like the Ig Nobel prizes, make you laugh and then think. Stigler’s Law, for example, states that every named law was actually dreamed up by someone else. Veteran readers of this column may have spotted a similar pattern for apparatus. Abderhalden’s drying pistol was invented by Ludwig Storch, Liebig’s condenser goes back to Christian von Weigel and Johan Gadolin, while the Perkin triangle was first made by the forgotten Leonard Thorne. But as with all ‘laws’, exceptions are always interesting, John Leslie really did invent the Leslie canister or cube. He also established a rule that bears another name: Ohm’s Law.

Leslie was the son of a cabinet-maker, who helped to teach him enough mathematics that he was able to go to the University of St Andrews at the age of 13 with the financial support of Lord Kinnoul, the chancellor. Although formally studying divinity, he mostly attended lessons in science and mathematics. After graduating he had a tough few years, eking out a living as a tutor and trying to find an academic post – a serious challenge for an atheist in clerical Scotland. Eventually he became a tutor to Josiah Wedgwood’s son, Thomas, where he had access to a fine library and could do his own experiments. It was here that he showed the relationship between voltage and current that would later be called Ohm’s law (though he did not publish his findings until 1824); he also showed that electrical resistance depended on the nature, area and length of the conductor. The Wedgwoods would give Leslie an annuity of £150 that secured his financial independence for a time.

In 1801 Leslie was galvanised by Herschel’s observation of invisible radiation just beyond the red end of the visible spectrum. This radiant heat was utterly mysterious and Leslie spent several happy months doing experiments. The results would be published in 1804, in a book sometimes referred to as Leslie on Heat. It laid the foundation for understanding infrared radiation for the rest of the century. Leslie dedicated the book to Thomas Wedgwood, whom he described as ‘my best friend’. The first half of the book remains delightfully readable and opens with a description of the three crucial devices he used in his experiment. It is worth following chapter 1 step by step.

Leslie first commissioned a set of parabolic and elliptical specula, tinned iron reflectors which, he commented, ‘cost me no small trouble to obtain what I wanted. I had to make repeated trials before I could find an artist skillful enough to execute the reflectors with tolerable precision.’ To guide the maker, Leslie made shaped strips of mahogany to use as gauges. The resulting highly polished metal shells, around 1 foot in diameter, could ignite pieces of wood in seconds by focusing the sun’s rays.

As heat sources, Leslie commissioned hollow cubical tanks (‘canisters’) made of planished and polished tin in multiple sizes, and fitted with a thermometer. The cubes sat on wooden stands at the same height as the centre of the specula. One face of each cube was polished to a high shine, the second was coated with lampblack/soot, onto the third was glued a sheet of paper, while the fourth could be painted or coated with other materials. By rotating the stand any face could be oriented at a specific angle, or a different face presented to the reflector.

The final component was a differential thermometer. Leslie joined two glass bulbs with a U-shaped wide-bore capillary tube filled with sulfuric acid coloured with cochineal, the insect-derived red dye. One bulb (the ‘focal ball’), coated with lampblack, was placed at the focus of the reflector. The heat from hot water poured into the canister caused the column of acid in the capillary to move as the warmer air in the black bulb expanded. 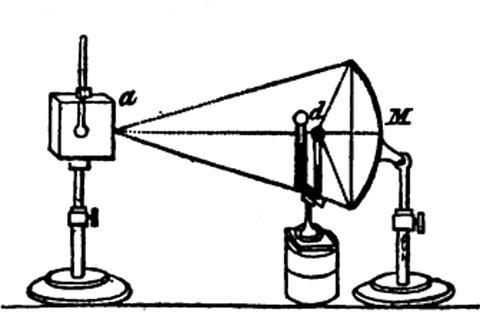 Leslie’s apparatus, containing three crucial pieces of equipment: a cubical tank, a differential thermometer and a speculum (left to right)

The apparatus was calibrated by adding water at different temperatures and observing the movement of the capillary. Leslie demonstrated that different faces of the canister radiated very differently (the word emissivity was decades in the future) and had equivalent powers of absorption. He found that screens of paper, tin foil or glass had different opacities; by submerging the entire apparatus in a tub of water he showed that water too was opaque. He also showed that the intensity of the radiation depended on the distance of the source to the reflector, and on the sine of the angle made by the cube’s face to the reflector – observations fundamental to our understanding of solar radiation balance. He added that ‘the velocity of transmission too must be prodigiously great, for though with a pair of bellows I blow strongly along the surface of the canister, I produce no sensible alteration in the focus of the reflector’. If you laugh now, you only do so thanks to Leslie’s care to leave no stone unturned.

In 1805 Leslie was elected Professor of Mathematics at Edinburgh amid a storm arising from his embrace of the philosopher David Hume’s scepticism of correlation and causation, as well as his atheism. Leslie would later become professor of natural philosophy, giving lectures peppered with demonstrations. As he grew older, fatter, more pompous and vain, he dyed his hair purple and became something of a figure of fun. His cubes, however, live on and remain a core part of the school science practical curriculum.

Musing on Leslie’s life, I wonder whether teachers today ever have the time to ask their students what a law is, and when a law is not actually a law at all.

J Leslie, An Experimental Inquiry Into the Nature and Propagation of Heat, London, 1804