What price a library?

I was surprised to notice that the cost breakdown of a chemistry department (Chemistry World, October 2016, p69) did not include the overhead cost related to the library.

I do not know what a university subscription to all the Royal Society of Chemistry’s (RSC) journals costs, but I would imagine that once you add the RSC, American Chemical Society, Elsevier, Wiley, Springer and Taylor & Francis journal costs (let alone books), it must be an operating expense that would show up.

Unless I have it wrong, one of the sizeable operating costs of having a chemistry department is having a chemistry section in the library. For me, the library staff and resources are often the unsung heroes that enable my research. To put it into perspective: I can imagine doing research without an NMR, as painful as it sounds, but I cannot imagine doing research without books and journals.

Editor: The article focused on direct costs, and you would hope that a university’s library would have access to some of these publishers even without a chemistry department. We could have also included administration costs, maintenance costs, catering costs, accommodation… 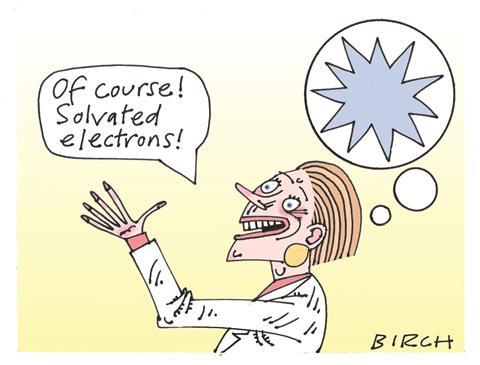 Reading the article on tamed sodium (Chemistry World, October 2016, p47), I was reminded of work I carried out some years ago concerning the methods of determining low levels of extracted sulfur.

To establish the viability of the method, sulfur was dissolved in acetone at around 5ppm, and then oxidised to sulfate using a small excess of hydrogen peroxide. This resulted in the oxidation taking place in a solution containing less than 1% water. An intense blue flash occurred, easily visible and lasting a few seconds, when the hydrogen peroxide solution was added. As all reagents were of the highest purity commercially available and checks for contaminating elements came up negative, we were at the time unable to explain the phenomenon.

If this was in fact due to solvated electrons, their half-life extended by the use of dilute solutions and a largely non-aqueous medium, it may be possible to obtain the same transient electron species with many other redox systems, particularly those which involve electron transfer from or to elemental species.

I agree wholeheartedly with Philip Ball’s comments on the faults of how we measure scientific literature – whether impact factors or the number of citations (Chemistry World, November 2016, p48).

Related to this are factors outside the control of journals. These include the release of certain – often tentative – conclusions via websites prior to journal or even communication publication as a way of whetting the appetite of the science community or even the public. Such selective results and conclusions can be picked up by the media and can make the headlines. When the papers finally appear after peer review – if accepted at all – the more spectacular claims are either not present or have been modified significantly. If this were the patent process, it could be understandable. But have we made the impact factor drive so important that we must rush the smallest nugget into print? The net effect is to bring the whole of science into disrepute.

Ben Goldacre’s book I think you’ll find its a bit more complicated than that gives many examples of cases in which academic press releases are published verbatim by science journalists, who state that it is not their job to verify whether the claims are true but merely to report the news. University press officers may wish to bask in the glory of their scientists appearing on local or even national news with some key finding, but we should beware these claims if they are not yet proven through the peer review process.

We will all recall having some exciting results and running to a supervisor, only to be told some two weeks later ‘Do it again: is it repeatable?’ More often than not it isn’t. Today people will post the news on social media and, if the work is in an area that is in any way controversial, there are hundreds of journalists waiting for a story. The need for peer review has never been greater, but outside of the scientific establishment the term ‘peer review’ means little. Trial by Twitter is not the answer, nor is judgement by discussion forum. A new assessment of the importance and quality of research is needed. 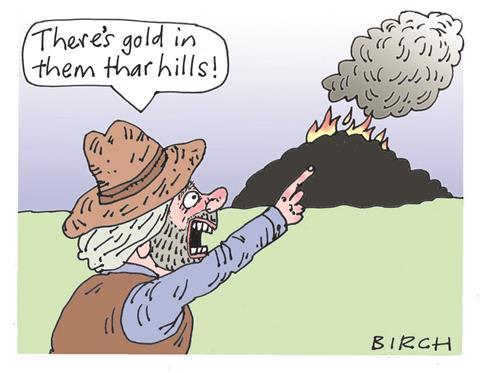 in which he refers to the spontaneous combustion of coal. As a former power station chemist, I remember in the early 70s the UK’s Central Electricity Generating Board built up a large stockpile of coal around the country’s power stations as a strategic reserve, in heaps exceeding 1 million tonnes, to mitigate the effects of industrial action in the coalfields. These heaps were mechanically compacted, contoured and sprayed with bitumen to prevent water erosion and the ingress of air into the heap, which could result in stack fires.

My understanding of the mechanism of the combustion process is that iron pyrites (ferrous sulfide) present in the coal was pyrophoric, undergoing exothermic oxidation, if exposed to air. Most deep mined coal contains a varying amount of ‘dross’, which cannot be economically separated from the coal substance by mechanical separation. In this, crystals of iron pyrites are often found as small, gold-coloured, interlinking cubic ‘nuggets’ of fool’s gold. Pyrites will spontaneously ignite in the presence of oxygen and set fire to the surrounding coal, which acts as an insulator, thus accelerating the combustion process by increasing the temperature.

I recall that, prior to privatisation of the electrical power industry, the coal supplied to the power stations by the National Coal Board in the Midlands contained an average of 1.6% sulfur, with approximately 0.6% of that sulfur chemically bonded into the coal substance, and much of the remainder occurring as iron sulfide.

During storage, coal slowly degrades, due to the release of methane and other hydrocarbons, resulting in a reduction of its calorific value. It was particularly important when drilling holes into the storage heap for coal samples, or the determination of the coal stack density using a radioactive source, to ensure that the holes were immediately backfilled and compacted to exclude air.

It all adds up

I was surprised by Kit Chapman’s statistic that only six of 52 universities offering undergraduate chemistry courses required A-level maths as an entry requirement (Chemistry World, November 2016, p60). My Royal Institute of Chemistry course in the 1960s could not have been understood without a good grounding in maths. Physical chemistry, in particular, would have been a complete no-go area. One has only to go back to text books of that time to see how impossible it would have been to understand the subject without a proficiency in calculus.

On taking early retirement I obtained a teaching qualification and spent several years teaching part-time at a local university. There, I found that science students didn’t have a sufficient mathematical grounding and I was forced to explain subjects such as acid-base theory, thermodynamics and reaction kinetics using non-quantitative concepts. Indeed, I found that my own classical teaching had sometimes obscured the underlying concepts under a cloak of equations. The fact that I knew the equations didn’t always mean that I understood the reality; it was quite refreshing to see my subject from a different perspective.

However, I am certain that a competent professional chemist needs to have a good grasp of mathematics. Yes, we must ensure that entry requirements do not exclude enthusiastic students, but when a chemistry degree is awarded it must have credibility.