Despite being retired for some 11 years, my interest in practical chemistry has not reduced. So it was that when it was necessary for my wife to purchase a steam iron recently, I decided to fabricate a water softener in order to prolong the item’s life. 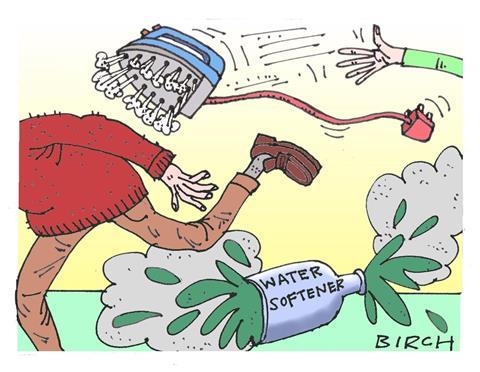 Having started my career in chemistry as a lab assistant at a power station in London, I have a fairly good idea of how water softening and demineralisation by the use of ion exchange resins works. It so happened that I was in the possession of a kilo or so of commercially available resin, mostly exhausted (but some unused) from the inbuilt softener of a previous steam iron.

I fabricated a resin column out of an upside down, two litre bottle with a water inlet connection to its base (now the top). The resin was retained with a filter in the neck and the flow ‘regulated’ by a simple push-valve, as found in many drinks.

The presumption was that the resin was of the cationic variety and that I could simply reactivate it by the application of a strong brine regenerant. I had thought to do this in situ, but for simplicity I decided to carry out the operation in a large plastic jug. This may have avoided me having to write this in a hospital bed, for, on pouring my brine solution (5% w/w dishwasher salt) on to the resin there was almost an explosive evolution of gas, the like of which I had not seen since I blew up a five gallon home-beer fermentation vessel some 45 years ago!

I can find no reference to this gas evolution problem occurring in industry – and, despite the odd gurgling noise, as far as I know it doesn’t happen in our dishwasher. The only thing that I can think of is that, while it was stored in my shed, the resin had physically adsorbed a gas from the atmosphere which had been displaced on addition of the brine solution.

I hate not knowing, so I would be very glad if someone could enlighten me on the cause of this phenomenon.

Sarah Houlton’s fascinating piece on DIY chemistry (Chemistry World, December 2016, p21) brought back many memories of experiments carried out in my bedroom, my long-suffering parents’ kitchen and – where potentially hazardous reactions were involved – the garden.

My first introduction to home chemistry was a book called Chemistry magic by Kenneth Swezey. Published in the US, it described fascinating experiments involving exotic substances which could not, alas, be purchased in the UK (at least not by a schoolboy). The local pharmacist would grudgingly supply copper sulfate but that was about all. Some chemistry sets had surprisingly interesting chemicals which were purchasable as refills, but my home experiments didn’t take off until I discovered a supplier in the East End of London that stocked a full range of chemicals. The firm was happy to supply almost any substance not subject to the Pharmacy and Poisons Act 1933 – quite a few of which are now banned or only available with a licence. Other boys at school sometimes passed on chemicals no longer needed, such as white and red phosphorus and even a jar of arsenic trioxide (which our chemistry teacher, promptly confiscated).

The world has moved on from the comparatively innocent days of the 1960s. Some of the purchases made and reactions carried out then could now lead to an uncomfortable interview with the security services. It is only right that access to powerful oxidisers and other chemicals which could be used in explosives manufacture are restricted. Let us hope that there are still enough chemicals available for those with the curiosity, enthusiasm and (preferably) a shed to explore this most exciting of sciences.
Brian Price CChem MRSC
Weston-Super-Mare, UK

Your article on superheavy elements (Chemistry World, January 2017, p22) suggested that the relativistic effects on oganesson could spell the end of the periodic table. Periodicity is, however, already under strain at the beginning of the inner transition series, where the chemistries of protactinium, uranium, neptunium and plutonium differ significantly from those of praseodymium, neodymium, promethium and samarium.
Peter Nelson MRSC
Hull, UK

Thank you for the interesting summary of recent thoughts on the Mpemba effect (Chemistry World Jan 2017, p49). In 2013 a BTEC student of mine, Daniel Mathias, studied whether the effect occurred in stearic acid, which has a convenient melting point about 69°C. Indeed it does! He timed samples as they cooled and found that while some cooler samples took 12 seconds to solidify, warmer samples could take as little as nine seconds – he took almost 200 measurements to pin down maxima and minima on his time/temperature plots.

We tried to find a suitable place to publish his findings, hopeful that they would inspire other students to investigate the effect now it can be studied outside the confines of a freezer, but unfortunately I was unable to make any progress.
Ewen McLaughlin
Swansea, UK

Editor: Let us know if you try to identify the Mpemba effect with any other substance.