Your thoughts on absurdism, SI measures and Brexit

I object to the ideas in Adam Brownsell’s comment on absurdism (Chemistry World, October 2017, p1). The idea that we all search for meaning but can’t find it makes a huge assumption – that no one has ever found meaning in life. Well, lots of people have through faith. So absurdism is off to a bad start. 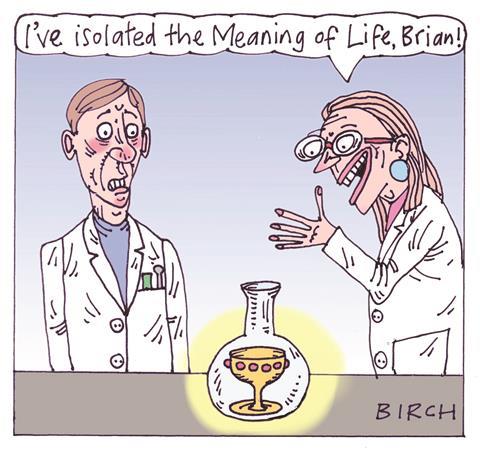 Absurdism’s founder Albert Camus’ position (that once aware of absurdity one has three options: suicide, faith or acceptance) again starts with a significant presumption, namely that there is no God. If there is a God, then of course we are all going to have a God-shaped hole in our lives, an insatiable longing for meaning. That is not absurd – it is logical.

Brownsell is right to say that going from ‘freedom to construct meaning for ourselves’ to ‘science’ is crude. While some people have indeed made this connection, others use that same freedom to say their nation, race, ideology or political views are paramount and absolute, and everyone else had better get used to it.

If I may take a turn at generating some objections, it seems a pity that people choose to cheerfully accept the melancholy idea, that, to quote Mahatma Gandhi, ‘whatever you do is insignificant, but it is very important you do it’, when it is so obviously contradictory and therefore untrue. Personally, while my motives are not always entirely altruistic, the reason I get out of bed is to build a fair, just and equitable energy system that allows people to enjoy their lives to the full without harming others.

The definition of units with respect to fixed numerical values of ‘fundamental’ constants allows their realisation across a range of magnitudes of the unit’s scale with equal uncertainty, and not just with an uncertainty optimised for a specific artefact (such as silicon-28, as he proposes) but with much larger uncertainties as one moves away from this fixed point on the mass scale.

Fixing the Planck constant in the revised SI also has great benefits for electrical and magnetic measurements. As for fundamental constants varying over time and space, there is to date no compelling evidence of such a phenomenon, let alone over the time and length scales which would have any relevance for practical measurements.

Mark Peplow suggests that the UK leaving Euratom at Brexit would be detrimental as the country would have to set up new regulatory systems (Chemistry World, September 2017, p14). I imagine we would. However, I hope those involved with marketing new chemicals in the EU can see no real reason for developing a different system post-Brexit. The recent House of Commons agreement surely allowed for a smooth transposition except where the UK definitely wants changes.

It would be helpful if the Royal Society of Chemistry invited comment from the UK chemical industry: could they not simply continue to send their dossiers of technical details to the European Chemicals Agency offices to check for compliance with Reach so that they could continue to market their chemicals on the EU market (and having done so, have the reasonable hope the global market would accept the same labelling etc)?

Once you start meddling with a widely accepted system, where does it all end?

They call it mango guano

Raychelle Burks’ story of the early use of the pigment Indian yellow and the confusion between ‘true’ and ‘fake’ forms was fascinating (Chemistry World, September 2017, p79).

Burks refers to the ‘true’ pigment as the magnesium salt of euxanthic acid. As this is the glucuronide formed by the excretory metabolism of mangiferin, a natural product found in mango leaf and hardly anywhere else, it is hard to see where Indian yellow could have come from other than cattle fed mango leaf.

While conducting animal research in Indonesia, we found that in cattle fed moderate amounts of mango leaf the mangiferin was completely degraded by ruminal microbial metabolism.

However, with prolonged feeding at high levels, as when used as a major dry-season feed in East Java, cattle did indeed excrete intensely orange-coloured urine. We have little doubt the pigment could be recovered from that.