Your opinions on redefining the kilogram, timing viscosity and Victorian anaesthetics

No weight to the argument

We do not know that the so-called ‘fundamental constants’ are universally constant. Indeed, some cosmologists have conjectured that the speed of light in a vacuum varies. Why not define the kilogram as the mass of a specified number of silicon-28 atoms?
Peter Nelson MRSC
Hull, UK

As a theoretical chemist with more than 45 years of experience, I found the research on why humans aren’t constantly bursting into flames (Chemistry World, August 2017, p35) a bit disconcerting. I can hardly believe that, as the article suggested, chemists have tried to dispel the myth of spontaneous human combustion for over 160 years.

Aside from the title, the science in the cited paper seems to reply on models invoking m-center, n-electron, p-fold, sigma and pi resonating ‘bonds’. In a time when molecular states and reaction paths can be followed by first-principles electron-density calculations, I find such models a bit out of fashion. For molecules up to, say, 10 atoms or so, we can now see electrons and nuclei moving freely and finding their ways to evolution, without need of drawing bond lines or pushing electron dots around. Are we going to send that venerable institution, the chemical bond, to retirement and replace it with chemical deed (dynamic evolution of electron density)?
Angelo Gavezzotti FRSC
Milan, Italy 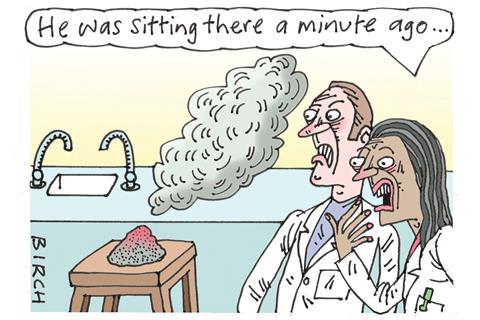 I was interested by Andrea Sella’s article on the Ubbelohde viscometer (Chemistry World, August 2017, p78). Polymer chemists of a certain age will remember the Ubbelohde for a great advantage Sella didn’t mention. Before chromatographic methods were developed, estimating the molecular weight of a polymer was challenging and one popular approach was to measure solution viscosity. Because polymer molecules in good solvents occupy a lot of space, and the coils overlap, the solution viscosity depends strongly on concentration and, to get useful results, it’s necessary to measure at several dilutions and extrapolate to zero. In the Ubbelohde viscometer, the volume of liquid used in the measurement is independent of the total volume in the viscometer (as long as there is enough to fill the measuring section). It’s rather easy to make measurements on the highest concentration then add solvent to the lower bulb to dilute the solution and re-measure. This was a huge improvement on the previously popular Ostwald viscometer, which required the same total volume of solution for each measurement. I still have memories of sitting for hours in front of an Ubbelohde viscometer, clutching a stopwatch.
Norman Billingham MRSC
Brighton, UK

Readers will have come across dichloromethane as a chromatography eluant, a metal degreaser or as an ingredient of paint stripper (Chemistry World, August 2017, p15). In view of the last use, it is perhaps surprising that it enjoyed a 20-year vogue as an inhalational general anaesthetic.

Chloroform, popular with patients, was introduced into anaesthetic practice in 1847, but was accepted as being less safe than the alternative agent, diethyl ether. This stimulated searches for materials that were not associated with unpredictable deaths. In 1867, anaesthetists began to use dichloromethane (known as methylene chloride) and it was endorsed by the leading practitioners of the day. However, in contrast to chloroform, it was expensive to produce and some unscrupulous manufacturers began to substitute a 4:1 mixture of chloroform and methanol instead. The fact that its constitution had changed and now included the toxic alcohol did not bother the anaesthetists, who continued to use it to render their patients unconscious. However, by about 1890 it had become clear that the advantages of dichloromethane or the 4:1 mixture were illusory: for the next 60 years the three principal general anaesthetics were chloroform (neat) and ether for major operations, and nitrous oxide for minor ones such as teeth extraction.
Alan Dronsfield FRSC
Alfreton, UK