David Jones, who died in July aged 79, was unique (Chemistry World, August 2017, p79). He was one of the most knowledgeable, imaginative, talented and eccentric scientists whom we have ever had the privilege to know. He was also an outstanding science journalist with the knack of persuading his readers and viewers not only to enjoy science but to think about it in completely new ways. How would you design an unrideable bicycle or use two lasers to knit a pair of socks? 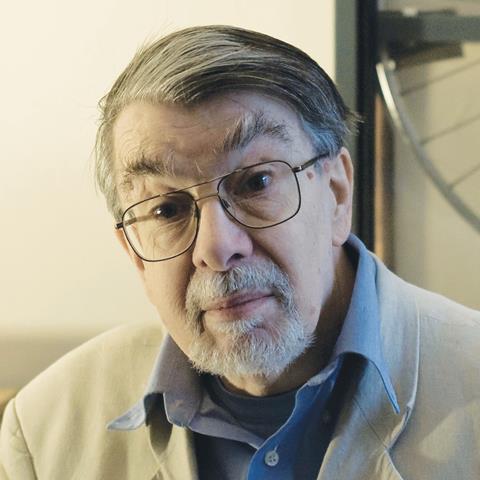 From 1964 to 2000, David wrote the Daedalus column that appeared weekly, first in New Scientist and later in Nature and The Guardian. More recently, he was a frequent contributor of back page columns to Chemistry World. He also devised extraordinary demonstrations for science programmes on Yorkshire TV; for example, persuading members of the audience to run across the surface of a bath of custard to illustrate its thixotropic properties. Later he presented his own programme on German TV.

We first got to know him in the 1970s and quickly were entranced by his extraordinary inventiveness – he could take an idea based on well-known science and transform it into something totally far-fetched without you ever quite knowing where he had fooled you. Daedalus’s ideas were intended to go beyond the possible but they turned out to be feasible surprisingly often. His most celebrated coup was predicting the existence of hollow carbon molecules in 1966, elaborated in his book The inventions of Daedalus in 1981. This predated Harry Kroto’s discovery by nearly 20 years – Harry regularly cited David’s work in his accounts of C60.

There may be a lesson for all of us in David’s work. About 20% of Daedalus’s inventions proved to be feasible, a success rate quite as high as the ideas of more conventional scientists. In future, perhaps we should all work on projects that we believe to be impossible?

It is true that plastic waste is a chronic environmental problem and, as stated by Mark Peplow in his article (Chemistry World, July 2017, p15) ‘it is a shocking testament to our ability to despoil the planet’. But, I take issue with the use of ‘our’ in Mark’s statement. Not in my name, please! It was a major omission that he failed to mention how each of us can choose whether to support this environmentally harmful system of waste; not just packaging and plastic cups but also buying garments made from synthetic fibres. How many of us knew that June was the Marine Conservation Society’s plastic challenge month?

Those thinking that novel waste-to-energy technologies can save us should think again. The feedstock is too heterogeneous, even after sorting and its chemical and physical complexity creates overtly challenging thermodynamics that are not fully understood. Although this has been known since the 1920s, governments and investors continue to waste millions seeking the ‘innovation’ that holds the answer.

The waste-to-energy industry also actually encourages the ‘make, use, discard’ economy. This is due to the operators demanding local authorities lock-in waste provision over the lifetime of the plant to ensure long-term returns on their investment. What is needed is to legislate for extended producer responsibility, as Peplow correctly states, and to support a circular economy. Until then, each of us can choose how much plastic we purchase.

Wei Lun Toh’s enthusiasm for vertical farming is infectious (Chemistry World, August 2017, p68) but needs to be tempered by awareness of the thermodynamic and economic reality. Vertical farming is a viable business at present only for high-value products of high water content (lettuce and tomatoes are about 95% water). As to growing staple foodstuffs, the cost of electricity alone will be, at best, about $100 (£77) per kilo and the ultimate limit something over $10 per kilo; vertical farming will remain uncompetitive unless the electricity used is free or a way is found to deploy natural sunlight.

When I went to university just 3–5% of school leavers did so, either out of passion or sensing a decent career. Like many of my peers, I received free education and a limited subsistence grant which local authorities and central government could afford to pay because there were few of us. Today, as government and students have found out, with so many students and an encouragement of a university education for everyone however inappropriate, this is no longer affordable and we have the ludicrous problem of student debt, as Patrick Walter highlights (Chemistry World, July 2017 p6).

In this situation, I actively encourage students who recognise that they do not have a real interest in a subject to get themselves on to an apprentice or other business training scheme. Why are these options considered to be worth less than what have become weak university degrees?

But the real solution is to reduce student numbers and number of universities to a level which the country can afford. We have been kidded for too long by the promise that a university educated population will mean peace and prosperity for all.