Derek Bailey raises his concerns over the amount of carbon sequestration that can occur before oxygen depletion becomes a significant issue (Chemistry World, August 2009, p36) and asks if the relevant calculations have been done

Derek Bailey raises his concerns over the amount of carbon sequestration that can occur before oxygen depletion becomes a significant issue (Chemistry World, August 2009, p36) and asks if the relevant calculations have been done. Although the Earth System is complex and exhibits tightly coupled feedback loops, indicative upper limits to oxygen depletion can be estimated by straightforward ’back of an envelope’ calculations as follows.

Worst case predictions for end-of-century CO2 volume mixing ratio (vmr) are an increase from the present 390 ppm to in excess of 800 ppm, a rise of approximately 400 ppm. To a first approximation the vmr of O2 would be reduced by the same amount. Therefore, assuming all this CO2 increase arises from oxidation of fossil fuels, roughly 0.2 per cent of the atmospheric oxygen budget would be required.

Another way to estimate this upper limit is to consider the oxygen required for oxidation of all known coal reserves, some 900 gigatonnes (Gt) of coal. Taking a reasonable value of 80 per cent average carbon content of coal gives a reserve of 720 Gt of carbon in coal. Since the vmr of CO2 increases by about 0.45 ppm per Gt of carbon released, oxidising all of this coal would raise the atmospheric CO2 vmr by 324 ppm. Using exclusively atmospheric oxygen for this oxidation would require roughly 0.16 per cent of atmospheric O2.

However, since CO2 has a long atmospheric residence time, the fate of fossil-derived CO2 - captured and stored underground or released to the atmosphere - is, in the medium term, irrelevant as far as global oxygen concentrations are concerned. The oxygen required for carbon oxidation will be sequestered either way.

In natural carbon dioxide sequestration by trees, oxygen is a product, and this would need to be factored into any further consideration of this question.
J C Jones
School of Engineering, University of Aberdeen, UK

Philip Ball’s Crucible  (Chemistry World, July 2009, p36) describes the early origins of structures with the combination of hexagons and pentagons that the molecule C60 displays.

In their fascinating book, In our own image  (Kluwer Academic, New York, 2000), Istvan and Magdolina Hargittai - structural chemists from Budapest, Hungary, with a long-standing knowledgeable enthusiasm for symmetry and scientific biography - suggest a link between the geometry of R Buckminster Fuller (1897-1985) and the work of Italian architect Francesco Borromini (1599-1667), who put star polyhedra on buildings such as San Ivo Church della Sapienza, Rome. 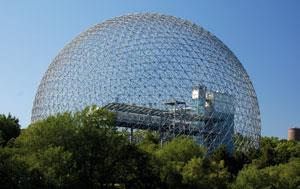 Not quite Leonardo illustrating Pacioli’s book, but the Hargittais’ chapter on Fuller is prefaced by the graphic artist Istvan Orosov’s imaginative image of Fuller and fullerene.

Fuller’s best-known geodesic structure is the Montreal (almost) dome for the 1967 World’s Fair (above), but the UK second world war Vickers Wellington bomber (designed by Barnes Wallis) was described as having a geodetic construction.
D W Jones
Bingley, UK

Lewis Brindley tells us that ’toxic chemical dyes are frequently used in the textile, printing and paper industries .’ (Chemistry World, August 2009, p27). This is the exact opposite of the truth. The chemical and colour-using industries have combined successfully in the past 40 years to eliminate manufacture and application of both acutely toxic dyes, and those dependent on well-known and listed long-term carcinogens such as benzidines, 2-naphthylamine, and other aromatic amines.

With the possible exception of a few rogue traders and others in the remaining unregulated markets, all major dye-producing and using countries comply with strict regulations covering the safe manufacture and use of dyes. To claim that toxic dyes are used ’frequently’ is a travesty.

What we find particularly surprising and annoying is that the house magazine of our own profession is now evidently prepared to adopt this practice. The western chemical industry, including dyes, textiles and other colour users, is under immense economic threat. It would be nice if Chemistry World  would at least take an informed approach in its comments on ’chemical dyes’, and cease to publish misinformation whose only value is as ammunition for the chemical industry’s enemies.
P Bamfield CChem FRSC
Penarth, UK
M G Hutchings CChem FRSC
Holcombe, UK

You are right to say that great strides have been made in reducing both toxicity and carcinogenicity of dye chemicals in recent years. But that does not mean they are now completely harmless to the environment, as any chemical can be toxic with sufficient dose.

The dye industry is worth billions of dollars and vast quantities of dyes are released as effluent every year, especially in countries like China and India. These dyes (and their oxidised or reduced byproducts) pose a toxic threat to the environment through the sheer quantity of their use, rather than their potency.

I am surprised that in her article on MBAs, Caroline Tolond made no reference to the support the RSC has given to the University of Strathclyde’s MSc in Chemical technology and management (Chemistry World, August 2009, p77).

This was developed with experts from the RSC to provide a more suitable alternative to an MBA, so it has the mini-MBA elements of finance, marketing, and HR, plus the subjects needed to develop technical competence, as well as providing subjects that link to operations and engineering. It appears on the web.
B Dickson
Glasgow, UK

Thanks for pointing out this MSc course. I wasn’t aware that its contents mirrored the content of a mini-MBA so much, but have made a mental note to mention it to clients in future.

The article ’Hoisting the solar sail’ was quite interesting though a bit short on chemistry (Chemistry World, July 2009, p42).

While the researchers are waiting for their space mission, they could perhaps get some practice by doing something less useful: as far as I’m aware, no-one has yet made a successful balloon that depends on a partial vacuum for lift.

If I were rich and philanthropic, I’d offer prizes not just for the best free-style design, but also for one that can lift its own pump/propulsion unit, and one that can be rolled up and put in your pocket, a bit like inflatable bubble-wrap.

Most likely, such devices would be too fragile to be of practical use, but they would be nice to have as toys.
C R Lee
Paris, France

Whatever is implied in the article One giant leap, the overwhelming number of lunar craters were caused by meteoric impact rather than vulcanism (Chemistry World, August 2009, p50).
I F Ferguson MRSC

I fully concur with the views expressed by M D G Dabbs (Chemistry World, June 2009, p37) regarding the banning of chemicals. The EU approach is far too heavy handed and consequently chemicals which are otherwise used in a prescribed manner are being withdrawn in favour of methods which are far more environmentally negative.

This has, in my experience, been the case with the implementation of the EU Reach Regulation and in relation to pesticides. Many pesticides for agricultural use are being withdrawn under the Reach process without a proper risk management process being undertaken. Again, if pesticides are used in a controlled manner they are effective and achieve the desired affect.

Many of the currently used proprietary brands of pesticides are readily broken down in the soil to non-toxic products.

There are currently more than adequate controls being exercised over chemicals and chemical usage. These are better than adopting an outright ban on chemicals, based on emotional and green ideology.
P L O’Brien
Cork, Ireland

Having read the review of Slow death by rubber duck  (Chemistry World, July 2009, p14), I would like to point out that the authors’ claim that ’all the chemicals we tested have been linked to serious human health problems’ is not true. Diethyl phthalate has been tested extensively and no link to human health problems has been found.

The scares about diethyl phthalate arise from the inability of some to distinguish between it and bisdiethylhexyl phthalate.

Even then the link to concerns about human health ignores the fundamental principle of dose-response relationship.
C Sell CChem FRSC
Kent, UK

The illustration in your article on ageing shows a stoop that is often assumed to develop with old age (Chemistry World, August 2009, p40). As my osteopath will tell you, with proper awareness and attention to posture and exercise, we can preserve an erect and proud posture well into our old age. See you in the gym.
N Pacey CChem MRSC
Birchwood, UK

In his interesting article on the Thiele tube (Chemistry World, August 2009, p72), Andrea Sella states that ’the first analytical melting point - that of benzamide - was reported by Justus Liebig and Friedrich W?hler in 1832.’ Having just translated the first ever book on lipid chemistry (Michel-Eug?ne Chevreul, Recherches chimiques sur les corps gras d’origine animale, Paris, 1823) from French into English, I can report that melting points were already used when Chevreul worked on animal oils and fats (1811-1823). He used them for several different purposes:

When Chevreul prepared palmitic acid, he started by saponifying a sample of human fat which he had obtained from a prisoner who had been tortured to death. 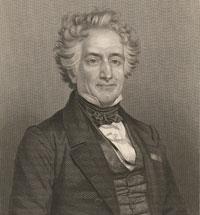 © ENGRAVED BY C COOK FROM A DRAWING BY MAURIR

He acidulated the soap with tartaric acid, then reconverted the acids back to potassium soaps and washed them with alcohol to remove further low melting material. Finally, he recrystallised the potassium palmitate from alcohol. He obtained a pearly deposit which he called margaric acid (palmitic acid). The melting point of the acids obtained from the soaps before they were purified was 53?C; washing raised it to 59.5?C and recrystallisation to 60?C.

Chevreul also prepared stearic acid by saponifying mutton tallow stearin and arrived at an acid with a melting point of 70?C. This led him to conclude that the acid was not the same as margaric acid.

Chevreul carried out many elemental analyses using the method developed by Lavoisier and subsequently improved by Gay-Lussac and Berzelius and, working at the cutting edge of analytical chemistry himself, described his method of elemental analysis in detail. With respect to measuring melting points, he does not go into detail at all. When he measures the temperature of a solidifying melt, he mentions that he uses the thermometer as agitator but otherwise he apparently assumes this to be common knowledge. This gives me the impression that melting points were already measured on a routine basis before 1811.
A J Dijkstra
St Eutrope-de-Born, France