This paper (Angew. Chem. Int. Ed., 2009, 48, 3129) describes the formation, in an aqueous mixture, of unusual clam-like species in which alkali metal cations are bound within the cavity formed between a pair of hydrogen-bonded, shell-like, cyclotricatechylene ions.

In the summary of our paper we wrote: ’the results reported herein provide unusual examples in which alkali metal cations (specifically Rb+ and Cs+) prefer to surround themselves entirely by aromatic

systems, rather than oxygen centers of either water or catechol sub-units’. 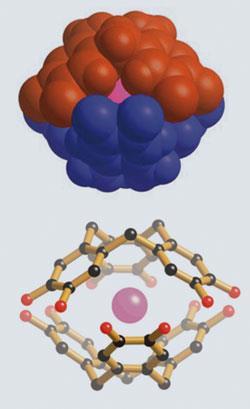 Space-filling and ball and stick representations of a Cs+ cation encapsulated within the clamlike structure.

We stress the word ’entirely’. Morel-Desrosiers considers the use of the words ’curiosity’ and ’discovery’ in the Chemistry World  article to be ’improper’ because a calorimetric study she and her co-worker had reported in 2006 suggested interactions between the

system of a calixarene and certain alkali metal cations; in other words her complaint was that we were reporting something that she had already discovered.

Her letter gives the impression that the aromatic-alkali metal interaction she was suggesting was new: it was not. Numerous earlier crystallographic studies had unambiguously indicated the binding of alkali metal cations in calixarene cavities.

In our alkali metal clams, the cation is completely encapsulated. In contrast, the guessed structure of the Cs-calixarene accompanying Morel-Desrosiers’ letter reveals that a large fraction of the Cs+ ion ’surface’ is left exposed to the outer solution. It is very likely that water molecules are bound to her Cs+ cation in these exposed regions.

This view is supported by numerous structural studies (many pre-dating the work described in her 2006 paper) involving Cs+ and Rb+ cations bound within a calixarene cavity, in all of which some species in addition to the calixarene  p surface associates with the cation on the exposed side.

In our paper we properly refer to many examples in the literature in which alkali metal ions associate with aromatic surfaces.

We stand by our claim that the formation in aqueous media of products in which bare alkali-metal cations are surrounded only by aromatic surfaces is unusual.

In conclusion, the derisive tone adopted by Morel-Desrosiers in dismissing our clam analogy is unwarranted. In the light of the structures presented in our Angewandte  paper, the analogy is natural, pleasing and useful.

B Abrahams and R Robson
University of Melbourne, Australia

As a retired long-term employee of the PVC industry with six years of dealing with the environmental questions faced by the industry, Rebecca Trager’s item on Hewlett-Packard filled me with despair (Chemistry World, September 2009, p10).

Does Chemistry World  know so little about PVC that it publishes Greenpeace’s opinions on the material without at least the opportunity for the industry or its trade association to provide some balance of information?

As to fire retardants, I have insufficient knowledge to comment but I dare to doubt that emissions from a computer would be more harmful to a child than a fire resulting from the self-ignition of a computer.

May I appeal [...] to ensure that information from environmental activists is properly balanced by that from qualified and knowledgable chemists?
J Baldwin CChem MRSC
Darlington, UK

Iread with interest the piece on Hewlett-Packard but I was disturbed that the magazine of a professional society states as established fact rather than as a Greenpeace view, that certain chemicals such as PVC and its additives exhibit effects not proven in any reputable literature -disregarding European experts and competent authorities’ decisions.

To be more specific, PVC containing phthalates, lead and cadmium was attacked in the article. Phthalate plasticers have recently been the subject of extensive research by the EU and the vast majority have been given the green light for ongoing use. The industry phased out cadmium stabilisers in 2001 and PVC products containing lead stabilisers have been used safely for many years. Also, it is very likely that the PVC products used by HP, and the subject of the protests, would not contain lead or phthalates.

Greenpeace is a campaining organisation, very often to good effect on important causes, but when it comes to PVC its attacks on this important formulated polymer are based on mistruths and ignore recent industry and regulatory research and progress.

The article, while reporting well the pressure certain computer manufacturers are currently under, seemed, in my view, to promote the misconceived views of Greenpeace.
A M Hay CChem MRSC
Marlborough, UK

I talked with Hewlett Packard and did include their full response. The article includes entirely accurate information and was, I strongly believe, framed in a balanced way.

Anthony Hardwicke (Chemistry World, August 2009, p38) is correct in saying that research is top of the agenda in Oxford, but from my experience as an undergraduate (2000-2004), only a few academics shy away from teaching; the collegiate system makes teaching compulsory for all college fellows. It’s a contrasting situation elsewhere, where teaching is more optional. The ’big dogs’ heading up the larger research groups can effectively avoid teaching because they consider themselves too important (and, dare I say it, they can bully their way out of it). In my opinion, every academic has a responsibility to teach as it is crucial to inspire the next breed of chemists.

University teaching is becoming spoon-fed and perhaps focus should be less on direct teaching, but more aimed at supporting students whilst encouraging independent learning. This is one thing Oxford does well. There is no choice but to read around the subject area since you cannot hide at the back of the class during the Oxford tutorial system when it’s two students to one academic.

I was fortunate enough to be part of the first MChem year to take up residence at the ?64m Chemistry Research Laboratory (CRL). No one can deny Graham Richard’s shrewd business approach to secure funding for the CRL, and in my opinion he was also an approachable academic too. Once, during a tea break, he came and sat with me which I doubt many other department heads would have done with an undergraduate student. Oxford academics understand the importance of teaching and, in my experience, do it to the best of their abilities.
J Gaynor AMRSC
Liverpool, UK

On reading coverage of fuel cells in Car catastrophe  (Chemistry World, August 2009, p84), I have the following point to make. The absence of mention of the high efficiencies of fuel cells when c ompare d with certain other ways of making electricity is surprising. Consider the reaction:

G) for the reaction divided by the enthalpy change (

An upper bound on the efficiency of this is the efficiency of a reversible Carnot cycle working between the same temperatures, a restriction which does not apply to fuel cells.
J C Jones CChem FRSC
Aberdeen, UK

I have seen many demonstrations with liquid nitrogen, but my favourite consists of connecting a light bulb to a cell, then dipping the cell into the flask, which causes the bulb to dim. Upon removal it begins to brighten again, as the cell returns to room temperature. A related experiment involves connecting the bulb in series with a long coil of wire, then dipping the coil into the liquid nitrogen. This decreases the coil’s resistance, and increases the current flowing through the bulb, brightening it.
J Scott-Brown
Fareham, UK

In their ’No mystery’ letter (Chemistry World, March 2009, p37) R M Williams and J I Seeman try to show that the original 1918 short paper by Paul Rabe and Karl Kindler is sufficient proof to establish a claim to the quinotoxine to quinine transformation. Especially so, as it is supported by a recent historical study published by Seeman and an experimental one by A C Smith and R M Williams.

In my opinion, the matter is not closed, but becomes instead an interesting further experimental study. More so, as the novel reactions may be studied using smaller molecules, or similar experimental conditions, applied with various substrates.1,2
R E Sioda
Warszawa, Poland

Alfred Maddock, affectionately known as Alfie, died on 5 April 2009 at the age of 91. He was one of the last living British scientists to have worked on the Tube Alloys Project, alongside the US Manhattan Project, in Montreal, Canada. After the war, he became a nuclear chemist of international influence throughout a career of over 40 years, based in the chemistry department at the University of Cambridge. 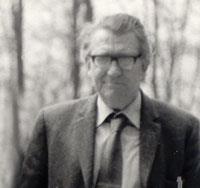 He was a man of immense intellect, with tremendous intensity and enthusiasm for a wide range of scientific and cultural topics. This intensity may have been the cause of his periodic forgetfulness, which led to a host of colourful anecdotes. These ’Alfie stories’ cemented his self-declared reputation as a Cambridge ’character’. In truth, Alfred was an extraordinarily open, unassuming, helpful, kind and generous man.

He graduated with a BSc from Imperial College London in 1939 and began a PhD thesis there with Harry Emeleus on silane chemistry. He completed the work for his PhD very quickly, and became involved in other defence-oriented inorganic research before moving first to Cambridge and then to Montreal as part of the Tube Alloys Project. In Montreal he directed a small group studying the chemistry of plutonium. After short periods at the new nuclear laboratories at Chalk River in Canada and then at Harwell, he came to Cambridge in 1948 as a lecturer in chemistry, in the inorganic section headed by Harry Emeleus. He became a Fellow of St. Catherine’s College, and retired as Reader in 1984. However, as he said at his retirement, ’scientists do not retire’, and his curiosity and enthusiasm kept him working actively on many things, including a book and various other publications, until at least 1998.

After his early wartime research on silanes, arsine, hydrogen telluride, hydrogen fluoride and plutonium, Alfred made internationally important discoveries in many areas, including areas of radiation chemistry and radioactive techniques: for example, the chemical effects of nuclear transformations, the separation and chemistry of plutonium, the chemical and mineralogical uses of Mossbauer spectroscopy, and the chemistry of positronium.

For most of his career Alfred was a widely respected advisor and technical consultant on nuclear research, particularly with the International Atomic Energy Agency. His role in developing nuclear chemistry in countries such as Mexico, Brazil, Argentina, Chile, Portugal, the Phillipines and Greece was of great significance and he is seen in many of them as something of a father-figure for the discipline.

His outstanding research has been recognised by an honorary doctorate from the University of Louvain, the Becquerel Medal from the RSC, and the Order of Merit in Science, Brazil’s highest scientific award.

James Barber draws attention to the chemistry of the biological world that captures CO2  and turns it into high-energy compounds [.] (Chemistry World, August 2009, p12)

The process of anaerobic digestion is well understood but gets poor publicity. The technology is much cheaper and easier than CCS and can be applied to converting the waste from food processing as well as plate scrapings, and also to large sewage works, as in Stockholm, and small toilet blocks, as in the slums of Nairobi.

The digestion process not only gets rid of the waste but also provides valuable fertiliser as well as new, flexible, energy-rich fuel (methane). Instead of spending billions developing CCS it seems the money could be better spent on widespread anaerobic digestion.
E Woodward
High Wycombe, UK