Do you cringe when a relationship is described as involving ‘chemistry’?

In 1809, the German writer and amateur scientist Wolfgang von Goethe published his novel Elective affinities. He wondered whether human relationships – the pushes and pulls between individuals – might not be governed by rules akin to those of chemistry. He was perhaps the first to think of friendships as being like reactions. Among chemists, the most legendary friendship was that of Justus Liebig and Friederich Wöhler. But other friendships, like those of Hans Luggin, had a profound influence on the course of science.

Born in Klagenfurt in Carinthia (now part of Austria) in 1863, his father was a lawyer and member of parliament, who had moved from the Süd Tyrol – in what is now Italy – to the more prosperous north. Hans’s studies took him to some of the best universities in Europe: Vienna, Strasbourg, and the German University in Prague, from which he obtained a doctorate in 1888. After a year studying electric arcs in Vienna, he moved to Graz – not far from his home town – where he began research into the interactions between metals and electrolytes. It was a canny choice.

Graz was one of the key places in Europe to be doing physical chemistry. Ludwig Boltzmann was professor and was building his highly controversial statistical theories that would eventually allow him to connect the macroscopic properties of gases and classical thermodynamics to a discrete, particulate theory of matter. A photograph taken in the late 1880s in Graz shows Boltzmann surrounded by his colleagues – among them are Walther Nernst and Svante Arrhenius, two of the fathers of our understanding of ionic solutions. Arriving in Graz, Luggin became assistant first to Boltzmann himself, and later to his successors, the physicists Ignaz Klemençiç and Leopold Pfaundler. 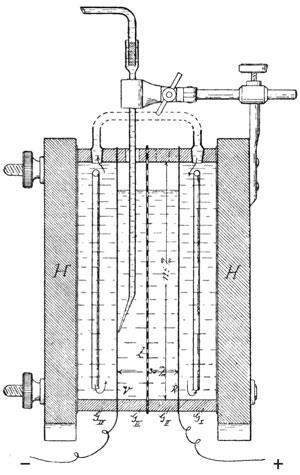 When Luggin and Arrhenius met, the two took to each other immediately. Luggin’s interest in electrochemistry deepened and he began to focus on polarisation – the build up of charge on metal electrodes as a function of applied potential that lies at the heart of the puzzle of the overpotential. Inevitably this led him towards electrocapillarity, the change in a liquid’s surface tension under an applied voltage. In a series of very difficult experiments, he extended the contemporary studies of electrocapillarity beyond mercury, to cover molten metals in molten salts.

Arrhenius was so impressed that, on his return to Sweden, he invited Luggin to Stockholm where their friendship deepened. Here, Luggin carried out delicate experiments on electrochemical cells segregated by very thin metallic membranes, with which he could test his ideas on the charging of metals. But he also began to investigate one of the most recently discovered and most mysterious phenomena, the photoelectric effect, developing a light sensitive electrode.

After two years, it was time to move back to Germany with the habilitation that gave him licence to teach. He took a lectureship at the technical college in Karlsruhe in 1896, specialising in theoretical electrochemistry. On arrival he met the ambitious Fritz Haber, who was beginning his quest to make chemistry useful. Haber’s interests were turning increasingly to physical chemistry. He and Luggin quickly became the closest of friends and Luggin, the only physical chemist in the department, seems to have acted as mentor for his ferociously driven friend. Their intense discussions ranged over thermodynamics and especially electrochemistry, and guided Haber’s groundbreaking electrochemistry textbook of 1898.

Haber’s first electrochemical study addressed the reduction of nitrobenzene at a platinum electrode. He demonstrated for the first time that making the potential more negative was equivalent to using a more powerful chemical reducing agent. If the potential were too negative (as might happen if zinc were used directly) additional reduction pathways became available, reducing selectivity. Haber’s suggestion was to keep the potential fixed at the lowest possible value. But establishing the precise local potential of a working electrode seemed impossible. Luggin suggested the solution. Rather than immersing the reference electrode in the same compartment, it would sit in a separate chamber linked by a fine capillary reaching close to the electrode under interrogation. Luggin also contributed a clever resistance bridge. It worked, and Haber’s blockbuster papers quickly became classics.

Luggin, however, busy with teaching and working on the connections between electrochemistry, photography and the photoelectric effect, never published his method. In 1899, he fell gravely ill and Haber spent days by his friend’s bedside. Luggin died just before Christmas, leaving Haber distraught. Throwing himself into his work, he wrote paper after paper in which he drew attention to Luggin’s crucial role. In an obituary, Arrhenius described Luggin as the best and most pleasant companion; loyal, noble, and sincere in all he did. The ‘Luggin’ remains in textbooks to this day.

So if, like me, you cringe when a relationship is described as involving ‘chemistry’, think instead of Luggin, of Arrhenius, and of Haber.

Thanks are expressed to Daren Caruana for teaching me some electrochemistry