Competition might work in the short term, but a supportive environment produces more sustainable results 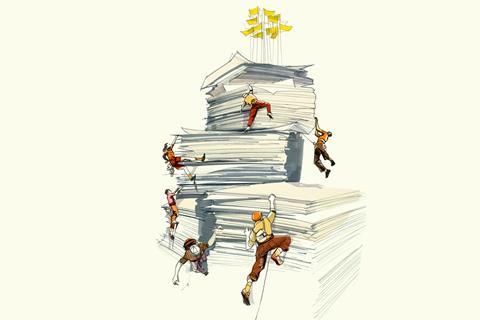 Motivation is a fickle beast. Although chemists tend to be a motivated bunch, on a day-to-day basis focus waxes and wanes for everybody, sometimes in a seemingly random manner. External changes can further compel longer-term peaks and troughs in commitment. Although frustrating to a logical brain, this time of year belies the non-ideal reality. The clear spike in gym attendance at the New Year rapidly attenuates, and strong-willed scientists aren’t immune.

Although the motivation towards big dreams of societal change seems wildly different from the imperative to finish a report or a manuscript, ultimately it’s a question of perspective. Science lists ‘alignment of work culture values’ as one of its most-cited features in the employee-ranked Top 20 Employers list. Selected comments indicate that global concerns such as environmental issues can be as important to scientists as personal ones, like career progression and management support. A heartening undercurrent of knowing your research improves the world makes filing those reports a smoother process. Big picture goals make the smaller ones surmountable.

For students, there’s a very clear and intensely motivating main objective: to graduate with a high-ranked degree. I certainly also found progression towards future impact vital. Even though I wasn’t having any significant effect on the world at the time, I felt assured that my training was an enabler for later advantage. Organic chemistry training has a reputation for high to extreme levels of competition, and a battle is another great motivator to get results.

Work with, not against

By the end of my student life though, I found that defeating the competition was a paltry motivator compared with working with them for a shared dream. I remember debating with an older student over reaction mixing. He claimed that one type of agitation worked best for homogeneous mixtures, and I cited a different optimum that I’d seen in the literature (at least we both agreed that baffles helped). Useful as it often was to chat through queries with labmates, this particular discussion ended with the assertion, ‘well I’m older and I know more than you so it’s most probable that I’m right!’ as he stomped out of the lab, gawping first-years watching in bewilderment. A bad breakfast perhaps. Although the student’s parting statement was probabilistically true, the less likely scenario won out – I was right this time. The conflict gave me an extra bout of energy to double-check what I already knew, learning more as I reinvestigated. It was so inspiring that I instantly recall my new knowledge from that day whenever the topic of large-scale agitation arises! However, I did wonder how much of science had fallen behind due to such prescriptive logic.

Similarly, many successful people cite teachers or career advisers who scoffed that they’d never amount to anything as some of the greatest motivating forces in their life. The desire to prove oneself against naysayers is strong. In the most toxic environments I’ve heard the phrase ‘if you’re not miserable, you’re not working hard enough’, and I certainly understand what’s behind that negative statement. Fear of consequences keeps junior scientists on the straight and narrow, but reality is more complex. While the daily drudge does keep students powering through, creative research instead springs from freedom to play around. Although I was still getting positive feedback for my enthusiasm at the more negative times, I found I was sourcing it more from motivation hacks like gamification, Pomodoro-like techniques, or everybody’s favourite, caffeine. Much more sustainable to simply be in a welcoming environment! This is intrinsic versus extrinsic motivation: success rates are higher for intrinsically meaningful work rather than avoiding punishment.

The Covid-19 pandemic has unsurprisingly turned many people’s traditional motivation paradigm on its head. One of my friends, though horrified by what’s happening externally, admits he personally is having a better time, pursuing all his work from his comfortable front room. I’m glad these exceptions exist, but most have experienced the opposite: office worker motivation is reported to have taken a nosedive. People worldwide are losing access to the tools they used to use to keep them going.

Ultimately, motivation is welfare. Miserable scientists will continue to put in the daily grind, but their productivity and potential will be better exploited elsewhere. My advice is to push for what intrinsically motivates you – the rest will follow.