A few months ago, I bought a cheap infrared camera. It’s a hilarious toy that can be used to map the invisible, from pipework in walls to people hiding in the night. The delight that still comes from playing with these gadgets is just a reminder of quite how mysterious the electromagnetic spectrum remains – and what a surprise it must have been when it was first discovered. 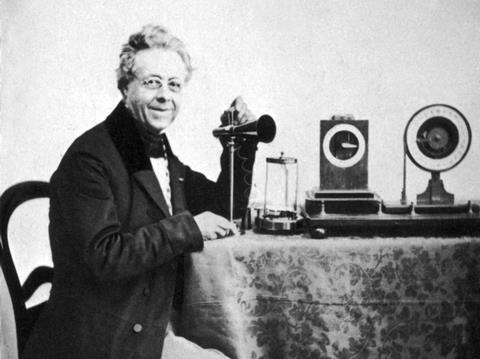 Macedonio Melloni, Italian physicist (1798–1854). Inventor of the thermomultiplier and originator of climate science

An important step was taken when William Herschel, the Anglo–German astronomer, decided to establish which of Newton’s seven colours of the rainbow were responsible for warmth. Herschel set up a prism to project a spectrum of sunlight and measured the effect of each colour with a blackened thermometer. The temperature of the thermometer rose as he moved from violet to red, but actually reached a maximum in a position beyond the visible spectrum. Herschel recorded his finding: ‘radiant heat will at least partly, if not chiefly, consist, if I may be permitted the expression, of invisible light’. No one realised the significance of his discovery.

All this changed in 1821, when Thomas Johann Seebeck, an Estonian physicist working in Germany, discovered a curious effect: if two dissimilar metals were joined together at two points, a current flowed if the junctions were at different temperatures. In Italy, the physicist Leopoldo Nobili (1784–1835) began to investigate. He built a chain of alternating soldered bars of antimony and bismuth, which he assembled into an array. When one side was warmed, the resulting current was measured by his newly designed ‘astatic’ galvanometer, comprised of two oppositely magnetised needles suspended on a torsion thread, one inside a coil and one that compensated for the Earth’s magnetic field. Nobili proposed his ‘thermoscope’ as a new way to measure to temperature.

While he was doing this work, Nobili began to correspond with Macedonio Melloni. Melloni spent his summers out in the countryside and had become fascinated by the seasons and the alternation of hot and cold. His obsession with heat had led him to a teaching post at what is today the University of Parma. When he heard about Nobili’s device, he realised that it offered a way of measuring not temperature but the intensity of radiant heat. With Nobili’s encouragement, Melloni began to improve the thermoscope. 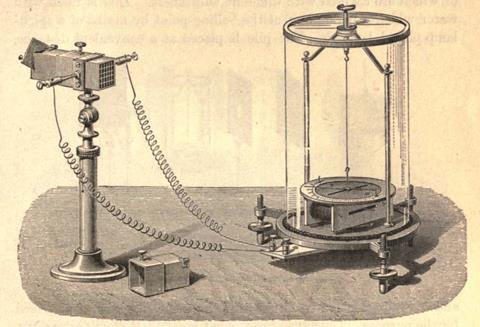 Melloni assembled the antimony–bismuth chain into a block of up to 38 bars, each 20mm long and a millimetre or two across. Insulated with paper and soldered in alternating series, the block of rods sat in a small copper box, the faces painted with lamp black to better absorb the heat. Two wires led to a galvanometer of his own, improved, design.

The sensitivity and speed of Melloni’s device was unmatched and he found radiation was everywhere. He could detect the warmth of a person standing 10 metres away and showed that caterpillars are warmer than butterflies. His first paper was with Nobili, but after that he published alone. He showed that different surfaces had different emissive powers. More importantly, he was able to quantify the diathermancy of different solid materials – their ability to transmit heat. Blocks of rock salt were completely transparent and sheets of rock crystal (quartz) absorbed about half of the light. Iceland spar, the calcite crystals used to polarise light (Chemistry World, June 2016, p48) and glass, were almost completely opaque.

Unfortunately, Melloni’s research was disrupted by his political activism. His radical views forced him to flee Parma in 1831, first for Geneva and then to Paris. He visited London in 1834, where he was awarded the Royal Society’s Rumford Medal on the recommendation of Michael Faraday, before returning to Italy in 1839. He died of cholera in an epidemic in 1854.

But the story was not over. In the late 1850s, the Irish physicist John Tyndall – Faraday’s successor at the Royal Institution – revisited Melloni’s work. He measured a series of liquids using the thermopile and then surveyed gases. The reason was Joseph Fourier and Claude Pouillet’s suggestion that some component of the atmosphere was responsible for setting the temperature at the surface of the Earth. What was this ‘greenhouse’ component?

Needing transparent windows, he posted a message in Philosophical Magazine asking for rock salt. John Herschel, William’s son and the Astronomer Royal, immediately sent him a block from which he had earlier fashioned lenses and prisms to study the optics of the radiant heat. Tyndall cemented two salt discs at either end of a tube, which he could fill with different gases. With a metal cube filled with boiling water at one end as a heat source, he could measure the radiant heat at the other with the pile and galvanometer. But when he saw almost no change when his tube was filled with air, he made an exquisite modification. Tyndall placed an identical heat source on the other side of the pile and, with the tube under vacuum, set the galvanometer to zero. With this differential method he could measure delicate changes in intensity due to gas in the tube. On 24 November 1859, Tyndall filled a tube with dry ‘carbonic acid’ and observed a huge absorption. He had identified the gas responsible for Fourier’s greenhouse: CO2.

Today, few know Melloni’s name. But by making Herschel’s ‘invisible light’ visible he invented climate science – a discipline that, like its father, has moved from the scientific to the political. Perhaps infrared cameras aren’t just toys after all.

Italian physicist (1798–1854). Inventor of the thermomultiplier and originator of climate science