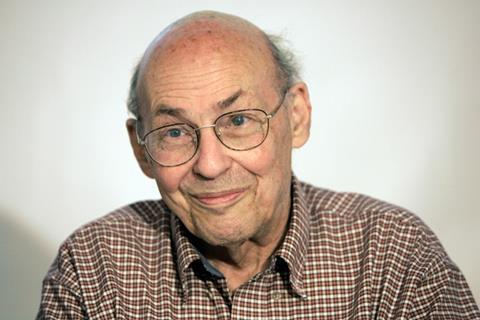 There are few things in Britain more romantically dated than seaside piers, whose gently rusting structures were once the playgrounds of the urban masses. For some, a key attraction was the peep show. Looking through a small aperture, one was transported in a tantalising new world of forbidden possibility. But peepholes are not a trivial game. They have helped us see into the invisible, especially with the confocal microscope.

The confocal microscope’s inventor, Marvin Minsky, who sadly died in January, was born in New York City. His father was an ophthalmic surgeon working at Mount Sinai Hospital, while his mother was an activist in the city’s Jewish community and a strong proponent of the establishment of a Jewish state in the Middle East. Thus Minsky grew up in a household where science underpinned knowledge and open discussion and argument were encouraged. As he grew up, he played with his father’s collection of lenses and other optical apparatus. ‘I would take them apart and he would quietly put them back together,’ he once reminisced.

With his manifest passion for science and maths, his parents sent him for a time to the Ethical Culture Fieldston School, the same progressive private institution from which Robert Oppenheimer had graduated, and then to boarding school in Massachusetts. After military service, he went to Harvard to study mathematics, where he exercised his intellectual curiosity by also taking courses in neurophysiology, psychology, neuroanatomy and physics. He also delighted in playing the piano (he played at an almost professional level), taking inspiration from J S Bach to improvise fugues and canons. Eventually he deliberately forced himself away from music to focus properly on science, although he kept a keyboard in one corner of his office for most of his career.

Graduating from Harvard, he went to Princeton for a PhD, where he focused on mathematical biology. The workings of the brain fascinated him, and he wrote a thesis on how neurons could be linked together to make a ‘connectionistic learning machine’. His work was rewarded with a Junior Fellowship at Harvard, which gave him a small budget to explore almost any problem he wanted. By then he had decided that neither mathematics nor biology were for him. Genetics he rejected as insufficiently deep. It was the mystery of learning and intelligence that fascinated him.

He began to puzzle over how one might actually explore how the cells in the brain were connected. It was a daunting problem – the density and entanglement of the cells was mind-boggling, and while one could stain an individual cell using Golgi’s method, as soon as you stained more than one it became impossible to see anything with a normal microscope. The problem was this: if you illuminated your sample conventionally, you might focus your microscope on a particular spot but all the cells above and below would scatter light; this light would be collected by the objective and the image would be hopelessly blurred.

The Senior Fellow at Harvard, Edward Purcell (co-discoverer of NMR) found Minsky a basement room in the Lyman Laboratory, where he had access to the nearby machine shop and large amounts of old optical apparatus. It occurred to Minsky that perhaps the problem could be solved if there were a way of stopping the scattered light from getting into the objective in the first place. Instead of illuminating the whole sample, he would simply focus the light down onto a single point and then collect the light on the other side into the microscope. An image would be built up point by point through rastering, and the only light collected would come from a single plane. The technique would be termed ‘confocal microscopy’ by the Dutch physicist Fred Brakenhoff in the late 1970s.

This thinking led Minsky to a simple design of elegant symmetry. The light would pass through a pinhole and then a lens to illuminate a point in the sample. A second lens would then collect the light and focus it through another pinhole, where a photomultiplier recorded the intensity.

It seemed simple in principle – Minsky was delighted with the rigour and predictability of mathematical optics. But building the device required him to master the use of lathes and cutters. The pinholes also meant that the images were very dim, and he tried carbon and then zirconium arcs to improve his results. Faced with the choice between moving the spot of light and moving the sample, Minsky hesitated. Surely moving photons would be easier? The precision required to move the mirrors was too much, so he mounted the sample on what he called a pair of perpendicular electronic ‘tuning forks’ to vibrate the sample back and forth. The system worked and ghostly images appeared on the screen.

But no one was impressed. It was slow, fiddly, and the images faded after a few seconds. Attempts to digitise the data foundered as memory was prohibitively expensive. In 1957 Minsky’s brother-in-law – a patent attorney – convinced him to patent the device, and he moved on to harder things. ‘It’s so thrilling not to be able to do something,’ he would comment later on his delight in the new. Minsky would go on to become one of the leaders in artificial intelligence, and to advise Stanley Kubrick and Arthur C Clarke on 2001: A Space Odyssey, in which the character Victor Kaminski was named after him.

The truth is that his microscope was 30 years ahead of its time. Over succeeding decades, the use of fluorescent antibodies allowed life scientists to label ever more subtle structures within cells, but the same problems of blurring dogged their efforts to see the results. So when, in 1979, Brakenhoff demonstrated the clarity of fluorescence images taken by a point-by-point confocal technique using a laser, a race began to develop a technique that held the sample still, but moved the light. Today, confocal microscopy dominates the world of cellular imaging, allowing three dimensional, multicolour, and even time-resolved images. Thanks to some clever tricks, the resolution is now far below the Abbé wavelength limit.

Newton once famously said that if he saw further, it was by standing on the shoulders of giants. Minsky, more naughtily perhaps, just peeped through a couple of pinholes.