The arc of extreme chemistry 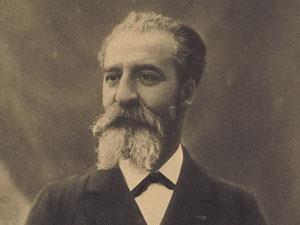 In the public mind, the chemist is an extremist, living a life of flames and explosions. It is a myth that some of us perhaps carelessly perpetuate by showing the fiery side of our subject, giving the impression that chemists dress only in padded lab coats and helmets. More corrosively, flashy exhibitions of chemistry hide the intellectual side of our craft. Yet exploring the extremes of chemical phase space has always been fruitful and there are plenty of chemists one might choose to illustrate this.

Henri Moissan was born into a modest family, originally from the south west of France. When Moissan was 12, the family moved to Meaux, near Paris, where Moissan recalls that a brilliant chemistry teacher gave him ‘a taste for work’. Moissan’s enthusiasm for chemistry was such that he seems to have studied little else, and he left school without a full qualification. He became an apprentice to a pharmacist, but it was not the life for him. He returned to studying chemistry, accepting unpaid positions and supporting himself by tutoring.

Moissan was drawn to inorganic chemistry, a field then ignored in France, and his successes led to a poorly paid junior position in the School of Pharmacy in Paris. He took over a custom analysis lab for additional income and used the space to conduct his own experiments. The experiments were successful (determining the formula of blue perchromic acid and crystallising chromic acid itself), but the business, unsurprisingly, failed.

However, by now he was married to the daughter of the wealthy pharmacist for whom he had first worked. Financially secure, he focused his attention on one of chemistry’s unsolved problems: isolating fluorine. Both Humphrey Davy and André-Marie Ampere had proposed the existence of an elusive element responsible for fluoride salts and for an acid analogous to muriatic (hydrochloric). Davy’s electrolyses of the molten salts had all foundered through corrosion of his platinum vessels and he concluded that whatever it was must be of awesome reactivity. The challenge attracted fearless chemists like moths to a flame and several died in the attempt.

Moissan also tried electrolysis, but his experiments likewise ruined his platinum equipment with expensive predictability. The secret, he reasoned, must be to work at the lowest temperatures. He condensed hydrogen fluoride at –50°C in a platinum tube and electrolysed that. The stopper at the anode quickly charred so Moissan replaced it with calcium fluoride and now obtained a steady stream of a gas that ignited silicon and boron powder in spectacular fashion. As was the custom, the Academy of Sciences sent a team to verify the experiment. It was a total failure – Moissan had gone to such lengths to purify his HF for the trial that it was a perfect insulator. However, adding potassium bifluoride provided the electrolyte necessary and the gas streamed out.

He was promoted to the only position available: the chair of toxicology at the School of Pharmacy in Paris. If he wrote a few papers on alkaloids, his heart remained inorganic. He rapidly made a variety of main group fluorides and his work on carbon fluorides led him to imagine that they might lead to the biggest chemical prize of all – a direct preparation of diamond. 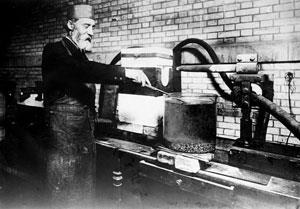 Studies of diamonds had suggested they were formed from carbon at high temperature and pressure. To achieve the high temperatures, Moissan built an arc furnace. Its body consisted of two hollowed-out blocks of lime, furnished with horizontal openings to admit a pair of carbon electrodes placed 2–3cm apart. His crucibles were made of graphitised carbon insulated with magnesia – the only oxide that could cope with the extreme conditions. Starting his steam dynamo, he would push the electrodes together until the arc struck; the furnace would ‘snore’ and then gradually go quiet, glowing first with purple cyanogen light, and then the blinding ‘lumiere Drummont’ (lime light). Flames would shoot out accompanied by ‘torrents of white smoke’. Wanting ever higher temperatures, Moissan eventually set himself up in a Paris power station where he could plough 450A at 70V through the electrodes. It was said that temperatures of 3500°C could be reached.

To achieve the high pressure, the charcoal was placed in the furnace mixed with iron – by dropping the incandescent, molten mass into water, the contraction of the iron would compress the carbon. After dissolving the nuggets, he found microscopic crystals of great hardness and density, which he would go to his death convinced were diamonds. His experiments captured the popular imagination and his peerlessly articulate undergraduate lectures were hugely oversubscribed.

In fact, Moissan had not made diamond, but instead silicon carbide, the carborundum that makes our lives go smoother. He also uncovered a huge range of borides, carbides and silicides that would unlock the bizarre worlds of main group hydrides at one end and ultrahard materials on the other. Today, arc furnaces underpin ceramics manufacturing.

Some say that Moissan was an extremist. But to me he was above all an enthusiast. As he wrote in 1897: ‘To tread a newly opened furrow, to feel complete freedom of action, and to see on all sides new vistas opening for research, brings with it a joy that only those who have had the raw pleasure of original research are fully in a position to grasp.’ He was everyone’s kind of extremist.

Thanks to Paul McMillan for the suggestion and his comments