It's time to retrofit your kitchen pans with reflux condensers, says Dylan Stiles

In essence, organic chemistry is simply a matter of mixing two things together to make something new. Whether you’re simply neutralising acid with base, or executing some new-fangled domino cascade reaction, it’s really just putting things in a flask and cooking them up. So you might think that someone skilled in the art of chemical synthesis would also make a good chef.

Chemistry and cooking are, after all, two sides of the same coin, and perhaps it’s no surprise that we sometimes conflate the two. I’ve always thought that JOC (Journal of organic chemistry) could just as easily stand for the Joy of cooking. 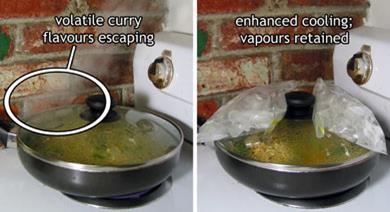 Sadly, in my experience, it’s pretty rare to find a chemist who can produce anything even remotely edible in the kitchen. I’ve met researchers who can synthesise Taxol with one hand tied behind their back, yet are unable to prepare spaghetti.

Consider exhibit A: What’s cooking in chemistry: how leading chemists succeed in the kitchen. In this cookbook (reviewed in Chemistry World, June 2004, p63), top scientists from around the world were invited to submit recipes for their favourite dishes. It’s an amusing read but under no circumstances should you attempt to reproduce these procedures. Bob Grubbs makes a great olefin metathesis catalyst, but I don’t think his pecan pie is going to win any prizes.

My theory is that both chemists and chefs descended from a common ancestor, and that our phylogenetic tree split in two sometime during the glory days of alchemy. Since then our fields have evolved separately and are now so disparate as to bear only a passing resemblance.

There is some overlap, to be sure. A well-equipped synthetic lab will have a microwave apparatus (sans ’popcorn’ setting), and a Cuisinart blender might well be distant cousin of a mechanical stirrer. And I have to concede that any process chemist would feel right at home in a brewery, with its giant reactors and distillation towers.

But too many chemists struggle in the kitchen. I attribute the majority of my own failures to a lack of standards with common cooking appliances. A recipe might say to saut? the halibut on ’medium’ heat. Medium according to who? I sincerely doubt if the BIPM (International bureau of weights and measures) has a standardised ’medium’ setting which manufacturers rigorously use to calibrate their stoves. I would be hung from the highest tree if I offered such vague instructions for the synthesis of one of my chemicals in the lab.

Worse still is the American cooking practice of measuring out solids by volume. The cup of brown sugar that you put into Grubbs’ pecan pie could vary by ? 20 per cent depending on how densely you pack it. In this respect European cooking technology is light years ahead of ours. On this side of the pond I can only dream of the day when balances are commonplace in the kitchen and recipes specify quantities by mass.

I have ideas for a few simple changes in the kitchen that would greatly improve chemists’ performance. Standardised joint sizes on pots and pans would not only make all cookware interchangeable, but also allow you to incorporate elements like addition funnels and reflux condensers into your cuisine. Consider this low-tech saucepan modification.

Normally, when a protocol calls for something to simmer, you put a lid on the pan, turn the heat down to low, and rely on air cooling to keep the vapours contained in the pot. This arrangement is woefully inefficient, and volatiles are bound to escape. But if you simply place a bag of ice on top of the lid, you have something akin to a coldfinger, locking in the flavours and making for some tasty vittles.

I tried this experiment with two side-by-side batches of experimental chicken curry, feeding the product to my roommates in a double-blind study. Preliminary results indicate enhanced delectability with the modified apparatus. Another triumph for kitchen chemistry.

Dylan Stiles is a PhD student based in California, US.