How political is chemistry? The unexpected change in the nature of recent political discourse has highlighted the impact that politics can have on all of our lives. But what of the reverse? Should chemists be more politically active and direct their work toward political agendas? It is a question raised by the work of an American scientist who developed an exquisitely simple technique for monitoring air pollution. 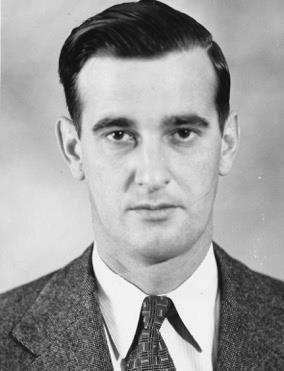 Edward Palmes was born into a family of modest means in Mobile, US. Although an excellent student, there was little chance of him being able to study beyond high school. But when his elder brother was offered a football scholarship to the nearby Spring Hill College, he signed on condition that Ed, too, would be offered a place. Ed jumped at the opportunity and kept up both top grades and solid athletics. He graded as the valedictorian of his year, having achieved the highest grades in both science and classics, before moving to Georgetown University in Washington DC to study biochemistry. Graduating in the middle of the second world war, he was deployed to Fort Knox, Kentucky, then also the home of the Armored Medical Research Laboratory. There, Palmes worked on the effects of extreme heat on soldiers; an important issue for troops confined to the baking interiors of battle tanks.

He published a series of papers detailing methods to determine the skin temperatures of subjects in confined spaces and developed a method for quantifying evaporative water loss from the skin of a person confined to a small chamber. The moisture content of air circulated through the chamber was quantified using infrared spectrometry; metabolism was monitored separately with a separate circuit for respiration. The experiments, which took between four and eight hours, at temperatures well above 30°C, sometimes with feverish patients, cannot have been much fun. As Palmes noted drily: ‘Satisfactory results were obtained during periods of “insensible” water loss, of profuse and highly variable sweating, and during violent shaking chills.’

While at Fort Knox, Palmes met two colleagues, Norton Nelson and Roy Albert, with whom he would develop these studies and who would become lifelong friends and collaborators. They began to examine the behaviour of gases in the lungs by using aerosols to understand pulmonary mixing, often conducting experiments on themselves. These papers typically bear the hallmarks of Palmes’ way of thinking. A simple physical principle was used to develop a method, underpinned by careful mathematical analysis, accompanied by careful calibration. This extended to the science fair projects he developed with his children. He once built an anemometer from an army surplus dynamo driven by four plastic bowls arranged round the shaft; the device was calibrated by strapping it to the roof of the family car, which they drove back and forth at different speeds. Another experiment, with son John, involved a set of weighing scales based on air pressure: a syringe was connected through a stopcock to either of two U tubes – filled with mercury and water respectively to weight heavier or lighter items. John recalls his father saying: ‘Science is all about figuring out how to measure something – but you have to know why you’re measuring it.’ 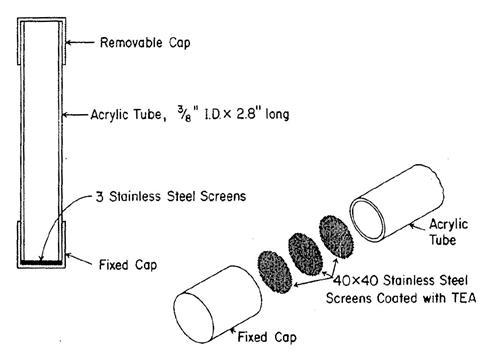 Nelson moved to New York University’s Department of Environmental Medicine and soon recruited both Albert and Palmes to join him. The work rapidly branched out into studies of carcinogenicity, looking at a wide range of potential chemical carcinogens as well as the effect of radiation. They conducted extensive animal studies and gradually developed an understanding of the deposition of inhaled chemicals and dust into the lungs. Around 1970, Palmes began to ponder the idea of chemical dosimetry, analogous to radiation badges. He had the idea that the rate of passive diffusion into a chemical trap might make this possible. By measuring the amount of material captured and using Fick’s laws of diffusion, it would be possible to work back to the average level of exposure in the wearer. Palmes asked his post-doc Albert Gunnison to test a prototype. They started first with moisture, checking the weight gain of a hygroscopic material. Confident that the principle was sound, they moved on to sulfur dioxide, then a major challenge because of its importance in air pollution. Then they turned to nitrogen dioxide.

A short plastic tube was equipped with a set of steel grids soaked in triethanolamine, a reagent routinely used to capture NO2 by conversion to nitrite. Caps at either end ensured that the grids were held firmly at one end while the tube could be opened at the start of the sampling period and then sealed again for transportation to the laboratory. The Griess diazotisation was used to generate a pink dye that could then be quantified by colourimetry. The method was so robust and simple that the tubes could be worn on a lapel. Palmes also used the tubes to ask whether gas hobs produced significant amounts of NO2 in the kitchen – some did.

Palmes had other projects and moved on, probably never realising the impact of his invention. Today, if you type ‘Palmes diffusion tube’ into any search engine, you discover that they are used across the world for indicative air quality monitoring of different gases. Increasingly, citizen scientists are using them to convince the authorities of the need to act on air pollution. In the UK, the Department for Environment, Food & Rural Affairs makes robust protocols available online.

If politics is sometimes described as the art of the possible, then Palmes showed us that those possibilities can – indeed must – be informed be the tools of science. After all, without data, we are blind.

I am very grateful to John and Monica Grabin (née Palmes) and to Albert Gunnison for their reminiscences and to Muki Haklay, Alom Shaha and Daren Caruana for inspiration.