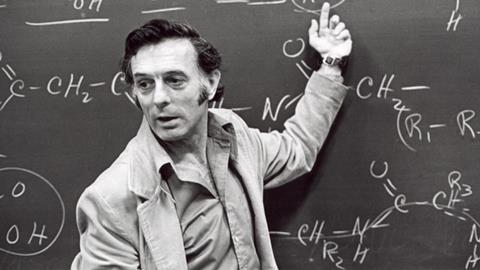 The apparatus that allowed us to isolate and study the impossible

Middle age can be tough. Years ago, I remember a seminar given by Martyn Poliakoff about the photolysis of transition metal carbonyls at low temperature. As he spoke of delicate noble gas complexes, a chemist in his 50s – who was clearly drunk – heckled Poliakoff, bellowing in broad Yorkshire tones that ‘It’s not real. You can’t put that in a bottle.’ The bizarre incident highlighted for me the way in which, through the 20th century, chemistry moved from the study of the ground state – starting materials and products – to the isolation and study of the fleeting intermediates and excited states that were being invoked to explain chemical reactions. 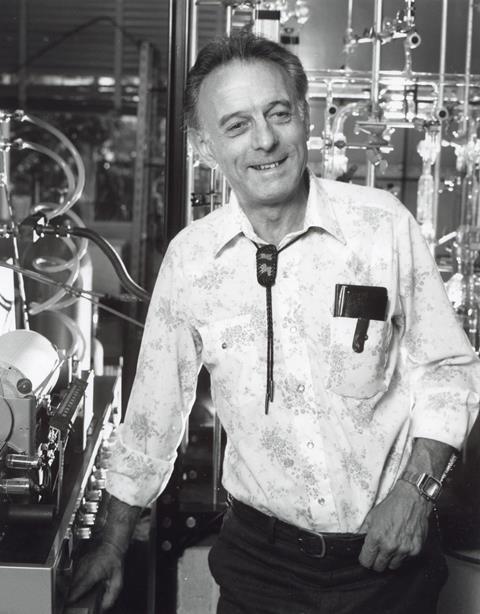 The period after the first world war saw the development of a raft of chemical techniques through the development of pumps, valves, cryogenics and, of course spectroscopy. Thus by the early 1940s the existence of unstable molecules like imine had been conclusively established by detailed spectra in the gas phase. These in turn confirmed many of the predictions of the new molecular orbital theory. At Imperial College London, UK, the young chemist Kenneth Stewart, working with the inspirational inorganic chemist Harry Emeléus, generated imine (NH) in the gas phase and began to explore its chemical reactivity. He condensed it onto liquid air-cooled traps, noting a blue colour that disappeared on warming; when co-condensed with benzene it generated aniline. The work ended when Stewart abandoned chemistry to enlist in the armed forces in 1940 – he would later become a leading nuclear weapons expert at the UK’s Atomic Weapons Establishment at Aldermaston. But he had planted a key intellectual seed.

At the same time, at the University of California, Berkeley, US, the American chemist Gilbert Lewis was exploring a curious phenomenon that had been observed since the 1890s in Germany: that dyes like fluorescein, when dissolved in frozen organic solvents or boric acid (a material notorious for forming glasses rather than crystallising), would phosphoresce for long periods. Lewis wanted to understand the photophysics and began measuring their spectra and decay rates. Crucially, he and his students developed a solvent mixture that gave a consistently clear glass ideal for both photolysis and spectroscopy. Consisting of ether, isopentane and alcohol, they called the solvent EPA. With it, Lewis and student David Lipkin reported a detailed study of tetraphenylhydrazine and related molecules, in which ultraviolet light was used to generate Ph2N. radicals that could be observed for many hours when frozen in the solvent.

The use of EPA as a medium for low temperature photochemistry spread quickly at Berkeley: the photochemist George Gibson (who had been PhD supervisor to Henry Eyring and future Nobel prize winners William Giauque and Glenn Seaborg) used the glass to study the photolysis of benzene at low temperature. The work was also noticed by one of colleagues, George Pimentel, a young and ambitious chemist who was specialising in the study of hydrogen bonding and structures of unusual molecules by infrared spectroscopy. Born in California, his father was a builder who had barely finished third grade, while his mother’s education had gone only part way through secondary school. But as a teenager Pimentel would cycle to Caltech, where Robert Millikan gave public lectures, and he was soon hooked on science.

Pimentel studied chemistry at the University of California, Los Angeles (UCLA). When he graduated in 1943, he was seconded to Berkeley and the Manhattan project – the development of the atomic bomb – where he worked on isotope separation with Wendell Latimer, another former student of Gibson’s. When the second world war ended, Pimentel did a PhD at Berkeley with one of Latimer’s students, Kenneth Pitzer, one of the pioneers of infrared spectroscopy. Pimentel hoped to extend the use of IR to the study of unstable radicals, and as he and his British postdoc Eric Whittle pondered the project, they came across a detailed vibrational study of ammonium halides by Donald Hornig at Brown University.

Hornig had constructed a copper frame, into which a flat slab of rocksalt could be mounted (see below right). The frame incorporated a thermally conductive copper block attached to a glass reservoir that could be filled with a cryogenic liquid to cool it to low temperatures. The entire assembly sat inside a vacuum jacket, so materials could be sublimed onto the window and studied spectroscopically. 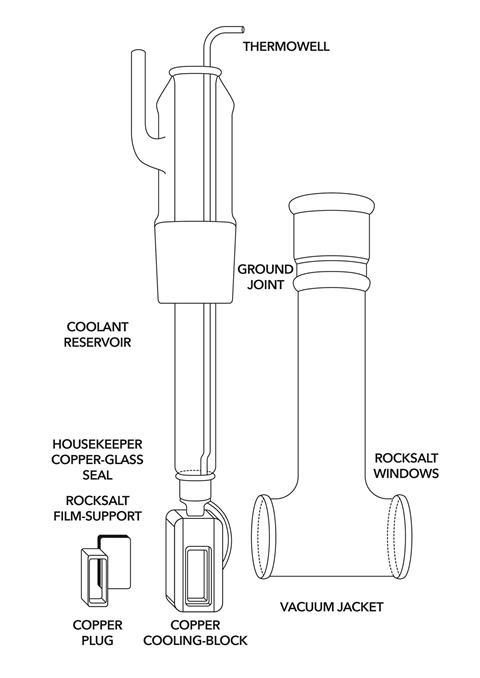 Pimentel, Whittle and graduate student David Dows decided to try to catch free radicals, including imine, formed in the decomposition of hydrazoic acid (HN3) using Hornig’s apparatus. But then Pimentel had an idea – why not use frozen but IR-transparent noble gases to delicately cradle the trapped radicals? After months of failure to get the conditions just right, Dows and Whittle demonstrated proof of principle by trapping NO2. radicals using frozen CO2.

They then moved to lower temperatures; with William Giauque’s low temperature thermodynamics lab nearby, supplies of liquid helium and hydrogen were plentiful. With its bigger heat capacity, hydrogen was a much more effective, if dangerous, coolant. Pimentel called their new technique ‘matrix isolation’.

A mere four days after the Pimentel’s paper was submitted in 1954, George Porter, at the University of Cambridge, UK, reported a very similar idea. Porter, who had developed the flash photolysis technique to study fast reactions in the gas phase, imagined being able to trap the intermediates using hydrocarbon or EPA glass. He and his American research fellow, Irwin Norman, designed Dewar flasks incorporating optically flat quartz windows. A solution of iodine in EPA, frozen onto the window, bleached beautifully on ultraviolet irradiation; the colour returned on warming, suggesting the splitting and recombination of the iodine molecules. Studies of many organic molecules would follow.

But Pimentel’s colder, vibrational approach that was the more structurally revealing, and caught on rapidly, especially as the group improved and optimised the apparatus to operate at the lowest temperatures. The spectral lines were sharp and the availability of isotopes made assignment straightforward. Jim Turner, a Pimentel postdoc in the early 60s, remembers the entire department being assembled at short notice for the electrifying announcement that Neil Bartlett had isolated compounds of xenon. Turner, who was in possession of Berkeley’s only cylinder of xenon, conducted experiments with fluorine in cold matrices of the element. Pimentel’s infectious enthusiasm – ‘Let’s try it!’ was his catchphrase – and his clarity of thought are beautifully captured in a short film that was made at the time (https://archive.org/details/research_problem_inert_gas_compounds) for Pimentel’s national CHEM Study education project (see below).

The education project also included an ambitious and influential textbook, Understanding chemistry, that was widely translated. The textbook was also memorable, however, for including a statement that rare earth chemists have never quite been able to forgive: ‘Lanthanum has only one important oxidation state in aqueous solution: the +3 state. With few exceptions that is the whole boring story of the other fourteen elements.’

Pimentel was not done with IR spectroscopy. Using molecules trapped in cryogenic matrices, he was able to demonstrate IR photochemistry, revealing for the first time how one could excite molecules to react in a specific way depending excitation mode. At the same time, he began to conduct flash photolysis experiments like Porter’s, but with IR detection. This required exceptionally fast and sensitive germanium detectors, along with cells with very long path lengths to detect radicals like CF2 and CF3. By rotating a grating at high speeds, it was possible to scan spectra at unprecedented speeds.

It was while using this ultrafast spectrometer in a multi-reflection cell to study the dissociation of CF3 I that Pimentel and his student Jerome Kasper observed a huge emission from atomic iodine that swamped their detectors – a serendipitous discovery that give birth to the chemical laser. Lasers based on the reaction of hydrogen with chlorine and fluorine followed, resulted in an explosion of understanding in chemical dynamics.

In 1969, Pimentel, then chairman of the chemistry department at Berkeley, applied to NASA to become a scientist-astronaut and was selected as one of the seven finalists. Although he never travelled into space, he proposed developing an infrared spectrometer for the Mariner 6 and 7 spacecraft to look for signs of life on Mars. The stringent low weight and power requirements were a massive challenge, but the instrument worked beautifully and provided the first detailed look not only of the composition of the atmosphere, but also of the ice caps and surface minerals. By looking at the intensity of the CO2 bands as the probes orbited Mars, the spectrometers also provided some of the earliest maps of the topography of the red planet.

Matrix isolation provided the ‘bottles’ to contain and study seemingly impossible species. That we are almost blasé about such studies today speaks to the success of Pimentel, Porter and the others who made it all possible. And a word of warning to anyone feeling too smug about Poliakoff’s heckler – if you’re not in the first bloom of youth, I bet there’s some technique around today that makes you feel uncomfortable, too.

I am grateful to Jeanne Pimentel, Jim Turner, Lester Andrews and David Dows for their reminiscences and corrections.