A look back at 175 years of agricultural experiment at Rothamsted

Harpenden, in the heart of leafy Hertfordshire, UK, has everything you might expect to find in a prosperous commuter town – the familiar shops, suburbs and services found on the outskirts of London. Look a little deeper, however, and you will find it is home to something different. Something unique.

Rothamsted Research, whose rural campus is a short walk from the busy high street, can trace its history back to 1843. Now, 175 years after its foundation, it is still going strong as the longest-running agricultural research institution in the world.

Lawes of the land 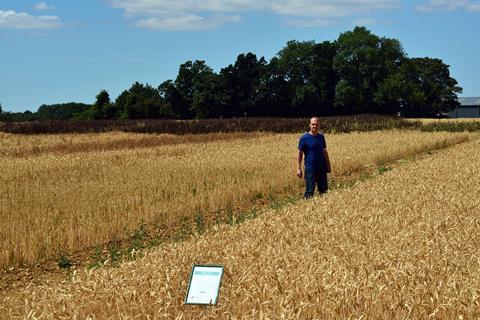 Jonathan Storkey is out standing in his field

John Bennett Lawes was born at Rothamsted – his family’s estate – in 1814 and grew to be a truly Victorian figure of science, business and enterprise. In 1842, he developed, and patented, the industrial process for making superphosphate, an artificial fertiliser manufactured by adding sulphuric acid to animal bones. Following this success, in the autumn of 1843 Lawes established a series of chemical experiments on Broadbalk, one of the fields on the estate, when he planted winter wheat in a grid of regular plots. Here along with his collaborator, chemist Joseph Henry Gilbert, he set out to compare different inorganic fertilisers with the traditional farmyard manure, which was the staple of farming at the time. Close to two centuries later, the experiment is still in progress – and still evolving.

While the broad effects of nitrogen, phosphorus, potassium, sodium and magnesium compounds on plant growth were already known, Lawes and Gilbert set out a series of planned field experiments to identify their respective contributions. This was not purely altruistic: the aim was to demonstrate the benefits of their superphosphate product. Now referred to as one of the ‘classical experiments’ of Rothamsted, the plots at Broadbalk demonstrated a new, methodical approach to scientific agriculture. This laid the conceptual groundwork for much of the agronomic research carried out around the world today.

‘We want to understand the effect of the treatments on the potential yield [of wheat], so we want to reflect what is happening in the industry,’ explains plant scientist Jonathan Storkey, one of the custodians, or ‘sponsors’, of the Broadbalk experiment. ‘We tend to grow the most modern cultivars, and try and keep up with what is being grown most widely. If you look at the experiment you don’t see how we used to grow wheat 170 years ago, you see modern cultivars – but the treatments have stayed the same.’

Storkey feels proud to be involved with such a long-term experiment. ‘It’s a tremendous privilege! And what I love on days like this, when the sun’s out, is to be able to go out to these long term experiments – which have been there for 175 years – and walk around, and see that history. But it’s a dynamic history, the experiment is changing and is relevant to contemporary questions as well.’

A short walk across campus is the climate-controlled archive store. Here, soil and plant material from the classical experiments and other trials are stored for future research. In the cool, windowless space the scale of the enterprise became apparent – with well over 300,000 samples being stored there. Here, among the collections are sets of glass jars, their printed ‘Rothamsted Soil’ labels painstakingly detailed in bold handwriting, holding soils samples from Broadbalk taken throughout the ages. They sit, stable and secure, waiting for the next researcher seeking to use these historical materials to advance our understanding of the environment. When paired with the yield, meteorological and other data now held in the Rothamsted Electronic Archive, the samples grant an insight into the critical human value of long-term experiments and appropriately funded environmental science.

Past the shade of an avenue of trees that lead past the manor, you can find the Broadbalk field itself. Here, in the height of summer, the different batches of winter wheat can be found swaying slightly in the breeze, its full heads of grain darkening in the heat. The difference in primary productivity between experimental treatments is, in some cases, clearly visible to the naked eye. Beyond the main plots, a patch of trees marks an interesting part of the experiment. Here, in 1882, a change in the experimental protocol meant nature was left to its own devices. The wilderness that resulted – a loose canopy of mature ash, sycamore and hawthorn trees – gives an insight into what this part of south-east England might look like without humanity’s intervention.

It would be interesting to see what these plots, and the wilderness, will look like in another 175 years.