Transforming our view of matter by transmitting electrons

A former student recently alerted me to a remarkable video. The grainy sequence shows a carbon nanotube inside of which suddenly appears a square array of dots that dances, buffeted by thermal motion, and grows steadily row by row to fill the tube. It is an extraordinary observation – the nucleation and growth of a crystal of sodium chloride imaged at atomic resolution, imaged using a transmission electron microscope, one of the truly transformative tools of the 20th century.

The century began with scientists uncovering the discrete, seemingly particulate nature of matter where everything was composed of discrete building blocks – nuclei, electrons, protons and neutrons – many of which could be deflected using electrical and magnetic fields. Among others, Johann Wilhelm Hittorf and Kristian Birkeland found that a circular coil could focus a beam of electrons down to a sharp point.

As cathode ray tubes began to be developed for display screen applications, work intensified. The physicist Hans Busch made calculations of the trajectories of electrons in a beam subject to such a cylindrical magnetic field. The result was a recipe for the construction of the electron equivalent of a convex lens. He demonstrated that varying the current changed the focal length of the lens. Although his paper marks the beginning of what today we call electron optics, the agreement of his calculations with his earlier experiments – more than a decade earlier – may have caused Busch not to follow the work up much further. 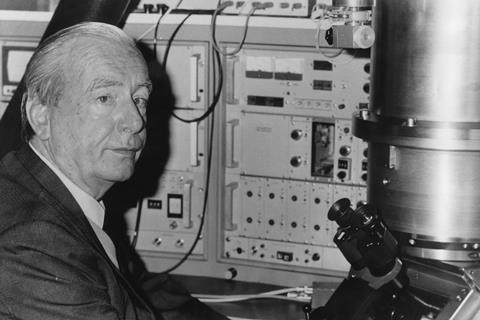 However, a young man, Ernst Ruska, would pick up the work. Ruska had rebelled against his academic father’s desire that he become a physicist and studied electrical engineering instead. In the summer of 1928, one of his professors at the Technical University of Berlin in Germany mentioned that he was setting up a research group to develop a cathode ray oscilloscope to image fast electrical processes. Ruska immediately volunteered.

Initially Ruska was given some vacuum problems to work on, but when it became clear that he rather enjoyed mathematics, he was moved on to the challenge of unpicking Busch’s calculations. Ruska built a rig with an electron gun and an appropriate coil and began to find that Busch’s theory was in fact rather good. After struggling with various coil designs, he added a soft iron core and found that he could achieve a good focus at much lower currents than before. He also obtained some intriguing images of the anode, which caught the interest of the group leader, Max Knoll. Together they began to explore different electrode designs including various electrostatic lenses, which gave disappointing results. Ruska instead focused into the pursuit of magnetic lenses and the idea of using them to record magnified images just as in a light microscope. Working by analogy he started to combine lenses in series and in 1931 obtained images of metallic grids with a 17.4x magnification.

It was only that summer that Ruska became aware of Louis de Broglie’s theory of wave-particle duality. Initially sceptical, it gradually dawned on him that this meant that the wavelength of the electron would limit the resolution of his device exactly as Ernst Abbé had predicted for optical microscopes half a century before. Some quick calculations convinced him of the staggering implications: if these ‘matter waves’ could be harnessed, the resolution of the images would be unparalleled. He and Knoll estimated that the ultimate limit would be about 2Å.

Pushed by his brother Helmut a biologist who was just completing his medical degree, Ruska adapted his designs. His problem was funding. He had been unpaid for some time, supported by his family. In the event Max von Laue secured him six months of funding – 100 Reichsmarks per month to cover a stipend and expenses. The result was a new microscope with a design resembling a slide projector. A beam of electrons focused onto a stage with the object under examination and then the beam was projected onto a glowing screen beyond. The design gave a magnification of 12,000x. Ruska would later joke that it was the cheapest electron microscope ever funded by the German government.

Over the next three years, Ruska would battle to convince others to turn his prototypes into a commercial instrument. He proposed that Siemens and Zeiss, seemingly a perfect combination of expertise, should collaborate on this. When this failed, Ruska went with Siemens, collaborating closely with his brother who was enthralled at the prospect of seeing biology in greater detail. Today there are a dozen manufacturers of transmission electron microscopes and many universities have electron microscopes scattered across departments exploring everything from insects and pottery to microorganisms and nanostructures.

Seeing the crystallisation video, I was left in a still unresolved superposition of emotional states. Time passes, our skin wrinkles, students get younger, and instruments come and go. But the thrill of an astonishing observation never fades.