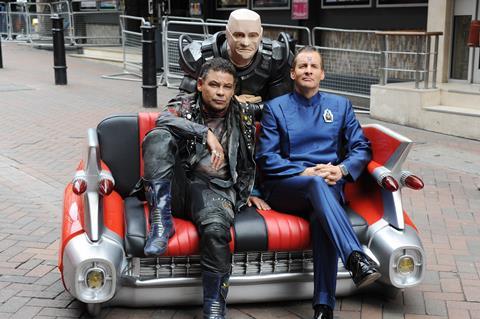 ‘But you’re one of us’, pouted my high school friend in disbelief, while we pretended to pay attention in rounders. ‘How can you not have watched it?’ That’s right: save for one film half-watched late at night as an undergrad, I have never seen Star Trek. I think my teenage peer was so outraged because we were both connected to a movement that also shows up repeatedly in science: nerd culture.

Although the words geek and nerd seem to have disparaging origins, by the time I was in high school they were names more likely worn as a badge of honour, even if being one unavoidably placed you into a particular clique. Some say geeks and nerds are different: the former has monomania over a particular favoured subject, and the latter is a studious individual of broader passions – so long as they’re maths or science. I’m not sure I really understand where the line between them is drawn, especially while it’s obvious that I am a chemistry nerd, but I could happily also identify as a cross-coupling geek.

Maybe that lack of precision is due to overlapping personality traits. The ‘one of us’ school friend group was composed of people who all had strong but differing interests: some liked anime, some were into sci-fi, I loved science. When I wasn’t interested in Series 5 of Naruto, and my friend wasn’t bothered about acetylcholine effects at the neuromuscular junction, we didn’t mind. Our friendships seemed to stem from being excited that someone loved intricate details as much as we did. Perhaps being enraptured by the detail of complex fantasy worlds has similarities to discovering and harnessing the universe’s secrets in a lab. After all, the structures and mechanisms that organic chemists picture and mentally manipulate are interpretations of the strange quantum realm by the human imagination, requiring much creative thought. And that’s influential: scientific and technological advancement happens when disbelief is suspended. Putting aside the learned dogma, what can we do that’s never been done before?

Naturally, a geek’s passion for anything fictional will spill over into their work. I recently discovered, to my delight, that my colleagues have a fleet of automation equipment named after classic sci-fi artificial intelligences. I particularly appreciate ‘Kryten’ and ‘Holly’ as references to cult space comedy Red Dwarf, a show I have actually watched, and love. Unfortunately, it’s more common that I spend time chuckling awkwardly through my incomprehension of mid-seminar in-jokes from Star Wars, Game of Thrones and Phineas and Ferb (whatever that is).

Including comments on pop culture in lectures comes with a risk: the sudden realisation that your knowledge isn’t as current as you thought. I’ve commiserated with academic friends brought swiftly down to earth by their witty Monty Python or Friends reference being met with blank stares by Gen-Z students. Even when I was a graduate student teaching assistant, only a few years older than most undergrads, I encountered a gap between us on discovering they were all listening to wildly popular music from artists I’d never heard of. No wonder they didn’t understand my Simpsons quips.

Confusing though it can be, a love of fiction inspires science in the same mode as interdisciplinary cross-fertilisation. Consumer gadgets like hoverboards and voice-activated assistants seem to be born from the idea that since it’s 2021, these surely should have been invented by now. Likewise, chemistry discoveries regularly stem from imagining something new, then making it happen. Eric Drexler thought of tiny nanobots that could self-replicate and manufacture other nanodevices: philosophies that are being made into reality by supramolecular chemists today. Intelligent androids have been dreamed up in stories since the early 20th century, but now various companies develop mobile laboratory robots that can learn about not only their environment, but the chemical reactions they run. And famously, August Kekulé is said to have been inspired by his literal dream of an ouroboros to understand the structure of benzene.

Referencing in-group cult media has the potential to be exclusionary, but more commonly, these excitable comments bring people together. Perhaps it’s because the geeks are the most welcoming of the schoolkid cliques – vibrant, bubbly and enthusiastic, even if you don’t quite understand what it is they’re enthusiastic about. Although it has the potential to turn into gatekeeping, generally the geek set is demographically diverse and particularly neurodiversity-friendly. Their references land akin to citing obscure science, maths or philosophy ideas from outside the field. To a geek, that’s just another thing to be excited about.