Producing oxygen and other gases from the atmosphere

As the plot of the Covid-19 pandemic continues to play out, it can be easy to forget the real horror of this disease. The sight of patients gasping for breath is chilling, and many have needed an additional oxygen supply. Producing this oxygen has been a key challenge of the pandemic, but one made easier by a technique developed in the 1950s by a man who specialised in separation.

Charles Skarstrom was born in 1906, the son of a leading professor of physical education. In 1924 he started a physics degree at his father’s old university, Columbia, in New York, US. He left in 1933 with a master’s degree to join Jesse Beams at the University of Virginia. Beams had begun to test a hypothesis made by Frederick Lindemann and Francis Aston that a centrifuge might be a means to separate isotopes in gases or vapours. Skarstrom joined the group just as difficult and dangerous work on enrichment in the heavier chlorine isotopomers of carbon tetrachloride was being prepared for publication. For his PhD thesis, submitted in 1939, Skarstrom scaled up the method.

As part of the Manhattan project to build the atomic bomb, Beams proposed using his gas ultracentrifuges to separate the fissile uranium-235 from the rest. Several patents under Skarstrom’s name, filed long after the end of the war, describe seals and bearings related to this project. However, Beams and his team were unable to develop a system robust enough to do the job, and the isotopes used in the weapons dropped on Hiroshima and Nagasaki in Japan were separated by more conventional gas diffusion through porous membranes.

After the war, Skarstrom got a job with Standard Oil, later Esso (today ExxonMobil), working in their research labs beside the legendary Bayway refinery in Linden, New Jersey. Bayway was one of the earliest integrated refineries; the first petrochemical, isopropanol, was produced there, and it was the home of one of the earliest catalytic crackers.

Skarstrom worked in the analytical separations team and his early patents deal with gas chromatography and issues related to olefin polymerisation and jet engine combustion. But in 1956 everything would change while he was trying to optimise a method for removing moisture from air. This method passed air over a column packed with adsorbent material. When the material became saturated, the flow would be switched to pass the gas through a second, identically packed column. Meanwhile, the first column was heated to desorb the moisture, with a small portion of dry gas used as a purge to drive off the water. Thus the two columns were alternated on a heating-cooling-adsorption cycle of 12 hours, set on a timer. 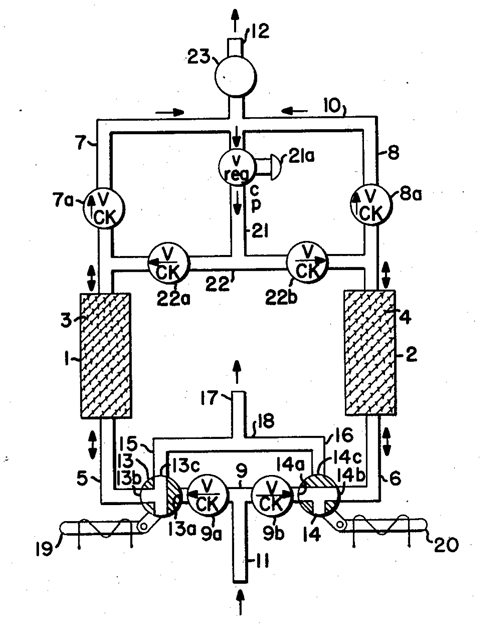 Fatefully, the heater cartridge for one of the columns failed. Reluctant to wait for a replacement to arrive, Skarstrom decided to run the apparatus without the heaters. Not needing the long cooling time, he set the timer to switch every 30 minutes. The apparatus still reduced the moisture in the gas feed. Intrigued, Skarstrom shortened the cycle further, observing the emerging air was drier at shorter cycles. In this adiabatic process, the heat of adsorption was never lost, making it possible to desorb the water by dropping the pressure and purging.

Skarstrom tried different adsorbents. In his patent he lists everything from activated charcoal to tissue paper, as well as the newly discovered synthetic zeolites that were known for their huge surface areas. Depending on the zeolite chosen, his process could produce gas significantly enriched or depleted in oxygen. Volatile hydrocarbons could also be separated. His method of ‘heaterless fractionation’, with all its potential to provide medical oxygen and nitrogen for food preservation, was featured in the New York Times’ weekly patent review. It would later come to be known as pressure swing adsorption.

Unbeknown to either Skarstrom or his patent agents, in 1953 Heinrich Kahle, working for Linde in Germany, had developed and patented exactly the same thing. This was revealed in 1970, the year Skarstrom retired, when Esso sued a competitor for patent infringement. After reviewing the entire process and dissecting both the principles and the apparatus, the judge threw out Skarstrom’s patent for lack of novelty. What Skarstrom thought of this will probably never be known. He died in 1984.

Pressure swing adsorption is now routine. It can be used to deliver nitrogen to chemistry labs and oxygen to glassblowers. It is proposed for carbon dioxide capture from cement plants and steelworks. And over the last few weeks the Indian Air Force have delivered over 11,000 oxygen concentrators to hospitals across the country to save countless critically ill patients. Perhaps Skarstrom’s idea wasn’t completely original, but it was pretty clever.