There were some inevitable names among the candidates for Chemistry World’s ‘quotable chemistry’ competition – Primo Levi, Peter Atkins, Robert Woodward. But others were less predictable, among them Fyodor Dostoyevsky, Emily Dickinson and Geoffrey Chaucer. And few might have expected to find Richard Feynman, who never showed much obvious enthusiasm for chemistry. That was not, however, because he disdained the subject; rather, he generally gives the impression of being in awe of it, as many physicists of profound theoretical acumen turn out to be. 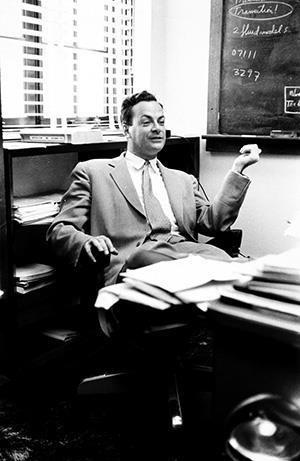 These folk are typically of a Platonic mindset, reveling in what they regard as the crystalline beauty of physical theory, with its deep principles of symmetry and universality. To them – certainly to Feynman – it seems as if the ability of chemists to make sense of the messy complexities of molecules is akin to magic. Feynman’s brief digression into chemistry near the beginning of his famous Lectures on physics (recently prepared in a lovely online form by a team at the California Institute of Technology) is a joyous paean of faux-naïveté, what Feynman would doubtless have regarded as a wildly simplistic portrait replete with Daltonesque molecules swapping atoms. It is as good an example as any of Feynman’s lucid directness, which cuts to the core of the matter without for a moment relinquishing the sense that he’s just chatting to you over coffee.

It is from this section that Feynman’s quote is taken. He is explaining what the molecules responsible for the odour of violets are like: how their atoms are arranged. ‘How does the chemist find what the arrangement is? He mixes bottles full of stuff together, and if it turns red, it tells him that it consists of one hydrogen and two carbons tied on here; if it turns blue, on the other hand, that is not the way it is at all.’ That is a wink to the chemists: this is how we physicists think about what it is you do. And we marvel at it:

‘This is one of the most fantastic pieces of detective work that has ever been done – organic chemistry… The physicist could never quite believe that the chemist knew what he was talking about when he described the arrangement of the atoms. For about twenty years it has been possible, in some cases, to look at such molecules by a physical method, and it has been possible to locate every atom, not by looking at colors, but by measuring where they are. And lo and behold!, the chemists are almost always correct.’

Unsurprisingly, that last line is the bit Chemistry World readers liked. But Feynman can’t resist teasing the chemists a little too, while pretending to defend them:

‘You see that the name of this thing in the more complete form that will tell you the structure of it is 4-(2,2,3,6-tetramethyl-5-cyclohexenyl)-3-buten-2-one, and that tells you that this is the arrangement. We can appreciate the difficulties that the chemists have, and also appreciate the reason for such long names. It is not that they wish to be obscure, but they have an extremely difficult problem in trying to describe the molecules in words!’

He elaborates on this remark in an audio recording of the lectures, delivered in 1961: ‘Why they don’t just draw the pictures all the time, I don’t know.’ Of course, more often than not, chemists do just draw pictures, contenting themselves with giving the picture a boldface number to serve thereafter as the name.

But we’d be wrong to suppose that Feynman steered clear of chemistry. As The quotable Feynman, just published by Princeton University Press, attests, he dabbled in his youth – for characteristically mischievous purposes. He soaked his mother’s linen towels in ‘sodium ferrocyanide, or something’, and put ‘an iron salt, probably alum [sic]’ in the soap. ‘She would wash her hands, and then when she dried them, her hands would turn blue.’ But naturally the towels turned blue too. ‘Anyway, she was horrified,’ Feynman admitted. ‘But she was always cooperative,’ he added. ‘She never was afraid of those experiments’ – even when, as he later admitted to an aunt, he risked blowing up the house.

Of course, Feynman made a far bigger bang – in several senses – in physics. But he still had a mark to make in chemistry, suggesting that the periodic table should end at element 137, at which point there should be no more electronic bound states – an idea stemming from the fact that the fine structure constant has the value of almost exactly 1/137. More detailed calculations suggest that this isn’t after all the limit for neutral atoms, but nonetheless I hope that if element 137 is ever made, the popular tradition of calling it feynmanium sticks. There is plenty of room in the periodic table for more physicists, especially ones who say that chemists are (almost) always correct.