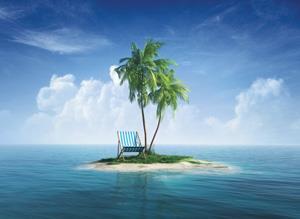 Chemists are still searching for the â€˜island of stabilityâ€™

2016 has started on a high for chemists, with the official stamp of approval for elements 113, 115, 117 and 118 effectively completing the seventh row of the periodic table. It’s pleasing to see chemistry get its moment in the media spotlight for once, instead of being overshadowed by its sexier siblings, physics and biology. Inevitably, it didn’t take long for this landmark to be somewhat trivialised with speculation on what the four new elements should be called – brushing aside the obstacles that the teams in Japan, the US and Russia, and many before them, had to overcome to get to this point.

Given the tremendous experimental effort involved, it’s natural to ask, ‘what’s the point?’ Those who made the new elements will be the first to admit that they are less than useless. But extending the periodic table is about more than filling in the empty boxes. Extending the periodic table extends our knowledge of atomic structure. It also brings hope of finding that long-sought home of nuclei that are both heavy and stable: the ‘island of stability’. And if we come to find that synthetic elements do have a use, that’s a bonus: Americium, first made in 1944, now features in smoke alarms and is being explored as a cheaper replacement for plutonium in space batteries.

Elements 114–118 were all made by bombarding actinides with a beam of a neutron-rich isotope of calcium, but that method is unlikely to give us elements 119 and 120. To reach the next row of the periodic table, scientists need to come up with even heavier, but stable, projectiles or even a new plan altogether. Creating synthetic elements and understanding their chemistries can only follow technological progress – that is going to remain true for new elements further down the line. And every time chemists complete another piece of the puzzle, there’s an opportunity to scrutinise and refine the chemical models pacing ahead of our experimental limits.

Then there’s the question of what these elements will even be like. The newbies are likely to have properties so dependent on relativistic effects that they will feel decidedly out of place among the companions grouped at their allotted spaces in the periodic table. And then it’s only natural to question the limits of the table itself and how it copes with bearing the weight of each extra element. Then again, seaborgium (106), bohrium (107) and hassium (108) all seem to behave as expected. However the new elements turn out, they’re a healthy reminder that the periodic table is a live document and that we haven’t yet reached matter’s limits.