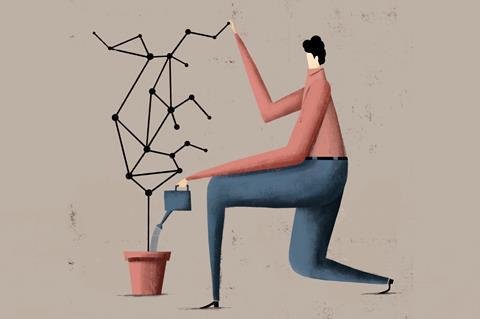 Recently, I had a chat with a chemical society, on the subject of leadership in the UK chemical industry. The hour consisted of situational questions on subjects ranging from teamwork and communication to change management for innovative technologies. Many of my responses naturally drew on experiences from activities outside my labwork and data work. I discussed internal project management, coaching a team of students to run seminars, and judging prizes with the RSC. Even when my answers did draw from technical work, for example discussing a recent setback, the answer I gave focussed more on the networks of people I needed to draw upon to fix it, rather than the details of how a new web tool was built and implemented. This active encouragement of service and community work was the opposite of what I came to expect as a student. While I am sure the world has not changed a great deal in its attitude since then, I have noticed a seismic shift in the responses of the people I most often associate with as I have grown and moved between different chemistry communities.

Nine years ago, I was anxious to discover how I could present myself as a strong candidate for graduate studies. A well-meaning and exalted professor instructed me to emphasise ‘outreach’, since admission committees look well on it, apparently. So, when applying to multiple US institutions for graduate positions, I showcased two main external activities in my CV. The first was inviting leading scientists from around the UK to give cutting-edge seminars, with a wonderful group called Oxford University Scientific Society. The second was some education work I’d done during university holidays, at the Catalyst Science Discovery Centre in Widnes, UK, which amazingly is within walking distance of my parents’ house.

Surely, I assumed, the former of these could only be considered a good thing, given that every academic department hosts similar seminars, usually organised by faculty. And I believed the second at least proved enthusiasm for the subject. Given the notable professor’s advice, I was surprised to discover through the sarcastic comments of a professor that both could be held against me. It seemed unfair to be judged on what I did in my own time! While some of my new cohort had been playing football, enjoying board games, or dancing with no academic penalty, it was made very clear to me that my experience was an unacceptable waste of time.

Are students not supposed to be trainees rather than grunt workers?

Now, years later in my industry role, I find that external influence is celebrated. And for good reason – both career development and networking gain from ventures like conference organisation. Of course, there is a limit to how much a scientist can continue to develop their skills by performing a single task such as chairing meetings. However, the networking benefits of meeting different people each time tend to accumulate. I now participate in service activities both within my company and as part of external, cross-industrial groups including academics. I assume that unlike my student cohort, these academics are rewarded in their careers for these efforts. However, are students not supposed to be trainees rather than grunt workers? I recall students sneaking surreptitiously out of the lab to attend the personal development workshops they hoped would support growth towards their future careers. Regardless of their desired job, students are training as researchers, and in my experience, research flows more smoothly with a foundation of broader skills. The web tool I described above would not have been created were it not for scientists networking, communicating with programming experts, and daring to admit they did not know everything.

The antipodean shift around me has led to some cognitive dissonance over the years and resulted in a steep and tumultuous learning curve. However, I can adamantly confirm that I have never been so supported in science community work, and that its benefits to my technical work are immeasurable. As I pointed out in the society interview, great leaders and team workers appreciate the broader picture of how their team fits in with other departments and the wider world. Now, leaders regularly ask to reap the benefits of external groups I’m in, for collaborations or entry-level hiring.

Since moving into industry, I’m glad to have returned to community work. It is enjoyable, occasionally involves interesting travel, and most importantly, results in positive change. In my first couple of working years I got particular benefit from working with cross-industrial chemists, which allowed me to learn how pharma functions and what varied at other companies. Likewise, working alongside academics has led to collaborations that may not otherwise have been considered. I believe that no matter their career stage, scientists should be supported in giving back.