Colouring in the diversity in Stem 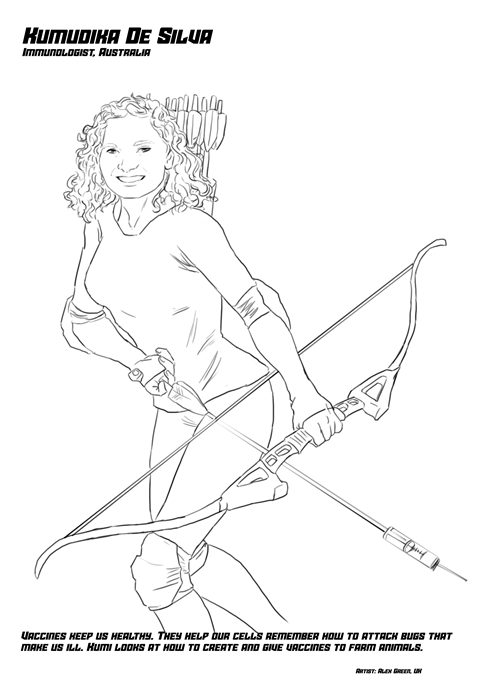 Superheroes have long captured the imagination of children in the pages of comic books and on screen. Magical powers, bright capes, superhuman strength and a sense of adventure are all part of their enduring appeal. Science historian and writer Kit Chapman conjured a plan to emulate this excitement, but for real-life scientists.

‘I remember as a kid, I used to love doing colouring books, but I could never find something to do with science or history or something that I was really interested in,’ Chapman explains.

He was inspired by Semarhy Quiñones’ beautiful colouring book Types of Scientists: A Coloring Book for All Ages, which brings science careers to life through line drawings of women in an A–Z of different roles. Chapman wanted to ‘take this a step further’ by reimagining scientists as superheroes in his Stem Heroes project.

Following a Twitter call-out for scientists to take part, Chapman set about commissioning artists to turn them into a set of colouring-in characters. Kumi de Silva, a senior research fellow and ruminant immunologist at the University of Sydney, Australia, was one of the scientists who volunteered.

‘I thought it was just a really fantastic idea, so I sent off an email to Kit telling him a little bit about myself and why I was interested in taking part,’ says de Silva. ‘I think visibility of a diverse community of scientists is really important … I think the profile of women scientists is slowly increasing in the media, but there’s not a lot on diverse communities; on ethnic minorities who are working within this field as well.’

De Silva, like all the participants, shared some ideas for her character and how it might represent her science. As a researcher currently focused on the targeted delivery of vaccines, de Silva was quite clear on her character’s scenario.

‘In my mind it had always got to be an archer,’ she explains. ‘This idea that we could have the arrows looking a little bit like a needle, which is the traditional way of delivering vaccines, was kind of interesting as well.’

Originally, de Silva was keen to leave the interpretation to the artist but was surprised to find that she changed her mind. ‘As soon as I saw the first version it’s like, “I have opinions about this, I can’t show myself to the world like this, I don’t want to be represented like this,”’ she says. ‘So, that was an interesting feeling for me as well, because suddenly I felt like I needed to have a bit more ownership about how I was being portrayed.’

The original design was ‘a Marvel hero or Avenger type of person wearing a tight outfit and being almost very aggressive in the stance,’ explains de Silva. ‘It was not at all how I see myself.’

An initial tendency for some artists to ‘over sexualise’ some scientists led Chapman to draw up a list of guidelines, which also urged artists to accurately represent body shape, ethnicity, gender identity, sexuality and disability.

Although not someone who typically likes to be the centre of attention, de Silva was very happy with the final version and shared it with friends and family to a positive reception.

‘Even those without young kids any more came back saying “This is fantastic,”’ she says. ‘And they liked all the other pictures as well, because there was such a vast array of people – people with different types of disabilities and abilities in there as well. They were really quite excited about it.’

Chapman has been delighted with the response to the project too. The free colouring book has been downloaded around 600 times already, with many more website views. Several enthusiastic colourers have also shared their work with him. ‘That’s my favourite thing!’ he laughs.

The project is another important way of communicating science for Chapman (who you might recognise as a former comment editor for Chemistry World), alongside his writing, public talks and radio appearances. ‘I think that when it comes to science, the communications that succeed best excite us and excite something within us. It’s not trying to teach you science necessarily. It’s trying to inspire you to look further,’ he explains.

‘One thing I wanted to do with the colouring books was to excite people, to capture their imagination, to make them think about science in a different way. And more importantly, make them see that they can be scientists as well, that it isn’t this separate topic that you have to learn, that it’s something that you can embrace and be.’