I've been thinking a lot about hydrogen recently 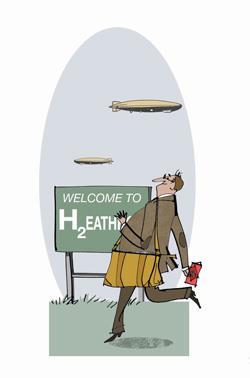 I’ve been thinking a lot about hydrogen recently. Hydrogen has been around since the big bang itself and still makes up over 75 per cent of the universe. It even warms our planet by fuelling our sun. But for such a fundamental, inspirational element, we worry a lot about it.

The light little gas sends rockets into space and could replace petrol and propel our cars. But hydrogen was used in transport years ago, in airships, and it was an airship that led to lots of the worries about hydrogen. The image of the burning Hindenburg crashing to the ground is seared into the popular consciousness.
Hydrogen = bad.

Of course there’s still some controversy over the Hindenburg, even conspiracy theories. What caused the spark and was it even hydrogen that was the initial fuel? Even if we take the established view of the disaster - an electrical spark, either from static charge or lightening, ignited vented hydrogen - the whole hydrogen fire would have been over in a moment. The diesel and fabric of the airship then ignited and continued to burn as the ship crashed to the ground.

I would love to see the rebirth of the passenger airship. I’ve spent too long cramped up in metal tubes surrounded by explosive fuel, why not float above the planet in a more civilised fashion? Able to walk around, sleep and then arrive refreshed at your destination.

In fact, you could use the airship as a destination in itself. Instead of all travelling from around the world to a conference centre, why can’t your conference centre come to you? Orbiting above us, we could all get shuttles up to the airship as it passes overhead, mix for a week and then disembark back where we started, or at another destination. It perhaps sounds like science fiction, or the foolish dreams after one too many drinks at a poster session, but it wouldn’t be the first time science fiction has inspired science reality. Why can’t we reinvent the airship?

In fact, I’m not the only one who thinks it’s a huge shame that we don’t travel by airship these days. Various companies, from defence giant Lockheed Martin to small British engineering companies are starting to back the technology. Although they’d rather you called them dirigibles thank you very much, airships are very Hindenburg. And no, they don’t use any nasty hydrogen, it’s helium all the way for these modern beasts.

Helium: that makes sense, a completely inert gas that we know can sail up into the sky in balloons. And helium filled blimps have been used in research, or for advertising for years. But we all know that one mole of helium is twice as heavy as a mole of hydrogen and that reduces the lifting power of the gas. Not by a factor of a half, but helium has a lifting power of about 90 per cent that of hydrogen’s and when trying to stay in the air that could be a worry, although perhaps modern aeronautical engineering can help to negate this problem. I worry more about the expense and the potential of running out of helium. Like oil, helium is a finite resource and only last year Robert Richardson warned we could run out of the gas in 25 years. If that’s true, is a technology using the gas really a good idea? Would a mix of the two gases help, hydrogen and helium together, would that be less explosive but lighter? Maybe, but it seems that after the Hindenburg, several countries have banned the use of hydrogen as a lift gas so at the moment it’s academic.

So if we can reinvent the airship can’t we also save the reputation of hydrogen? Make it less of a scary option? Whether or not I ever get my airships, I think it’s time hydrogen came in from the cold.