Sulfur or sulphur? The controversy over the spelling of element number 16 rumbles on

Sulfur or sulphur? The controversy over the spelling of element number 16 rumbles on, but Chemistry World  ’s excuse that they’re just following instructions (May 2010, p41) overlooks an etymological journey that takes the linguistically curious chemist from ancient Greece to Rome, across Europe and the US, before arriving at the very centre of the solar system (sort of).

In UK English, the two letters ’ph’ that sound like an ’f’ are generally reserved for words of Greek origin, like photography and pharmacy (though we are not always consistent on this because, on that basis, fancy should be spelt phancy). The distinction arose when the Romans transliterated from Greek into Latin - there were subtle differences in the pronunciation of the Greek  f (phi) and the Roman ’f’. In early Greek,  ’f’  was probably pronounced like the German ’pf’ (as in pfennig) but by the second century BC it was probably more like the sound you would get by blowing through your lips.

The Latin ’f’ was more or less the same as the ’f’ in modern English, which involves both the lips and teeth. The sounds became indistinguishable, so that in medieval Latin and some of the languages derived from it f was almost universally used.

The word sulfur is of Latin origin. So, etymologically, sulphur was always inappropriate. Historically both spellings have been used. Judging by the examples quoted in my copy of the Oxford English Dictionary, both spellings were used about equally from the 10th to the 16th century, but then sulphur took over. It appears that, from the 15th to the 17th century, scribes substituted ’ph’ for ’f’ because they mistakenly thought it made them look more learned. 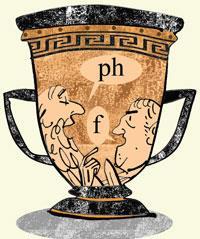 Just as the French, Germans and Americans respectively spell the number represented by the symbol 3 as trois, drei and three, so speakers of the same languages spell the element represented by the symbol S as soufre, Schwefel and sulfur. There is a lot to be said for using symbols to avoid transatlantic arguments. The RSC adopted the spelling sulfur in 1992, to fall in line with Iupac (see box) recommendations. The British Standards Institution followed suit in 1993. We could have gone completely systematic and called it unhexium, based on its atomic number, in the way Iupac rules require newly discovered heavy elements to be named. The approved Iupac name for the element unpentium is phosphorus, which is etymologically appropriate given its Greek origins.

Use of the spelling sulfur is often seen as an Americanism, but although the spelling has been common in the US for the past hundred years, the Americanism label is hardly accurate. Another famous chemical Americanism is aluminum - element number 13. That is closer to deserving the title, except that it was the name given by an Englishman, Sir Humphry Davy. The chemists of 19th century Europe preferred the name aluminium, and that became widely adopted. But in the US, aluminum was the norm, confirmed by the American Chemical Society in 1925. Iupac officially adopted aluminium in 1990, but 3 years later allowed aluminum as an acceptable alternative. I see no logic in that. All the metals, except those known from antiquity, end in -ium, so the word aluminium makes more sense.

But then why do we all call the element with atomic number 2 helium? It is not metallic and all the other noble gases have names ending in -on. Astronomers first detected it in 1868 in the solar emission spectrum, and Norman Lockyer named it helium as he assumed it must be a metal. Now that we know better, helion would be much more logical.

In German, all nouns - including the word for sulfur - begin with a capital letter. Iupac is spelt as a word - with lower case letters - because it is pronounced as a word.