The language of chemistry has changed greatly during my lifetime 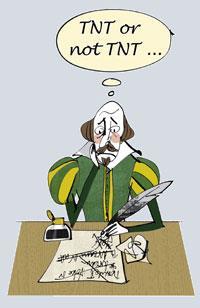 The language of chemistry has changed greatly during my lifetime. I started by calling C2H5OH alcohol; then I learned to call it ethyl alcohol and then ethanol. I used to call the welding gas acetylene, but then learned to call it ethyne. I used to talk of methylene dichloride, but now call it dichloromethane. What I knew as acetic acid has become ethanoic acid, urea is carbonyl diamide and acetone is propan-2-one. Dihydrogen monoxide is still water; but I fear that many students of chemistry have to master a double vocabulary - the modern systematic one and the traditional names. They will need those traditional names to make sense of the old literature. In the same way, nearly every ’Britisher’ has to be fluent both in the local dialect and in Standard English, and to know the difference.

The same sort of problem occurs even in ordinary language. Many common verbs are irregular - they were there before the grammar got formalised. In English, I am, thou art, he is, we are and so on are too ancient and strongly established to shift. By contrast, chemistry is very recent and advances steadily and new systematic nomenclature has overriden the old language. I can see the point. When a chemist has to face many millions of substances (as all modern chemists do), it’s easier to use a shrewdly chosen set of names combined with a set of rules to define the name of a new compound. And a systematic name generally gives useful information about the molecular structure of the stuff being named. Even in the old days we tried. Acetic acid and the acetates, acetone, acetylene, acetyl chloride and so on, were an attempt to give useful clues to structure. Long gone are the days when chemists were glad to make anything new and named it how they liked. Glauber’s salt, Fremy’s salt and so on are pure history. But antiquities such as urea, oxalic acid, ether, chloroform, iron pyrites, are still used by professionals and industrialists under those names and are probably destined to enjoy much further practical life yet - except perhaps in the professional literature.

And yet I feel that some sort of chemical poetry is retreating. I mourn the loss of a name like styrene: ethenylbenzene just does not have the same magic. Similarly, the xylenes have a style that the dimethylbenzenes simply do not. I cannot define chemical poetry; but somehow or other it’s there. Thus paraffin has a poetic magic quite apart from the classification of hydrocarbons and silica has an appeal unrelated to a set of bases. Furthermore, many trade names seem somehow to gain by being named after raw materials. The polyester fibre Terylene gains something from its relation to terephthalic acid. Calling it Mylar just loses that resonance. And the old names for dyestuffs were often wonderful! I still love Caledon Jade Green and Arionor Mahogany.

Even dry sets of initials can have a strange chemical poetry. Polytetrafluoroethylene is Teflon in America; in Britain it is PTFE. I sense that the latter is somehow more poetic. The military explosive TNT has violent literary power and the insecticide DDT seems to have built up an ominous poetic resonance. The glory days of DDT were during the second world war and in 1948 its inventor Paul M?ller of Geigy was awarded the Nobel prize for physiology and medicine. Incidentally, it has the only chemical name I know which fits perfectly into a poem. It features in a limerick, submitted by D E Perrin of Canberra to the May and Baker Laboratory Bulletin  of 1959. It was part of a competition posed for that Bulletin by Bombalurina, whoever he was. Fittingly, it won.

A mosquito was heard to complain
That chemists had poisoned his brain.
The cause of his sorrow
Was para  -dichloro
Diphenyl trichloroethane.