The old carbon-filament electric lamp was essentially a fine graphite filament in a vacuum. You passed a big current through the filament, heating it so it was white-hot and making it give out light. The concept was developed by the British physicist and chemist Joseph Swan, along with Thomas Edison in the US, and it became the first electric incandescent-filament lamp. The British admiral Lord Jellicoe chose it as a lamp for battleships, because even the shock and concussion of firing the big guns did not put it out - unlike potentially dangerous candles or oil lamps. 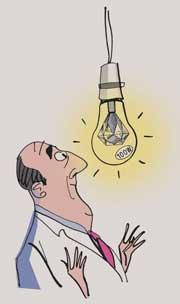 Sadly, the novel lamp did not last for ever. The hot graphite of the filament slowly evaporated, and the carbon vapour condensed on the relatively cool glass bulb. By the reverse process to sublimation, the vapour condensed to form a thin graphite film, which slowly gave the lamp a light-absorbing inside layer.

This limitation might have surprised the great German chemist - and 1909 Nobel prize winner - Wilhelm Ostwald. He observed that when materials crystallise (either from vapour, liquid or solution) they make the smallest possible energy change. The solid of highest energy is formed preferentially, which explains why phosphorus vapour condenses to the energetic white solid rather than the less active red form. However, he did note that materials might pass through several high-energy states before settling on one a chemist could spot, as long as the energy ladder down to those lower energy states involves easy transitions.

On this basis, you would expect carbon vapour to condense not to graphite but to the higher energy diamond. Furthermore, a diamond is forever! It would not descend further down the energy-chain to give graphite, since the activation barrier is too high. Ostwald might have expected a carbon-filament lamp to deposit a transparent diamond layer on its envelope. As it aged, it would continue to transmit light and gain in value.

I like the prospect of getting carbon vapour to condense to diamond, which is both aesthetically and economically appealing. But how might it be achieved? Carbon is also thrown out by certain ’carbon stars’ - which emit carbon rather as our Sun emits a hydrogenic solar wind. The best-known carbon stars have rather a cool surface (compared to our Sun, for example), and seem to emit small solid graphite particles. Perhaps a very hot carbon star would put out real carbon vapour, and maybe that vapour would condense to diamond? I love the idea of a carbon star surrounded by diamond planets, each growing steadily by the capture of carbon vapour from the star.

This, however, brings up a chemical problem I have been dodging - what exactly is the molecular composition of carbon vapour? One major component seems to be C3 clusters, but single carbon atoms and C2 molecules are also known, as are larger ’clumps’ such as C60 (the famous buckminsterfullerene). What are the structures of the clumps in carbon vapour? Are any of them potential precursors of diamond?

Another way into the problem may be to consider those strange explosives, the metallic acetylides. Copper, silver and gold acetylides are easily made by combining acetylene gas with an appropriate metal salt in ammoniacal solution. The explosive acetylide precipitates and can be filtered off, washed and (if you are brave enough) dried. These explosives are very sensitive, yet are composed solely of metal and carbon. What do they explode into? Metallic powder and carbon vapour is my guess, although only a very intrepid chemist could catch that vapour, since it must condense almost instantly to the solid - diamond or (more likely, alas) graphite.