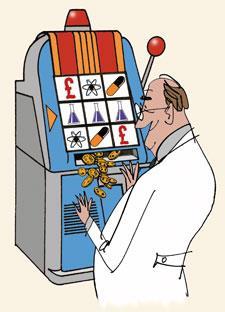 There are a number of laws that govern the behaviour of systems. More fundamental than those laws suggested by Einstein or Faraday, are the paradigms derived by Murphy and Sturgeon: ’anything that can go wrong, will go wrong’ and ’ninety per cent of everything is crud’. Another, taught in first year computer programming classes, is ’garbage in, garbage out’. Unfortunately the lawyers and historians who make up our ruling classes have never attended a computer class, so it didn’t occur to them to outlaw the packaging of mortgage loans to the unemployed as collateral for new loans. The ensuing disaster has meant that funding for any public project is now in short supply. Research funding is, not surprisingly, in danger again.

This means that now, more than ever, it is important to ensure the distribution of research funds is made as efficient and fair as possible. The present system involves defining a problem and writing grant proposals, followed by assessment and peer review. A process that can be simplified to: what’s the problem or what product do we need, and who is the best person to do the work or who has the best track record?

In an ideal non-Murphy world, this approach would work like a charm. However, in the real world matters are somewhat different.

Snag 1:  A number of world changing ideas have arisen by chance or by giving someone the opportunity to investigate an idea they find interesting. Examples include Viagra, the internet, Post-its, polytetrafluoroethylene (PTFE) and the lotus effect. Naturally, the present research funding approach may also throw up some unanticipated results and products, but is it the most efficient way to find the unexpected? Google, one of the most successful companies in the world, expects all its engineers to spend 20 per cent of their time working on a project of their own choosing.

Snag 2: The prize goes to the group with the best written grant proposal. Preparing proposals has become a major industry, with the online booksellers Amazon UK offering more than 1000 books on how to write the best proposal. This means that scientists need to spend a considerable fraction of their working time scheming to get their hands on funding.

Snag 3: Some of our best scientists are leaving science. The decline of research, development and manufacturing in the UK in favour of financial services was due in part to the creaming off of the brighter brains by the ’casinos’ in the City of London. In addition, under the present system, active scientists and engineers are taken away from the laboratory and design office to assess and administer other projects.

Is there a cure? Perhaps we should remember the words of Rowland Hill, ’why should the devil have all the good tunes?’ and follow the example of the stock exchange. My suggestion is to set up a lottery to distribute research funds. The research organisation would simply enter the lottery to determine whether they received a grant or not. At the end of the project the happy winners would need to present certified accounts. Please note I’m not suggesting mimicking the UK MPs expense system!

The advantages of a lottery are a huge reduction in administration and less researchers’ time spent writing proposals.

If this suggestion is considered too extreme, perhaps we could just finance a proportion of research in this way - say 10 per cent or less. This could lead to a long term, one to two century long, research project to assess the difference in quality of products developed through funding by the lottery and those paid for by the present day peer assessment system.

If I could only find a body to fund this proposal...